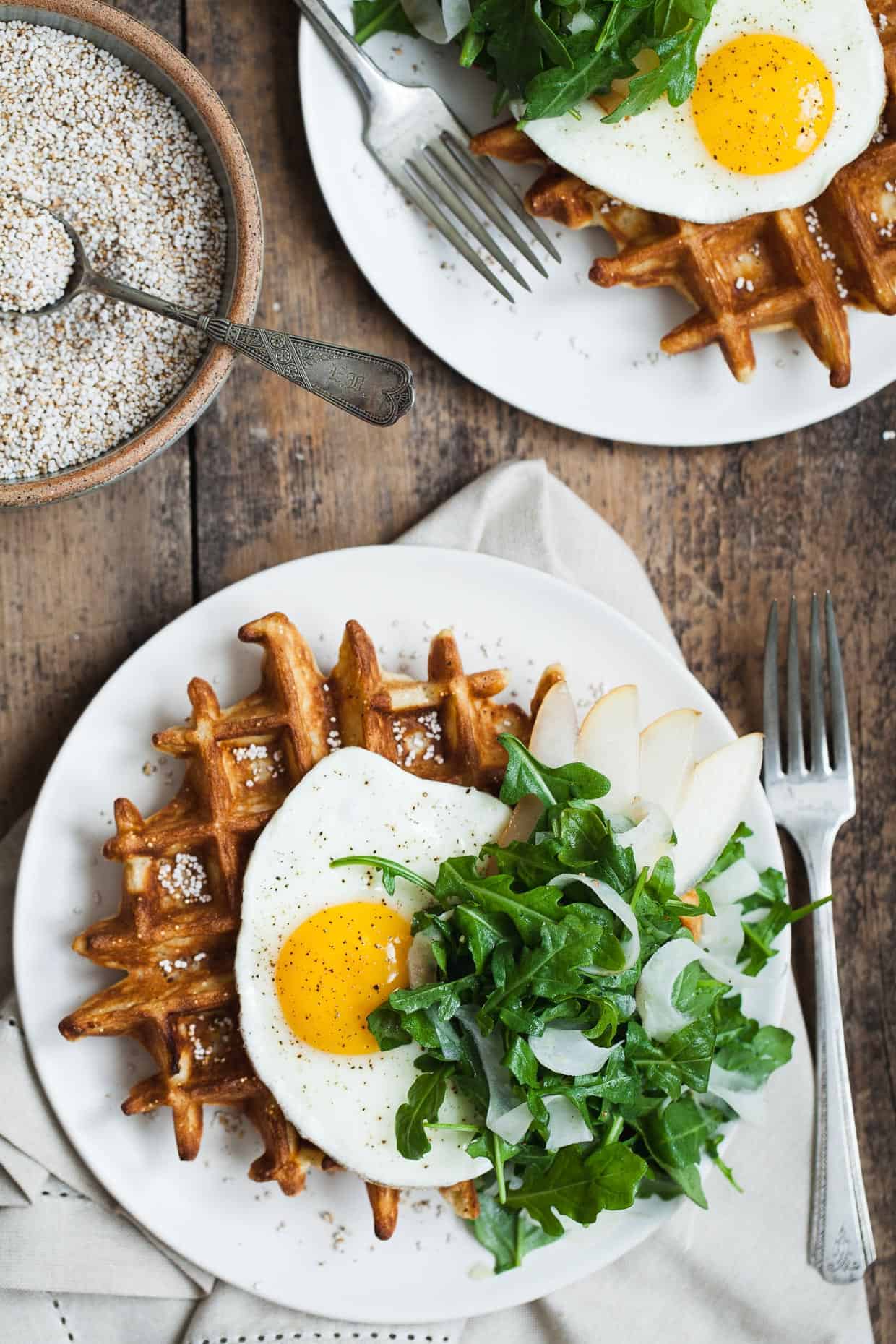 I wanted to wax poetic about these gluten-free savory amaranth waffles because they deserve a sonnet, but then I sliced open the tip of my index finger on the blade of the food processor today, which is proving challenging for typing. These waffles though. 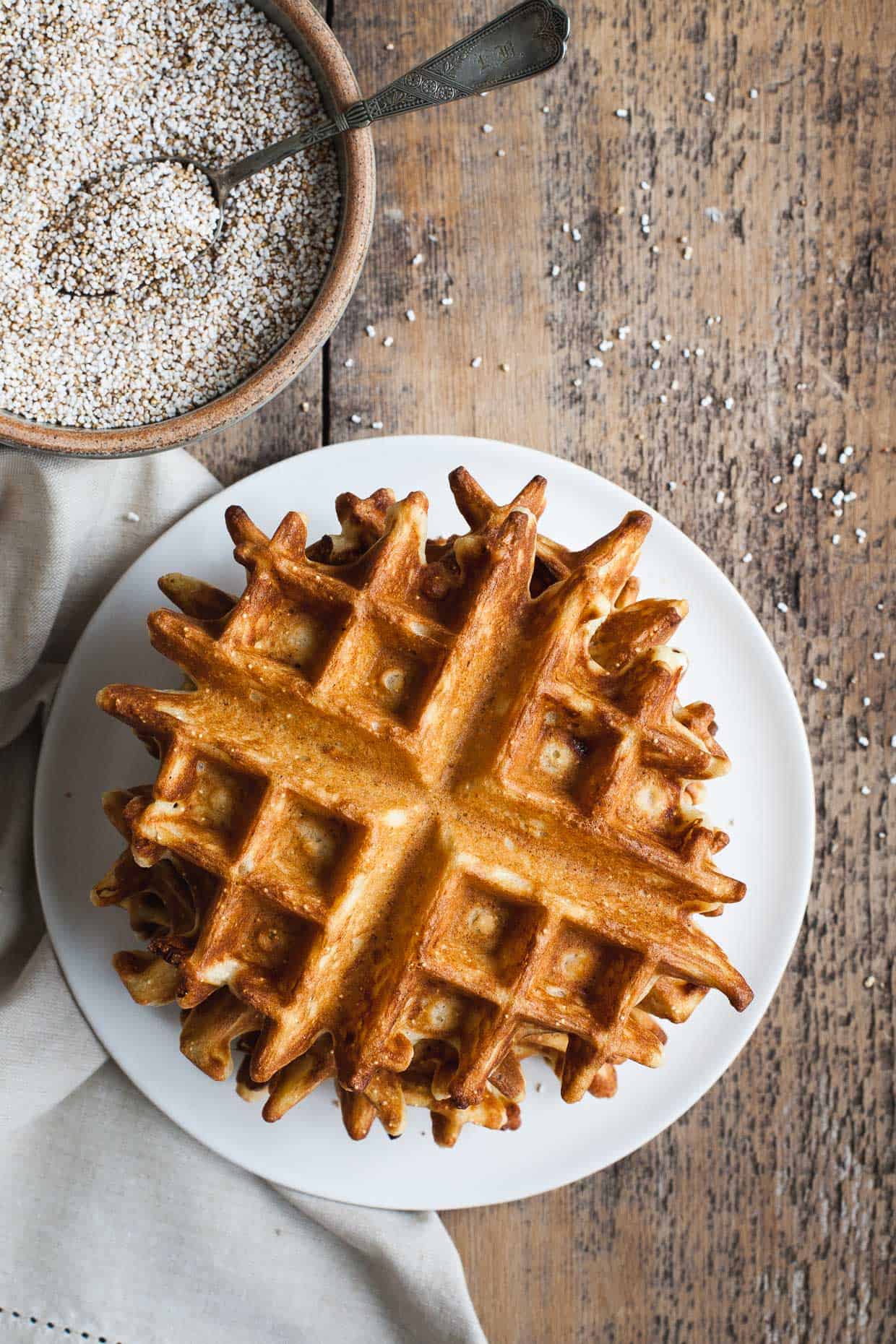 I've been hatching this savory waffle recipe ever since this epic waffle from Birchwood Cafe on our trip to Minneapolis earlier this summer. That gluten-free waffle was made of quinoa with each quarter donning distinct toppings: runny egg, chive butter with greens, bacon with syrup, and a sweet chutney with powdered sugar.

While quinoa tried to lure me in, Alanna's new cookbook Alternative Baker told me that amaranth is more exciting and complex. Move over, quinoa, there's a slimmer sexier whole grain in town. 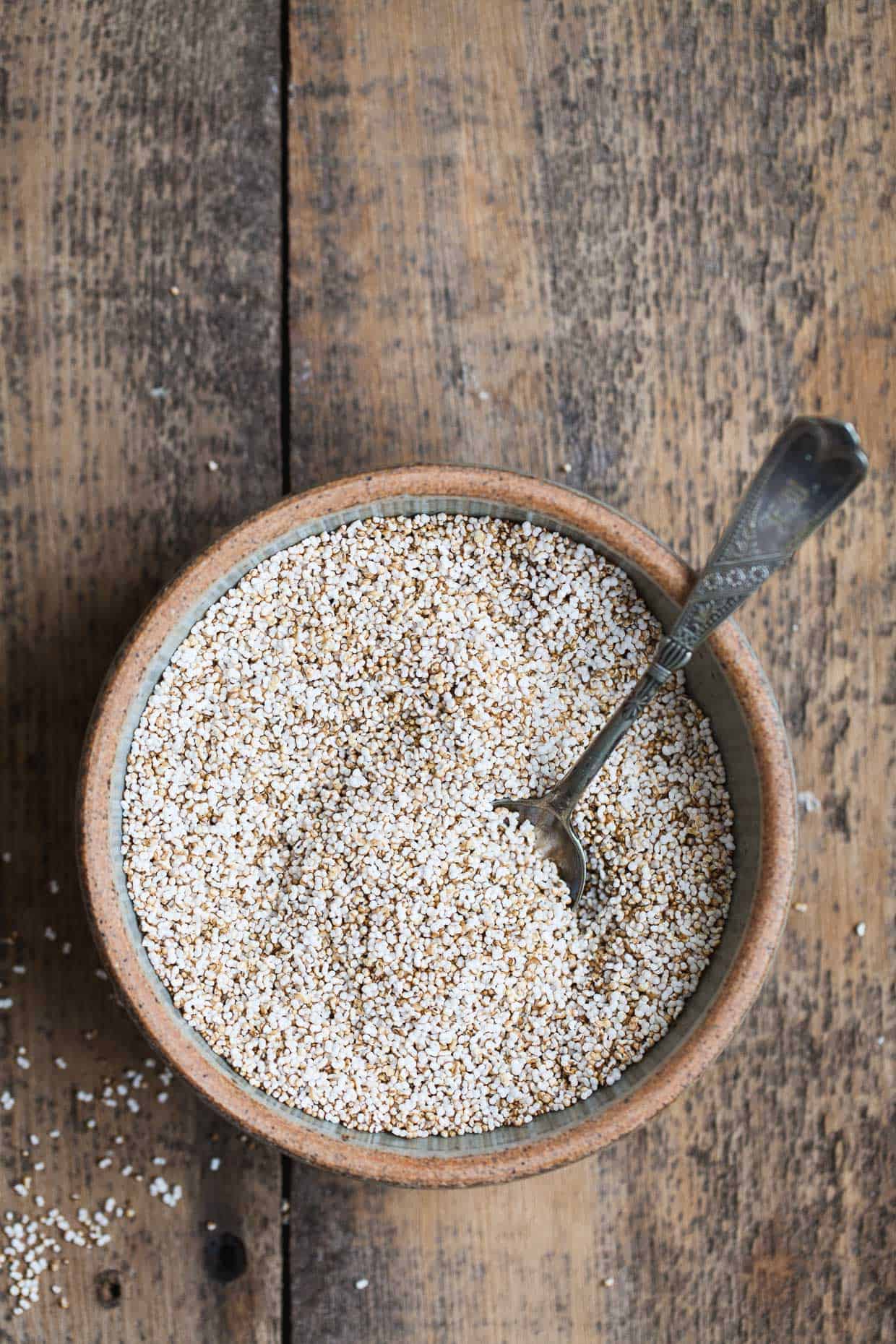 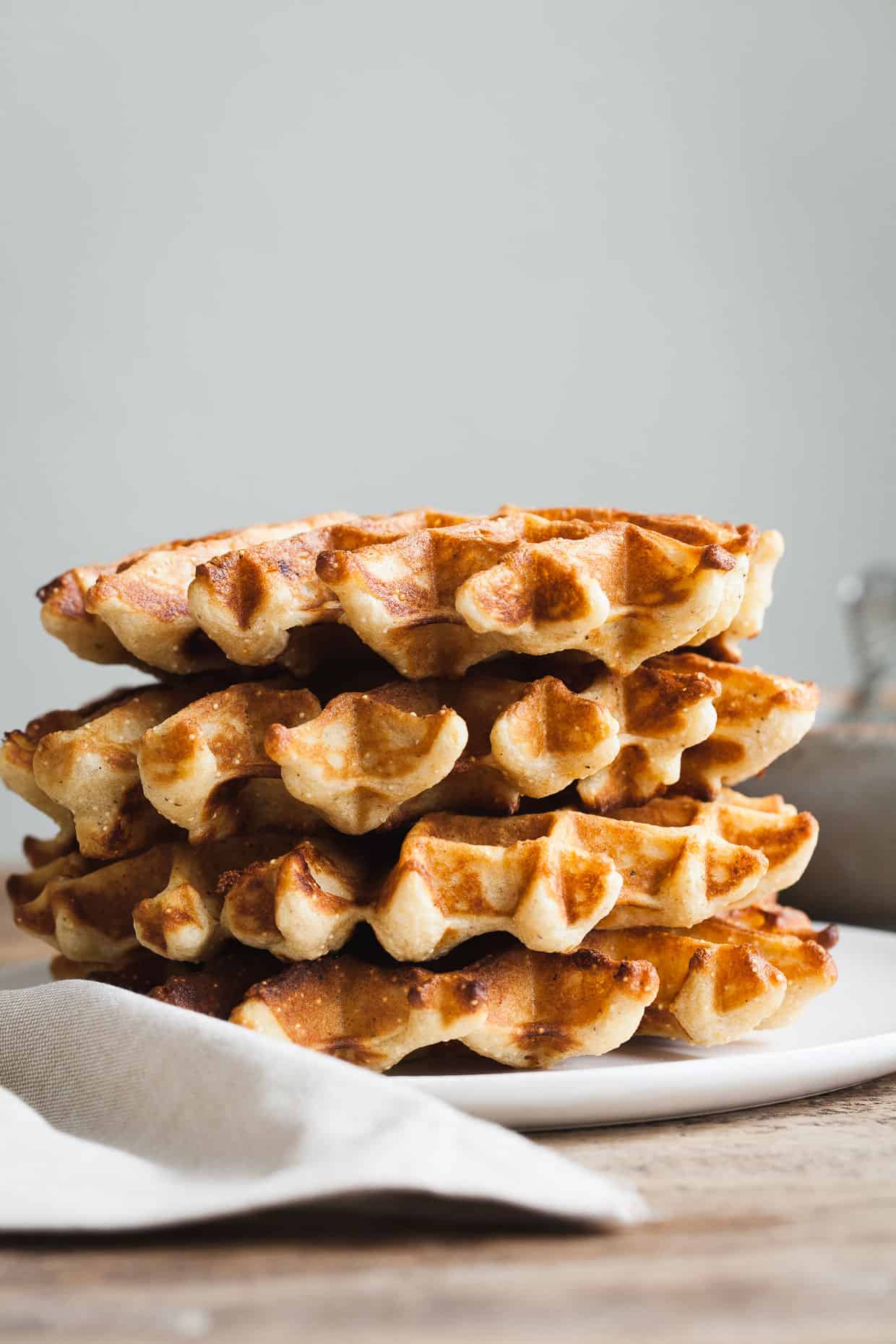 This itty-bitty ancient grain is a powerhouse for nutrition. It contains complete protein - more than almost any other grain - and is high in fiber and iron. Like quinoa, amaranth is praised as a superfood. These waffles are a nutritional beast!

Amaranth flour adds an earthy nutty flavor that pairs perfectly with this savory waffle rendition. The waffles are crispy on the outside, fluffy inside, and have whole grain amaranth and crumbled feta folded into the batter to add surprising crunchy bits and pockets of creamy tang! 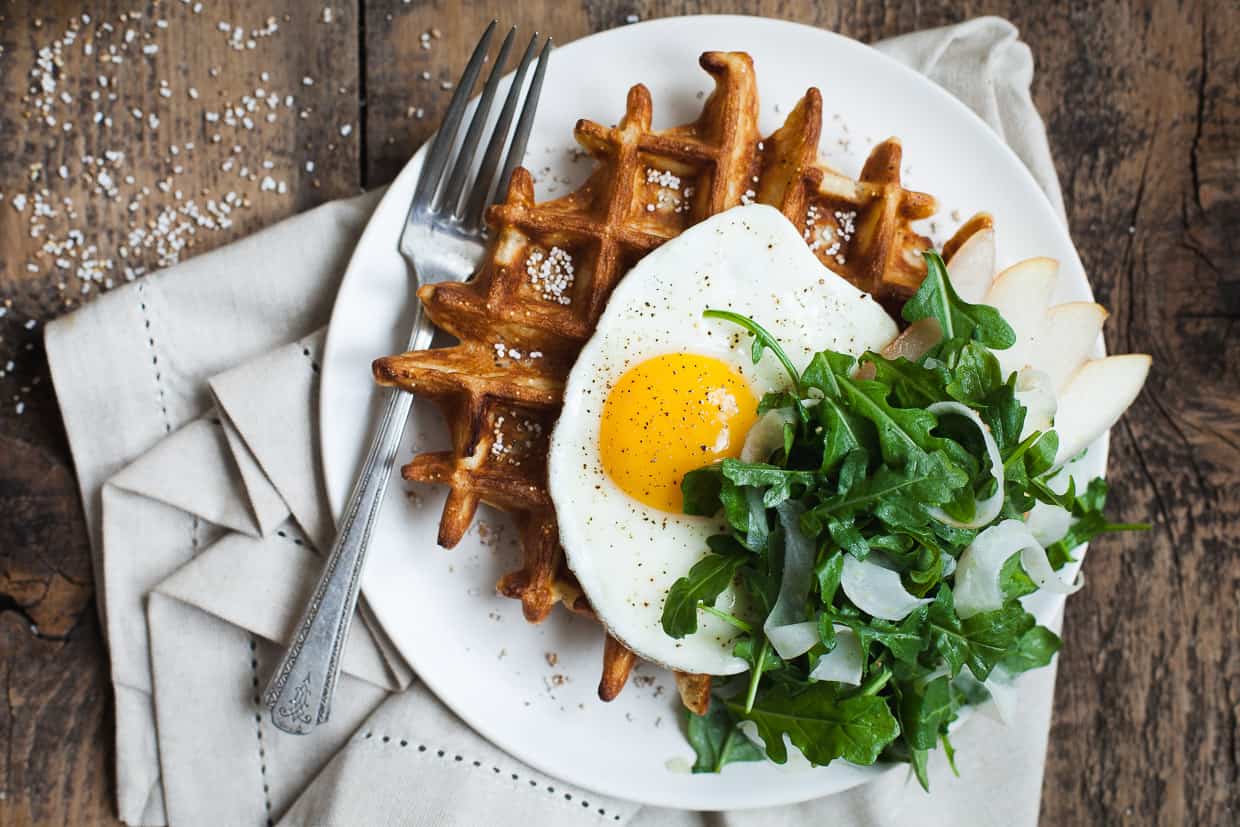 In the spirit of Birchwood's around the world waffle toppings, I'm going to share these amaranth waffles two ways: one savory and one sweet. First up is this savory version with a sunny-side up egg, popped amaranth for crunch (and because it's so darn cute), and a big handful of pear, arugula, & fennel salad. Stay tuned for its sweet counterpart next week!

Back to my finger for a second. My career as a hand model ended abruptly mid video shoot today with just the slip of a finger off the sponge. So Alanna put on my clothes and stood in as my body double. That's true friendship right there. (She also squeamishly handed me the bandages while covering her eyes). Don't worry though, these savory waffles are good enough to make me forget about the pain.

What kind of waffler are you? Are you more of a sweet or savory waffle kind of person? I love both, but I reserve the sweet ones for dessert only. And, truth be told, we ate these savory ones for dinner both times I've made them. So I guess that means I don't eat waffles for breakfast...

Fried Eggs (Method from How Sweet It Is - hint: she's got pictures) 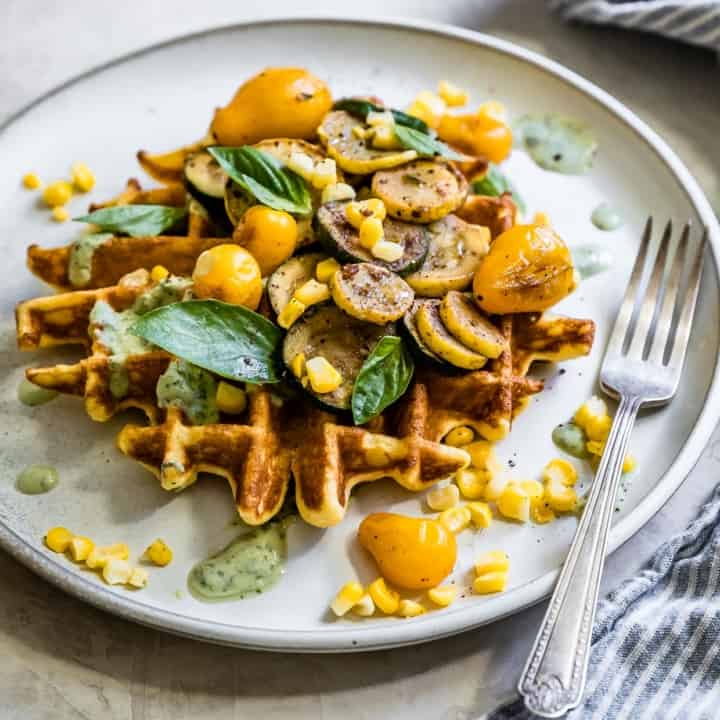 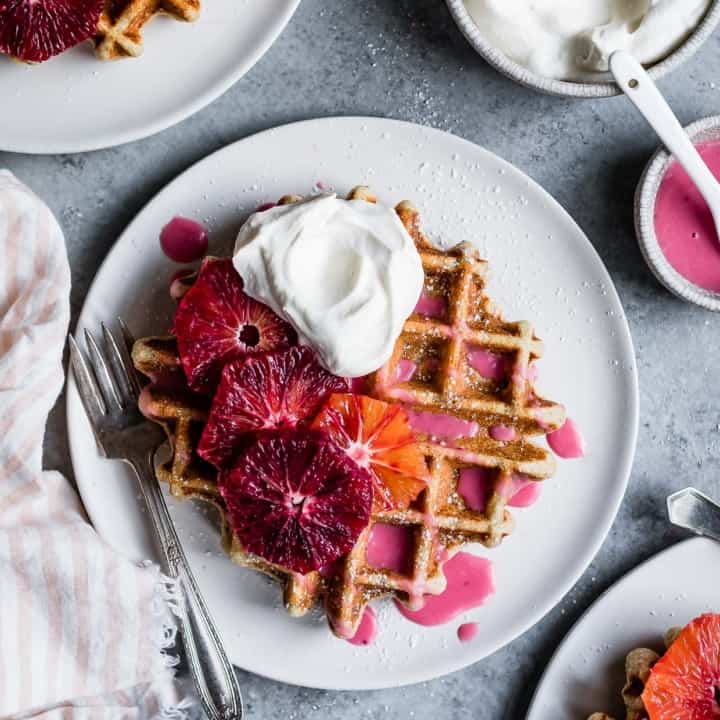 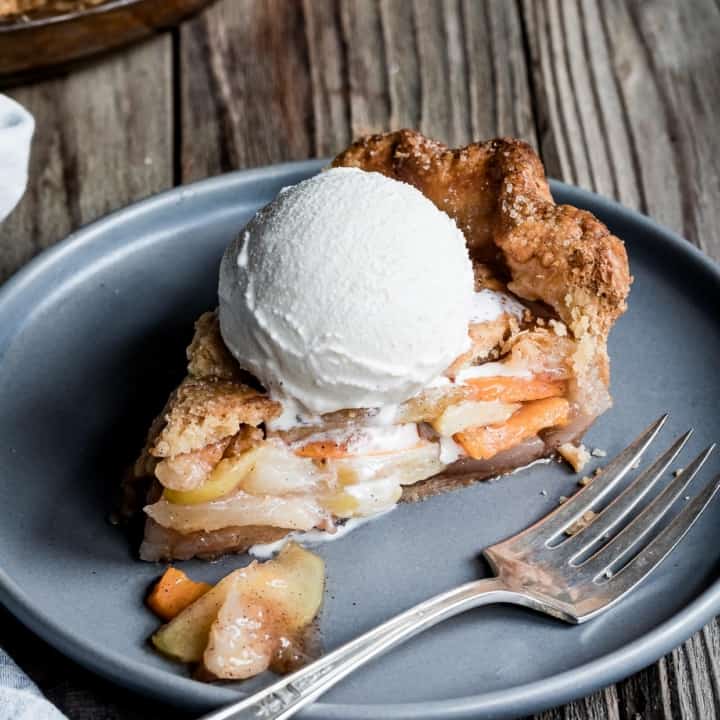