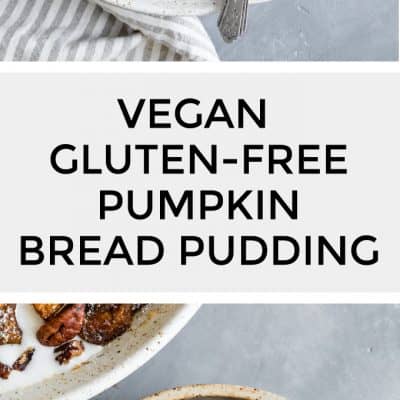 This fall-inspired pumpkin bread pudding is vegan and gluten-free! With a pumpkin coconut pudding base, this vegan bread pudding can be made ahead so all you have to do is pop it in the oven before your holiday brunch! Serve topped with whipped coconut cream or ice cream. 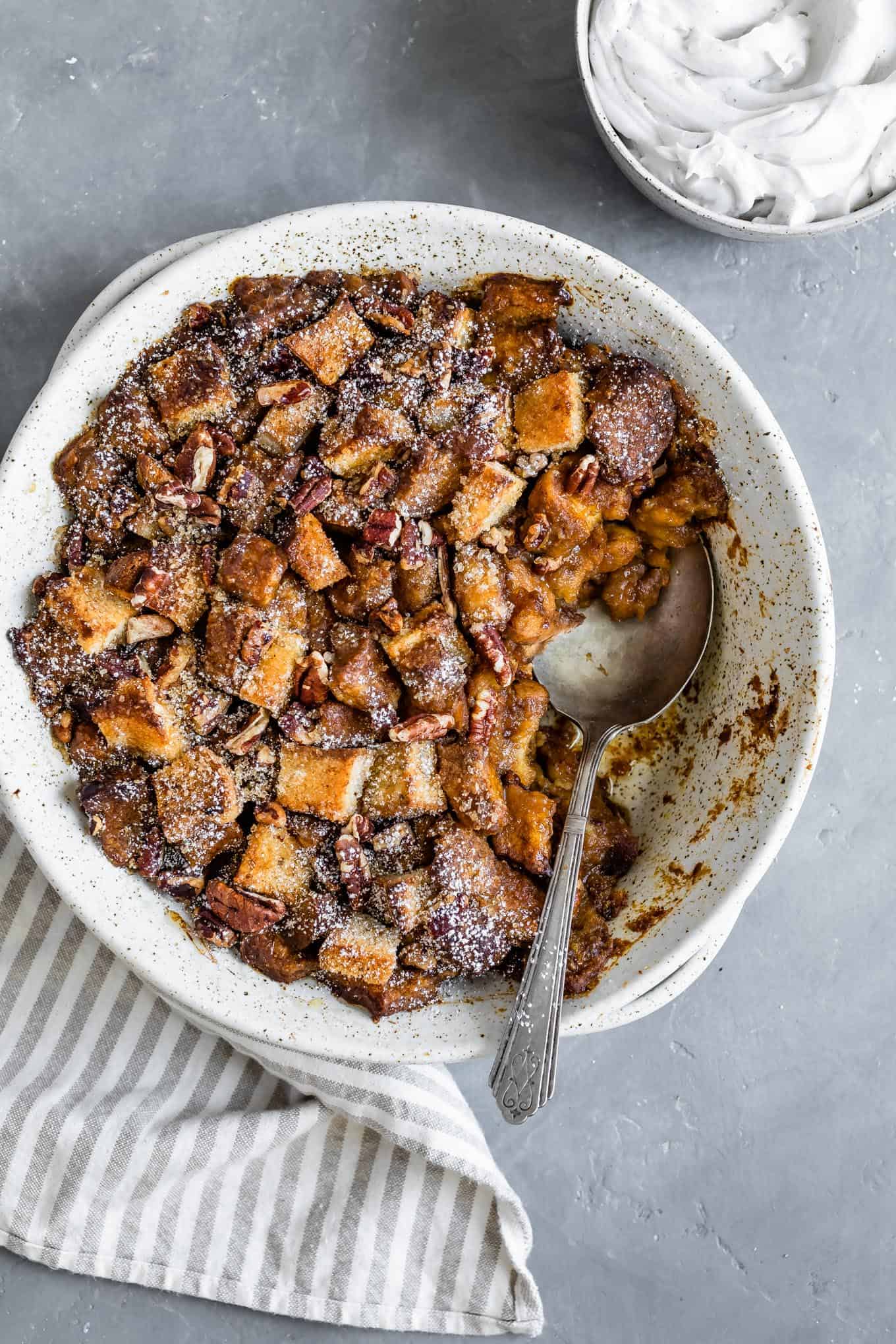 Now that it's October, I'm finally ready to embrace pumpkin in all it's cinnamon-spiced glory. We're in full fall mode over here with sweater weather (for now), halloween costume planning, and pumpkin everything.

We're still ironing out the homemade costume details, but Zoella's current costume ideas include: 1. A (pink) UPS "package truck" because she "loves packages and can give packages to people."  2. A pink seashell with a pearl, or 3. A mermaid princess, BUT Ira can't be a crab because "I don't want him to pinch me." I'm very eager to see how this plays out.

Almost as eager as I am to share this super easy gluten-free vegan pumpkin bread pudding. With creamy fall spiced pudding and crispy edged bread, this warm and cozy treat is like pumpkin pie filling meets french toast. Serve it as a make ahead brunch dish or dessert for holiday entertaining. A dusting of powdered sugar dresses it up for any occasion. 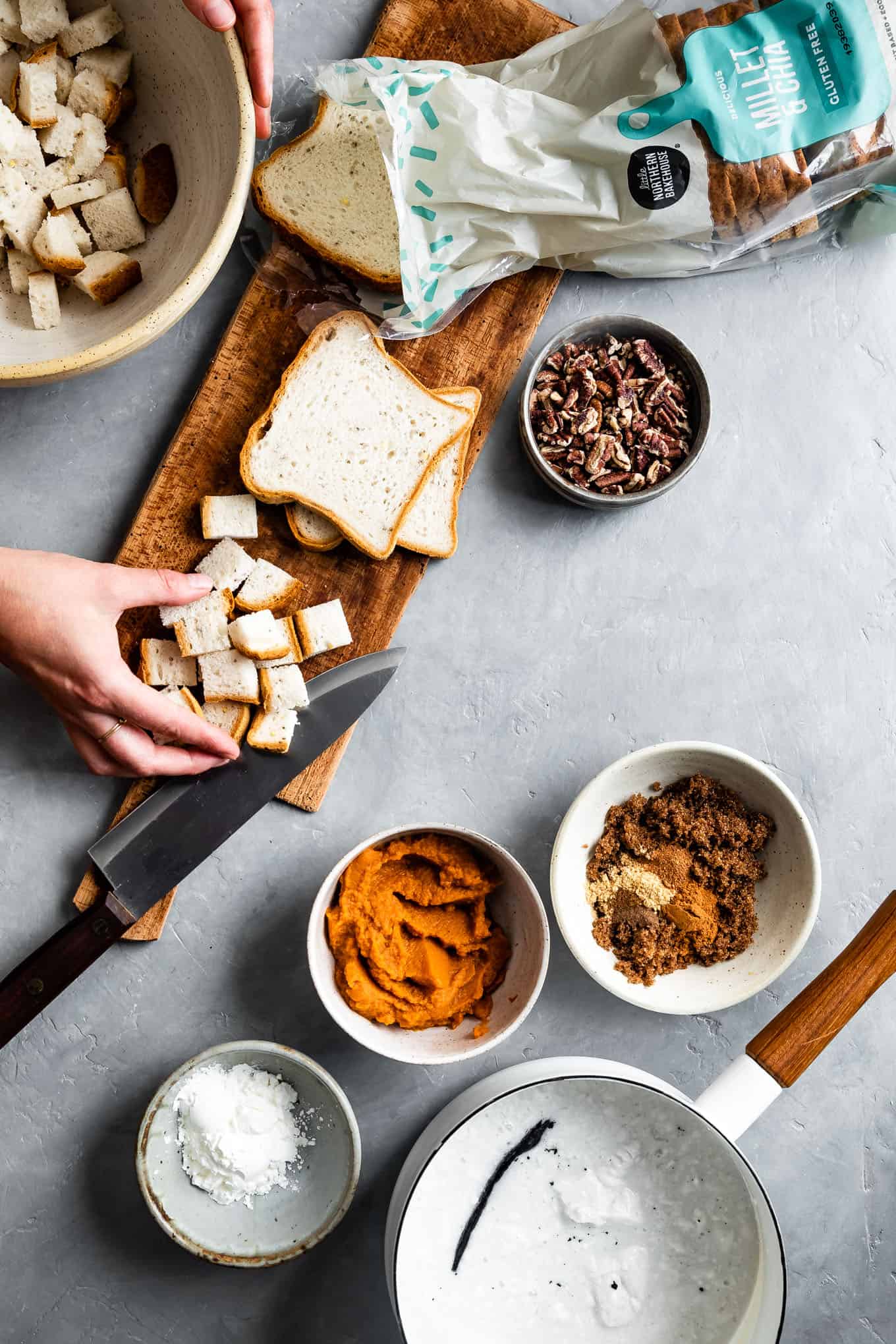 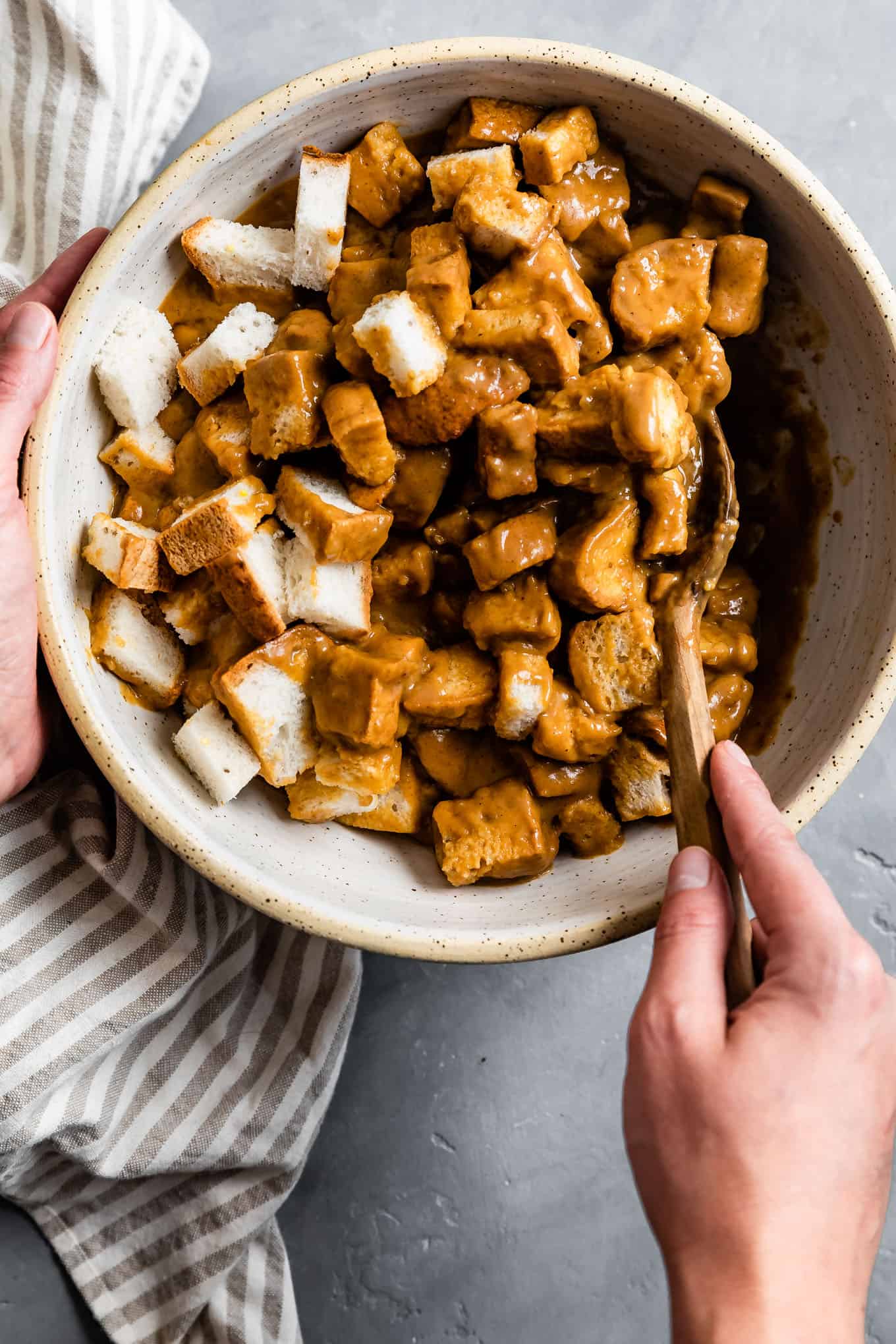 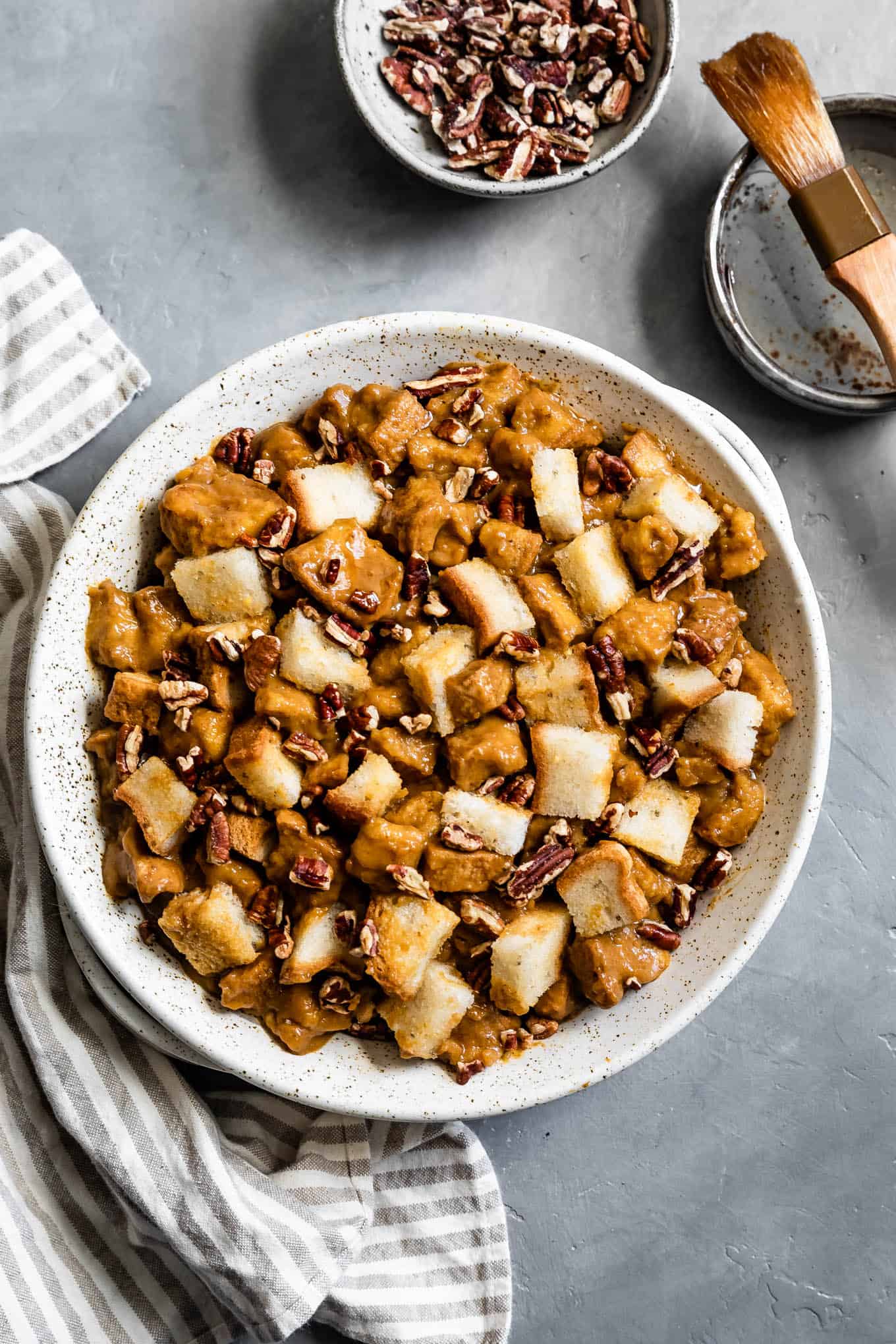 How to make gluten-free bread pudding?

With a full suite of delicious gluten-free loaves from Little Northern Bakehouse, gluten-free bread pudding couldn't be any easier to make.

Start with your favorite loaf of their gluten-free sliced bread - I recommend their millet & chia bread, which is plant-based and nutrient rich, with hearty enough texture to stand up to a thick pudding custard coat. This texture is important for bread pudding - if you use a flimsy bread without much structure, it will just disintegrate into the pudding.

HERE'S THE KEY: let the cubed bread sit in the pudding at room temperature for awhile before baking. This will give the bread time to thoroughly soak up the pudding. I recommend giving it at least a 45 minute rest, especially for a hearty gluten-free sliced bread, but you could also keep it overnight in the fridge if you want to make it ahead. By soaking up the pudding, you'll have a perfectly gooey bread pudding. 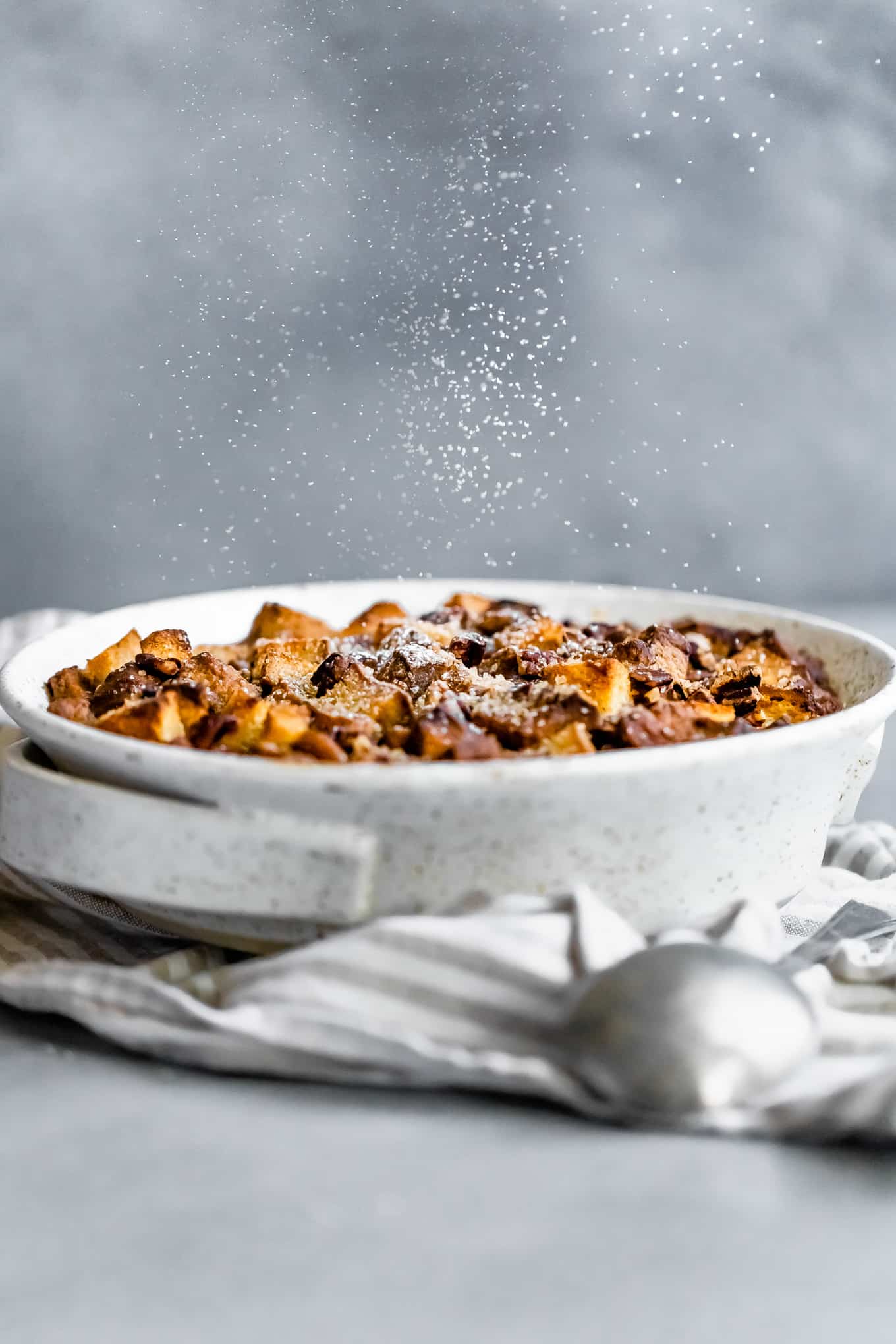 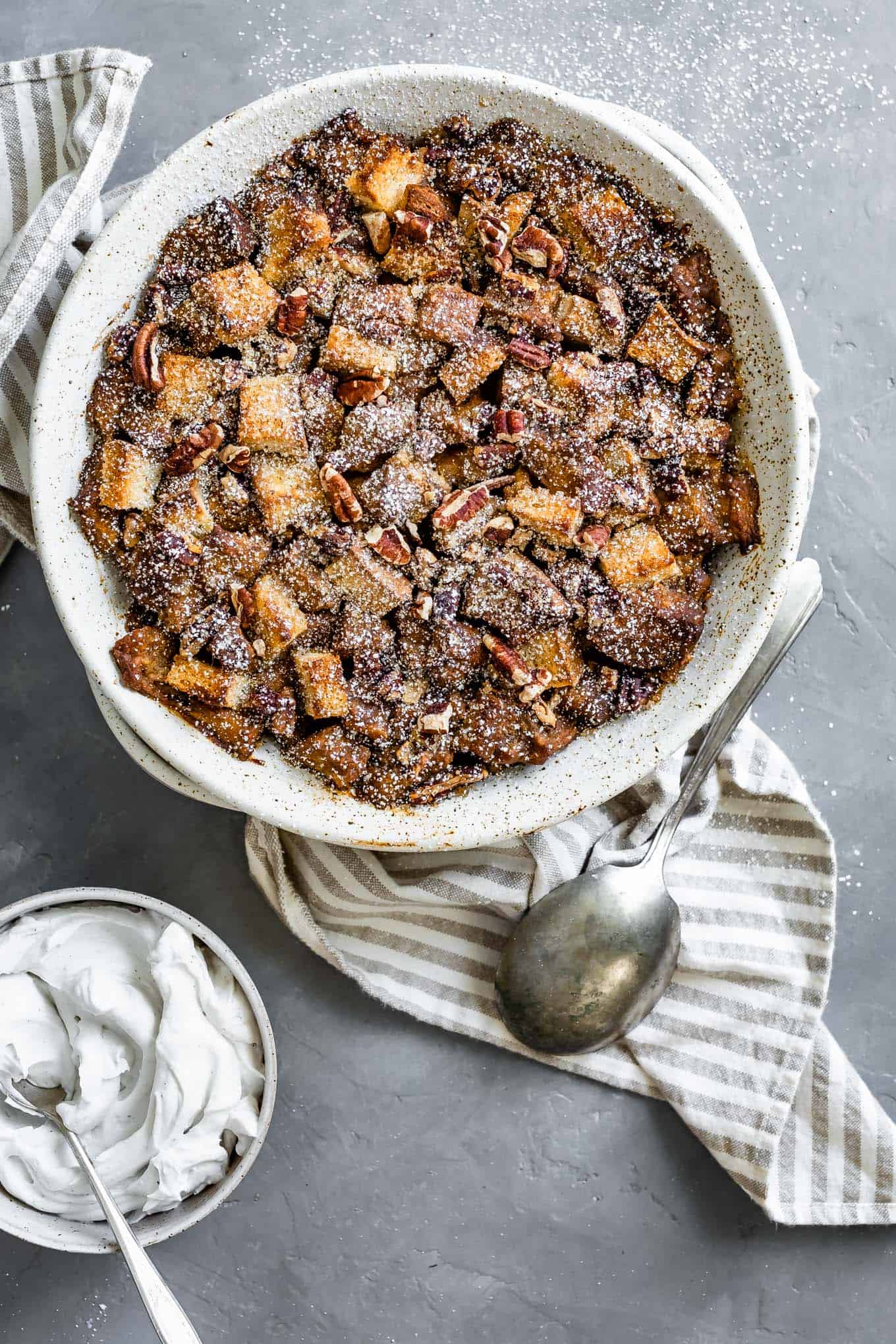 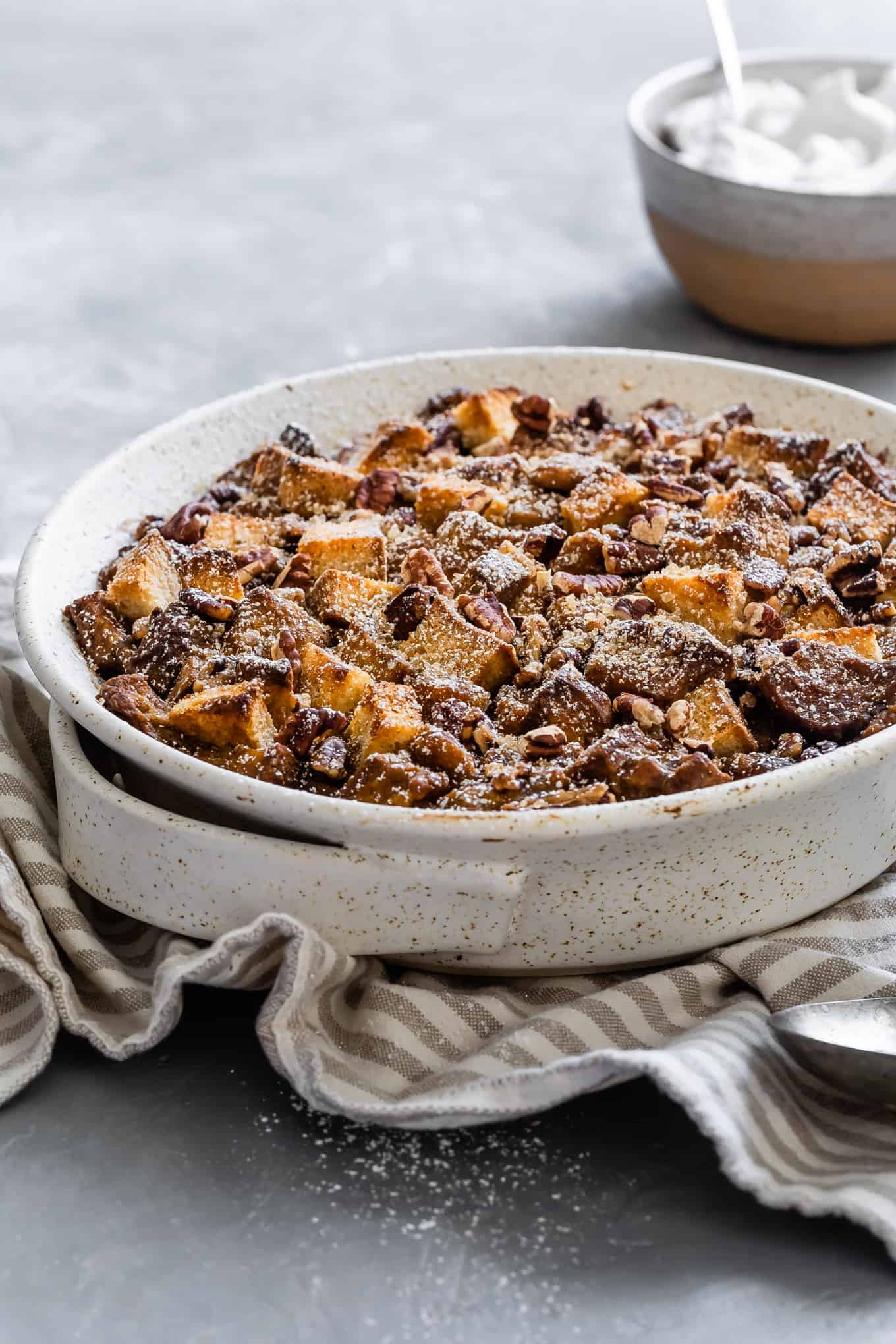 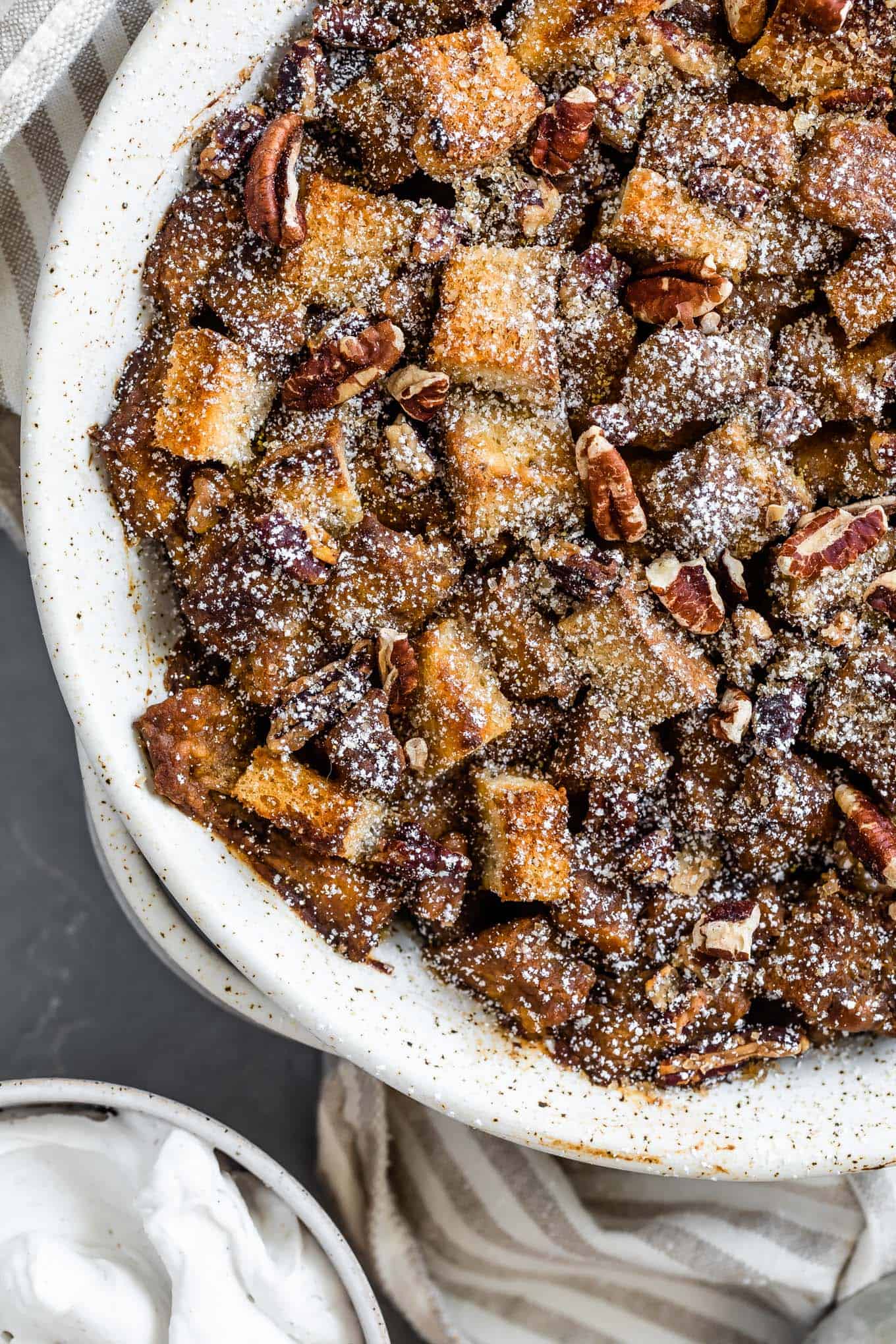 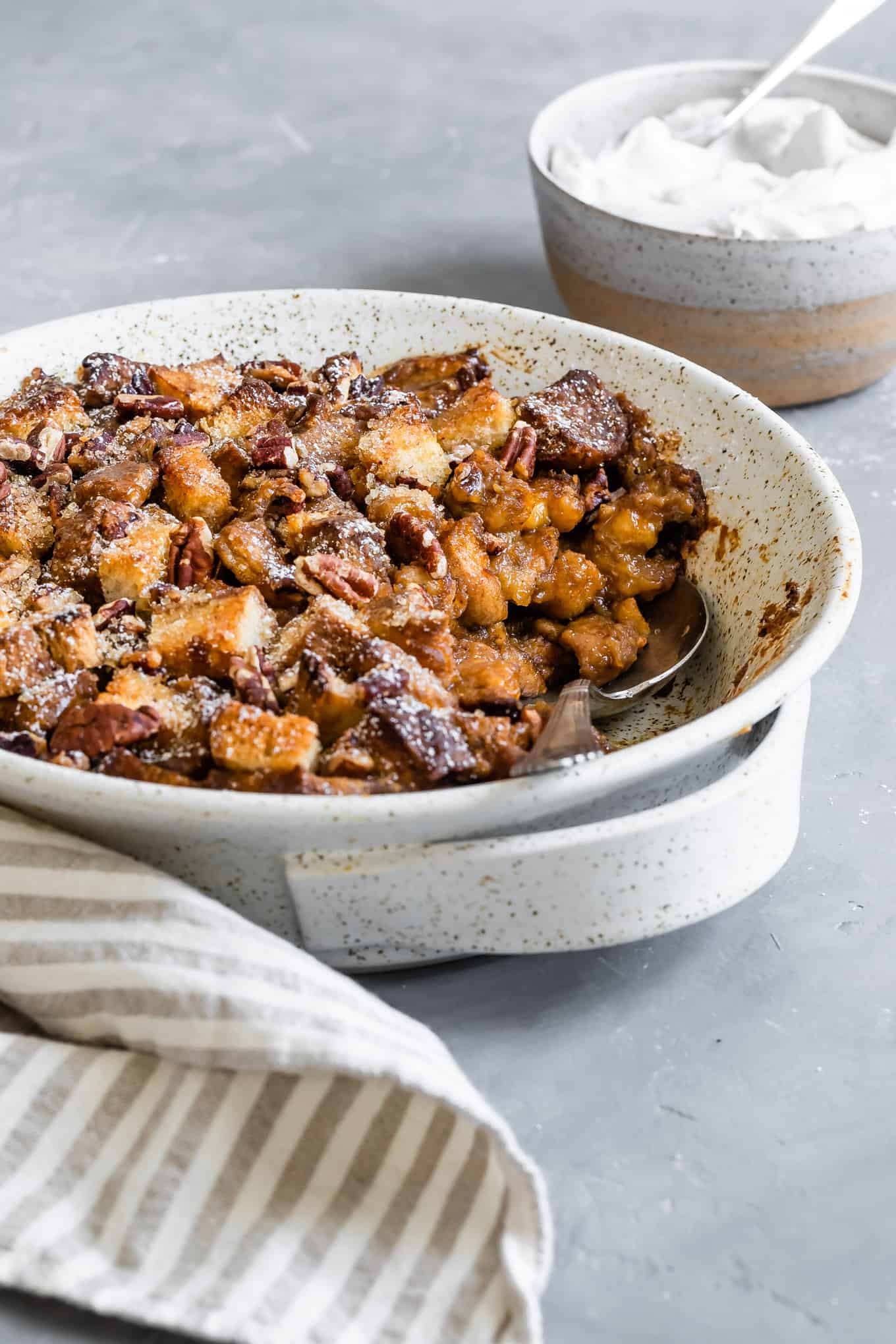 How to set coconut bread pudding?

Instead, remove the pudding from the stove, quickly whisk in a small amount of corn starch slurry until just combined, and immediately toss the pudding into the bread before the pudding has a chance to thicken up. The heat from baking will set the bread pudding so it's equal parts creamy with structure.

Here I've added pumpkin and spices to the pudding. With these robust flavors, the pumpkin spices and bread flavors shine, while the coconut notes hide in the background. Shockingly this pumpkin coconut bread pudding doesn't taste overwhelmingly like coconut. 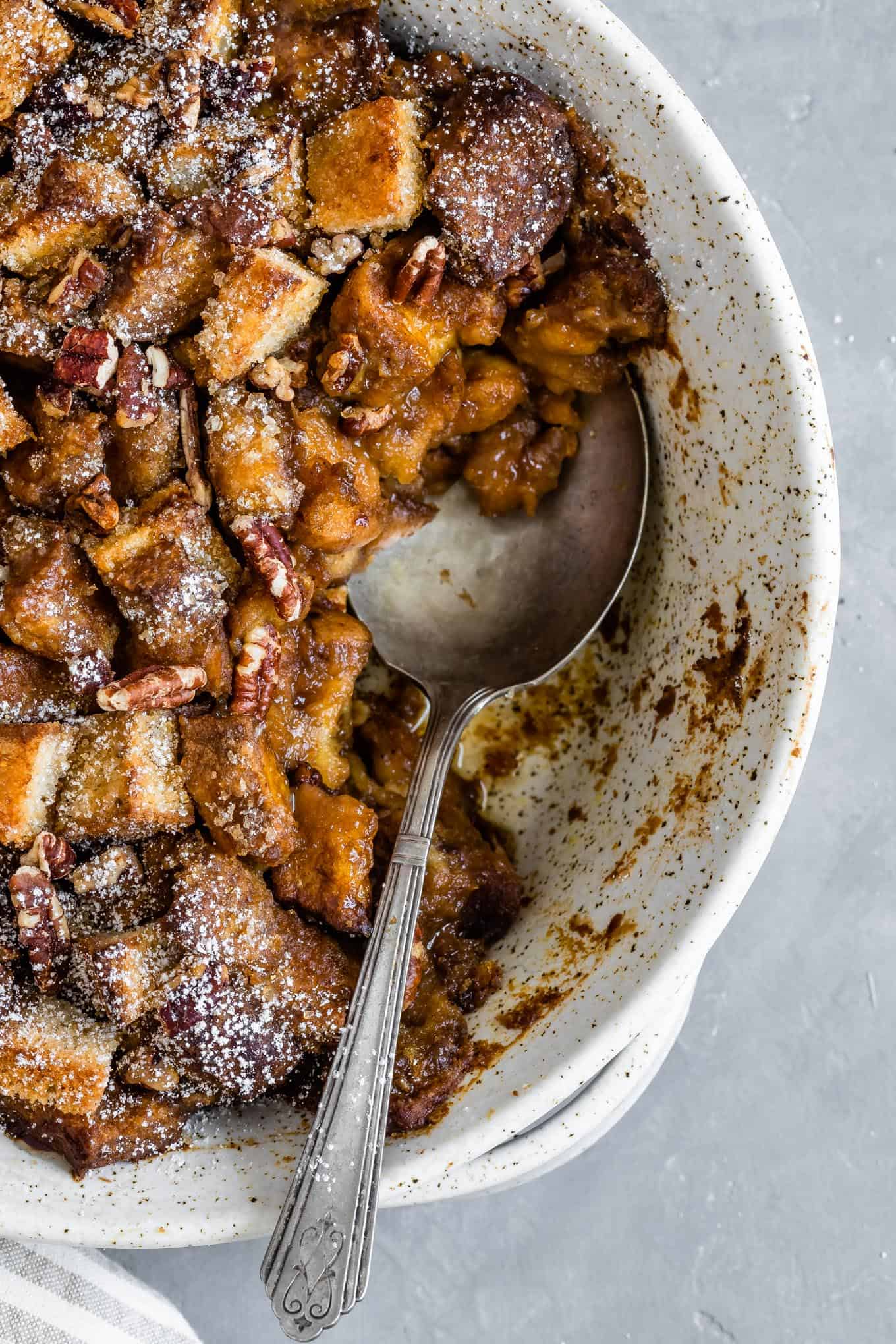 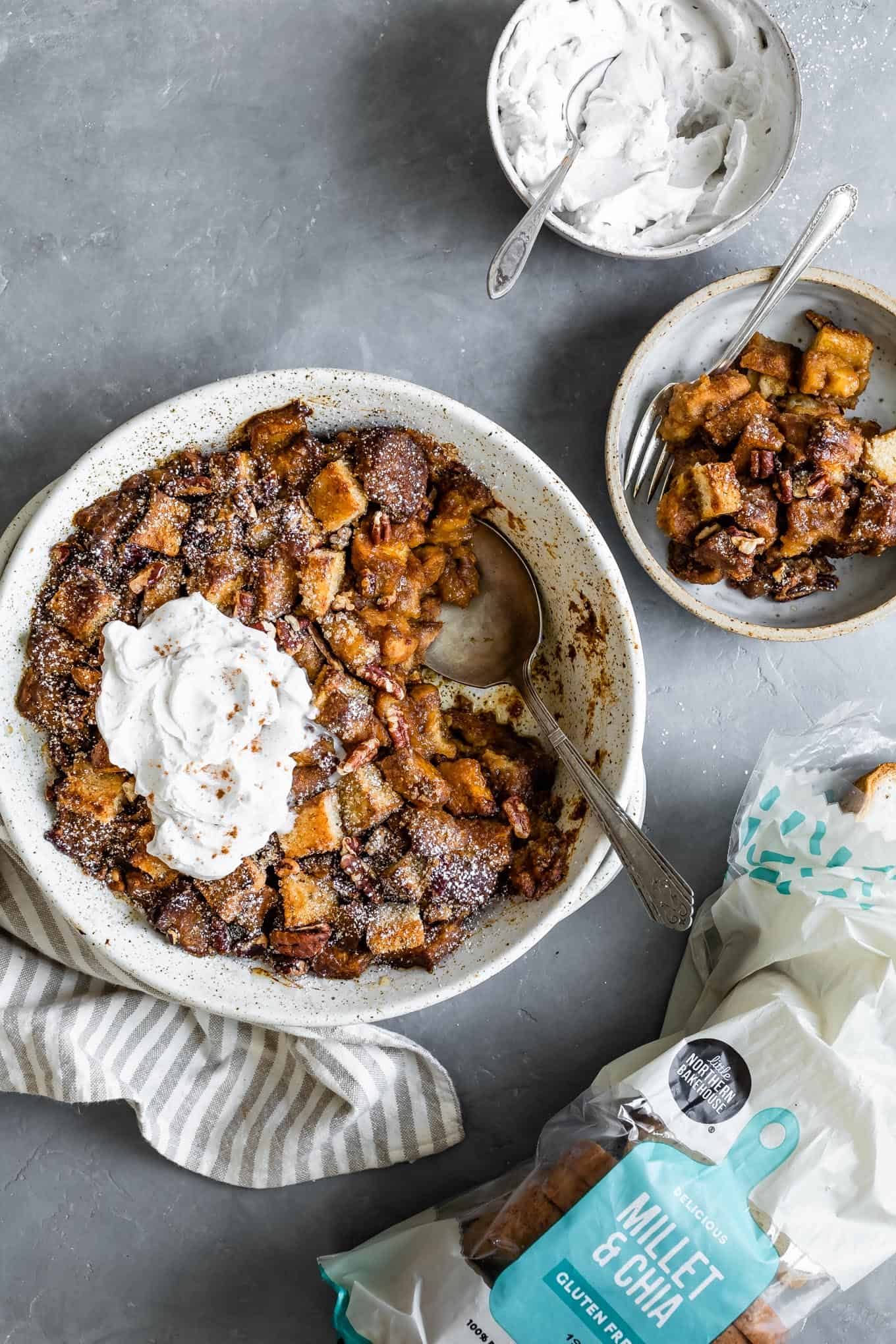 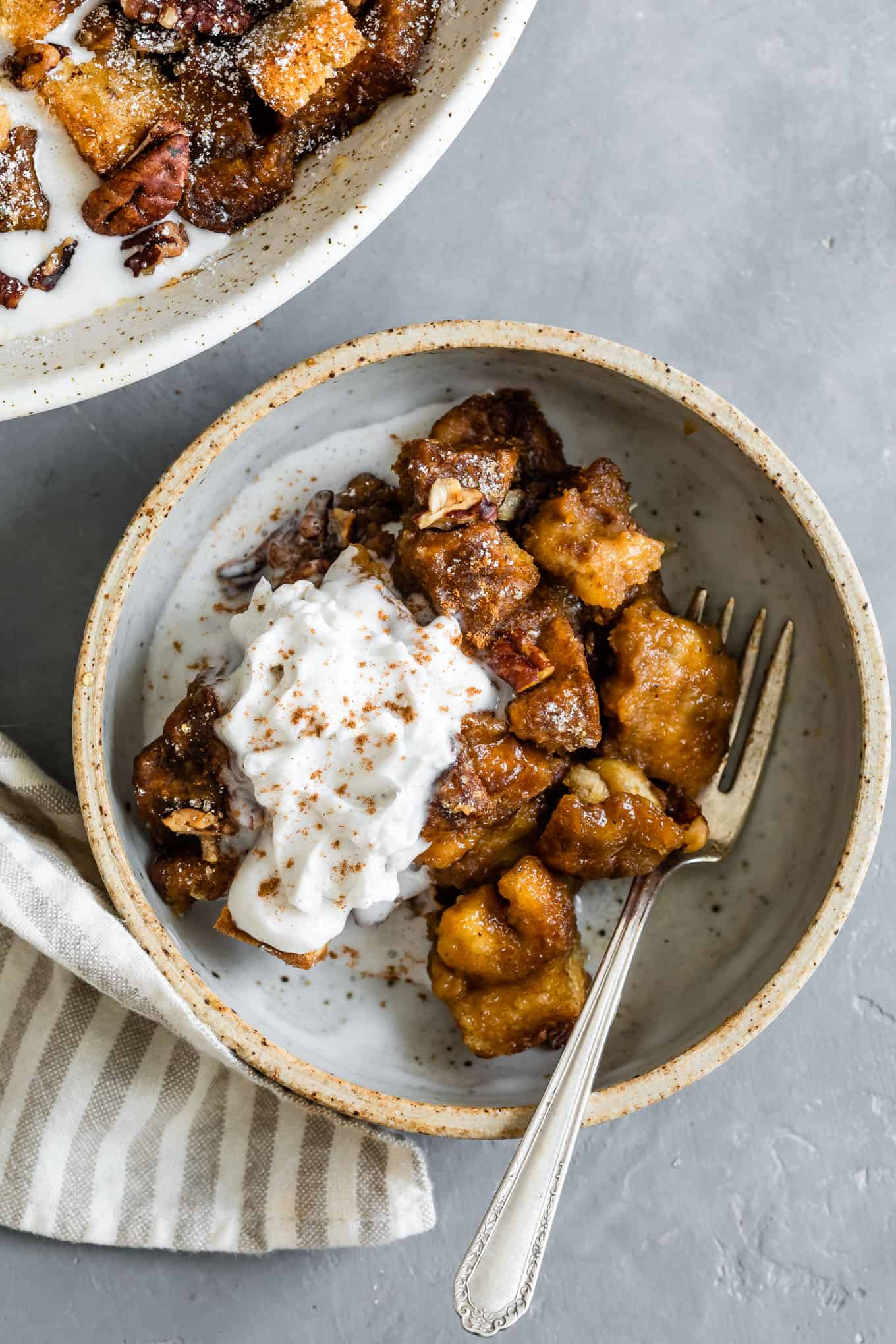 If you're like me, assemble the entire thing the night before and bake it the next morning just in time to serve it up as the sweet treat on your holiday brunch table! 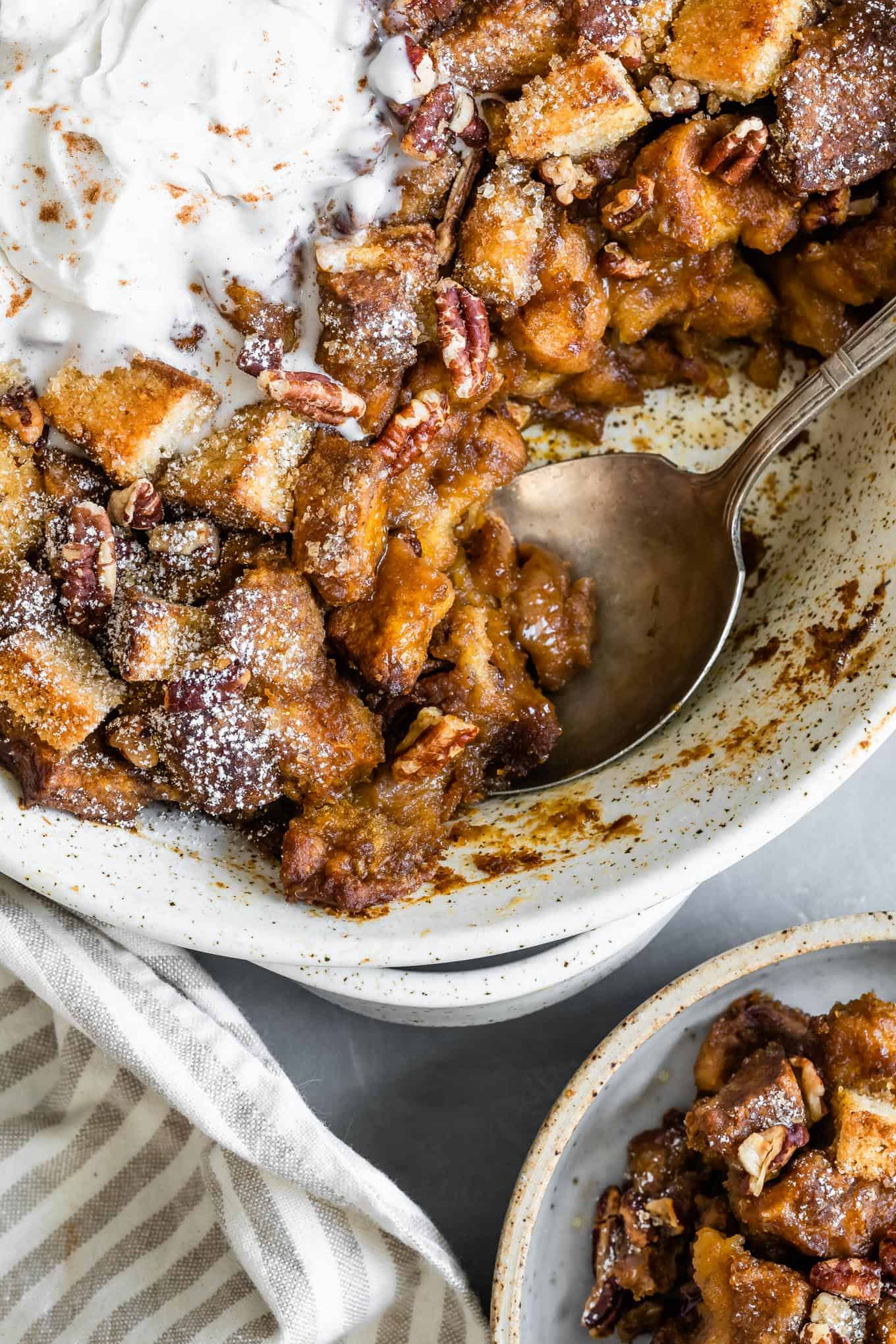 I do not recommend using the coconut cream or milk from Trader Joe's as they seem to have updated their supplier and the new consistency is a bit oily.