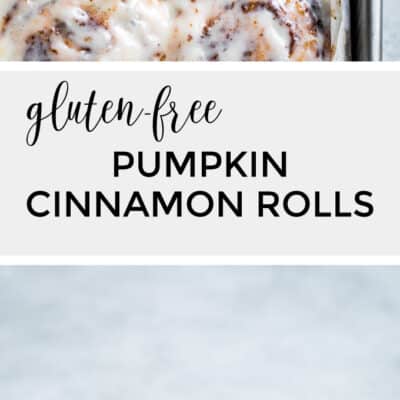 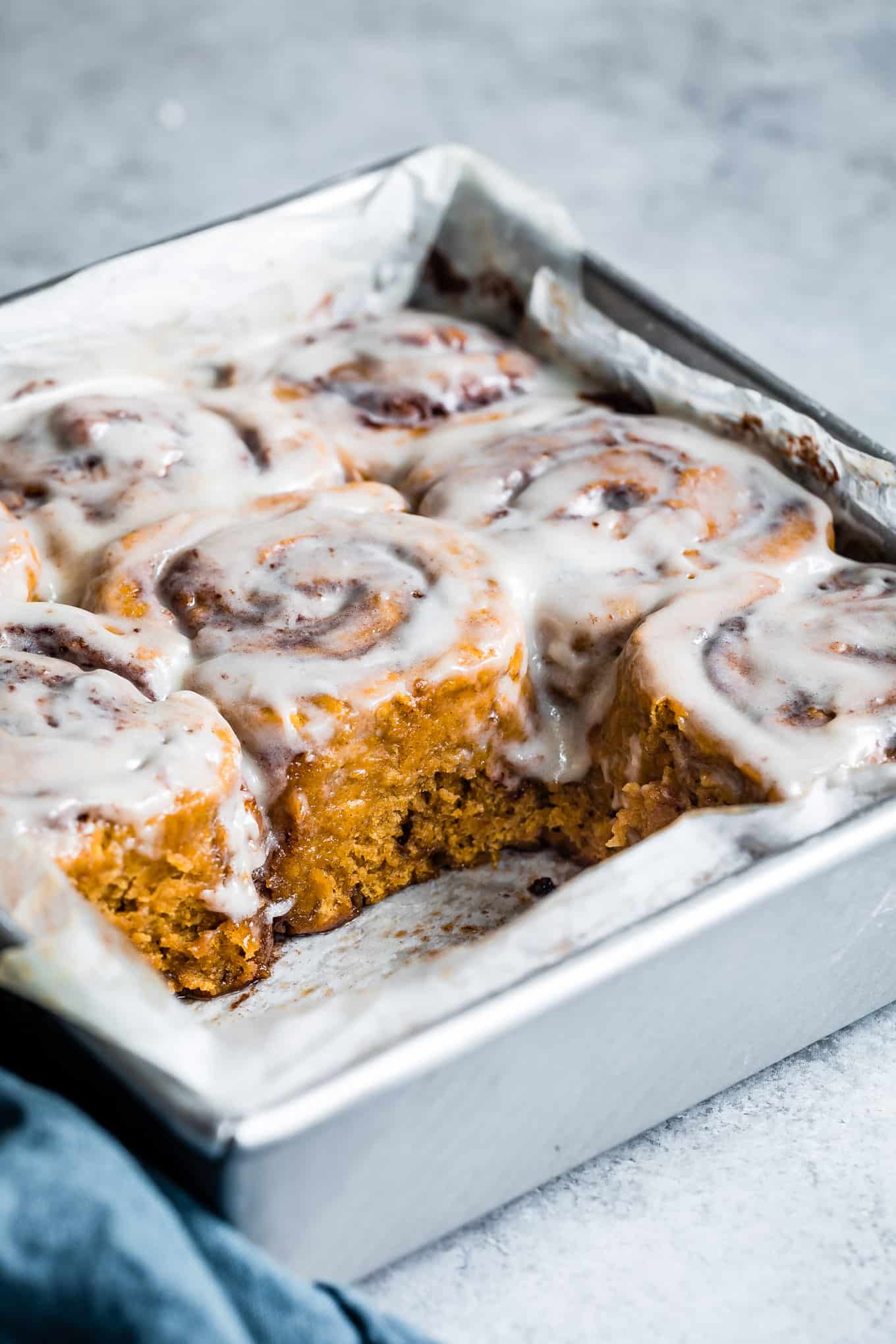 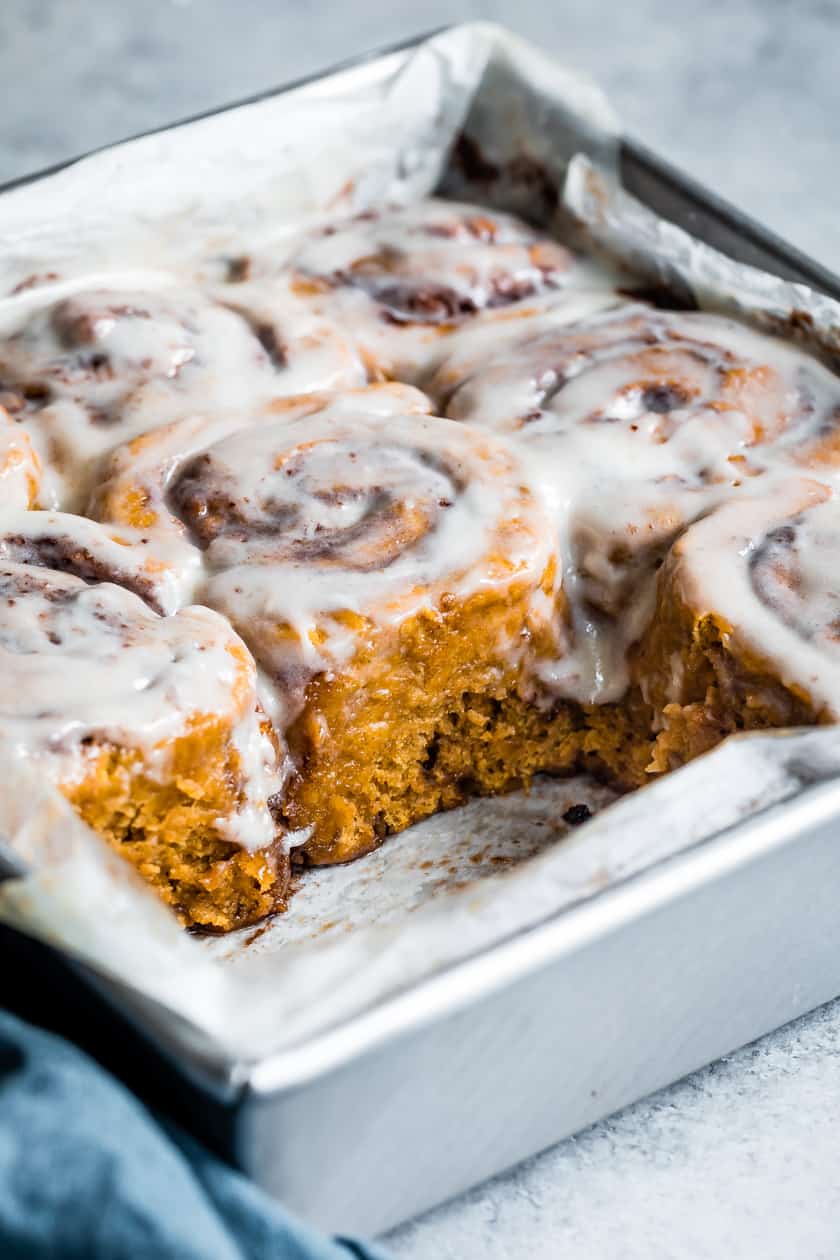 And I undoubtedly ate way too many cinnamon rolls myself in the span of three days. All in the name of "perfecting the recipe." I regret nothing, except not having a bag of potato chips on standby after batch five.

This morning I swore I wasn't going to eat another pumpkin cinnamon roll. But then I had to taste one to make sure they were still delicious as leftovers with a little reheat (they are) before I wrapped them up for Zo's daycare teacher.

I'm sure you can see where this is going. One forkful and I caved and ate the whole roll. 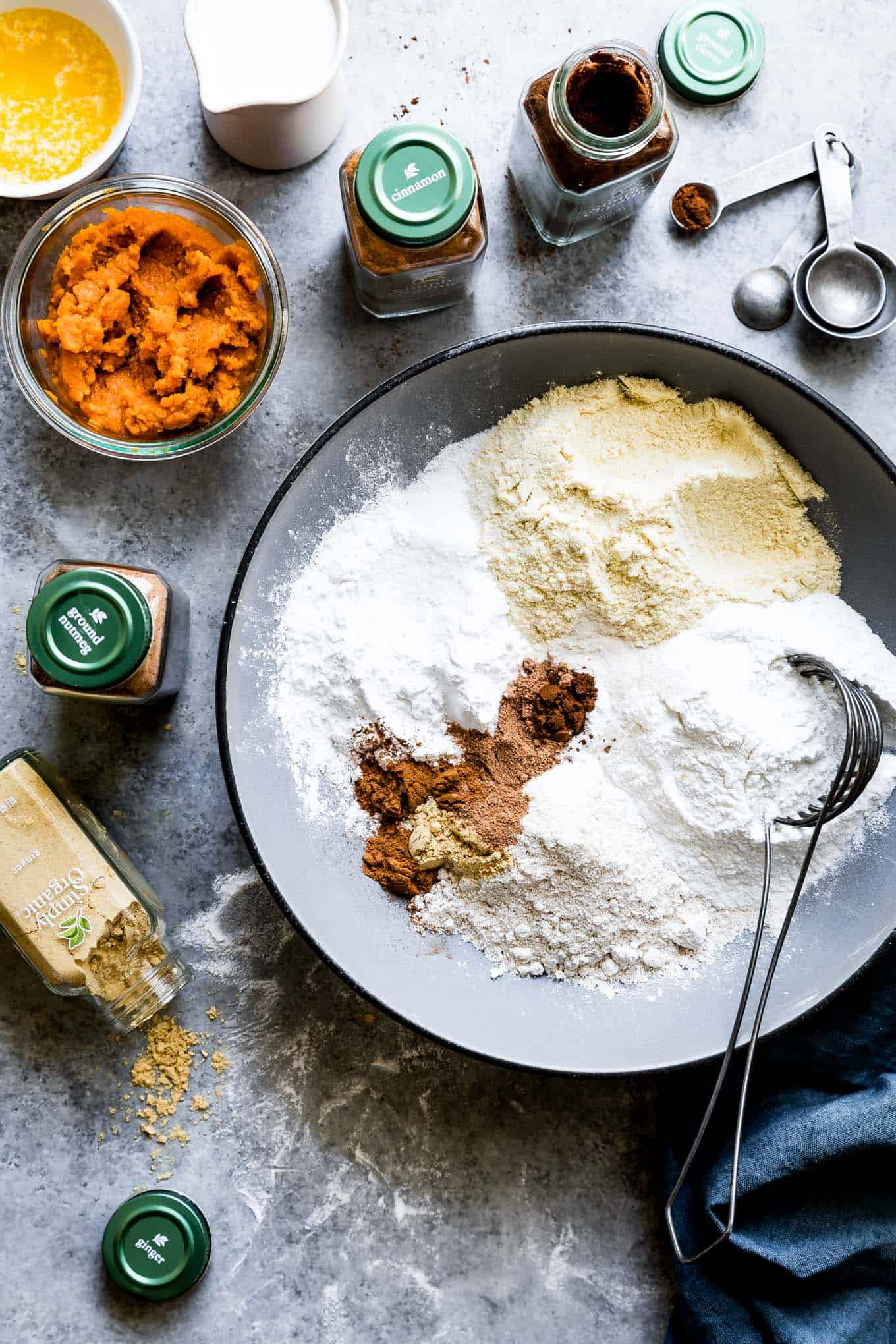 Five batches later and these, my friends, are finally perfect. They're exactly the kind of cinnamon roll I've been craving - super soft, fluffy, and moist and loaded with gooey sugar and spice layers and a healthy drizzle of icing. The crisp outside slowly softens as the glaze seeps its way into the rolls.

Made in partnership with Simply Organic and The Feed Feed, these pumpkin gluten-free cinnamon rolls are the first in a four-part series about the joy of cooking with organic herbs, spices, and extracts. Today, I'm using the nostalgic spices of fall: cinnamon, nutmeg, ginger, and cloves. 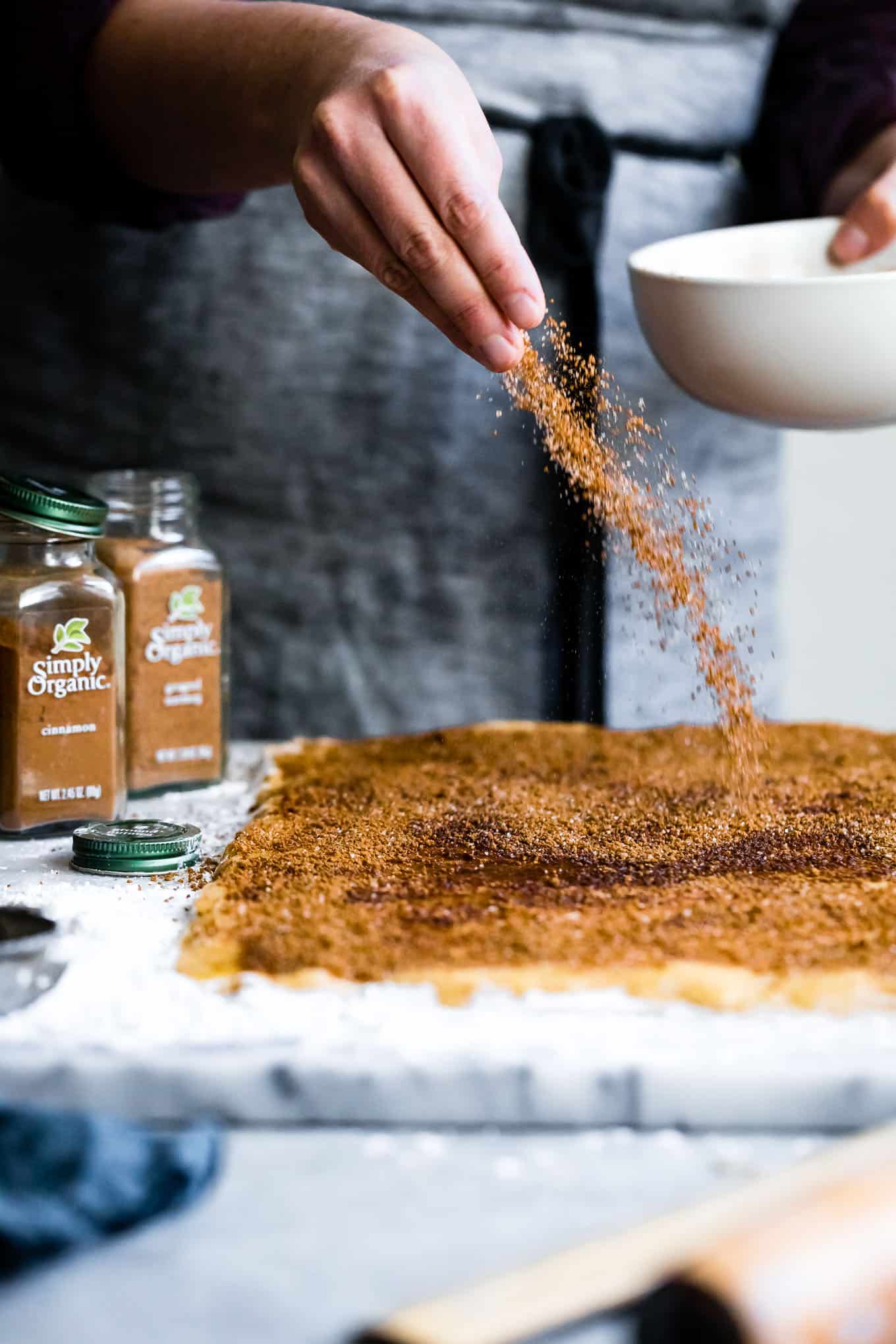 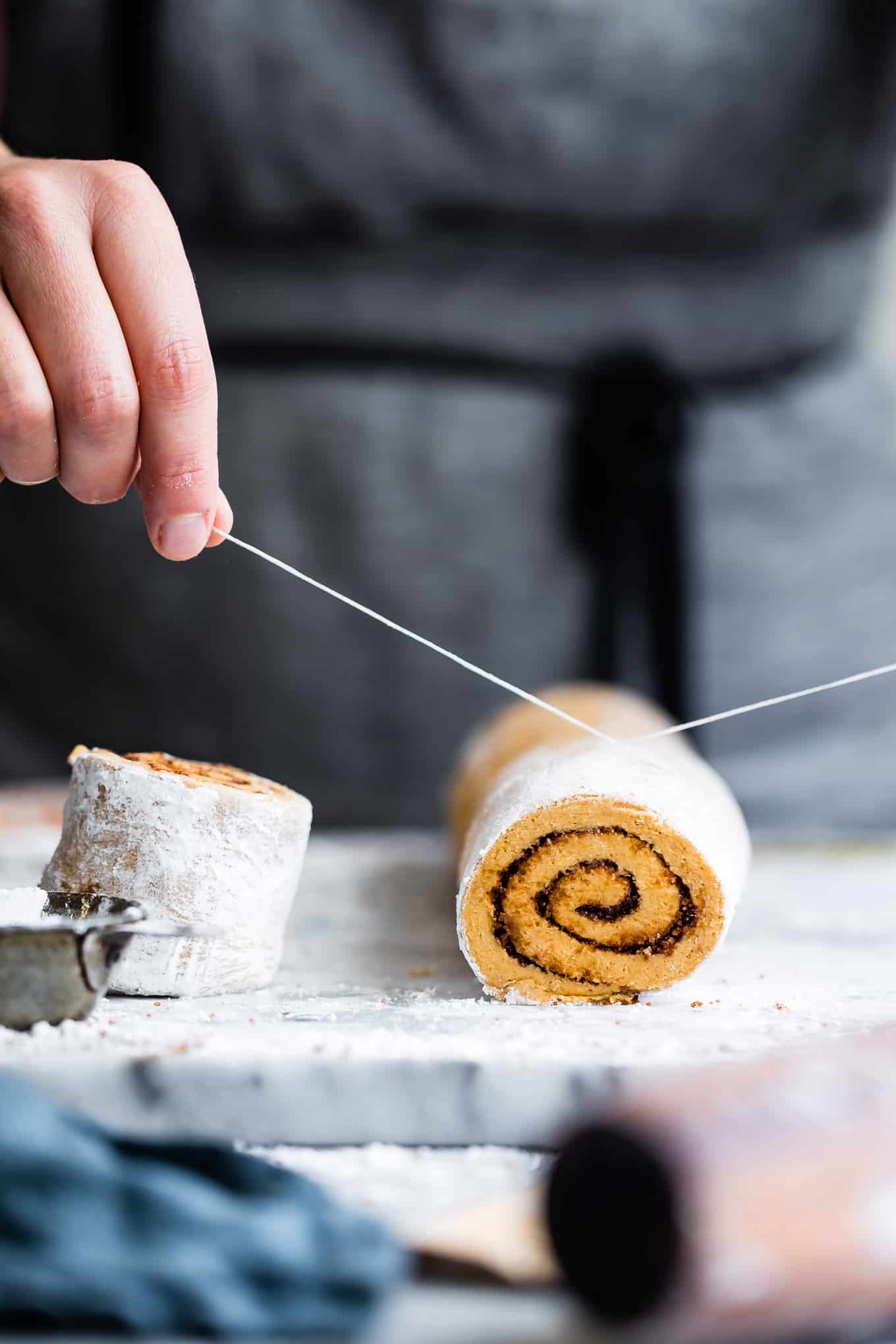 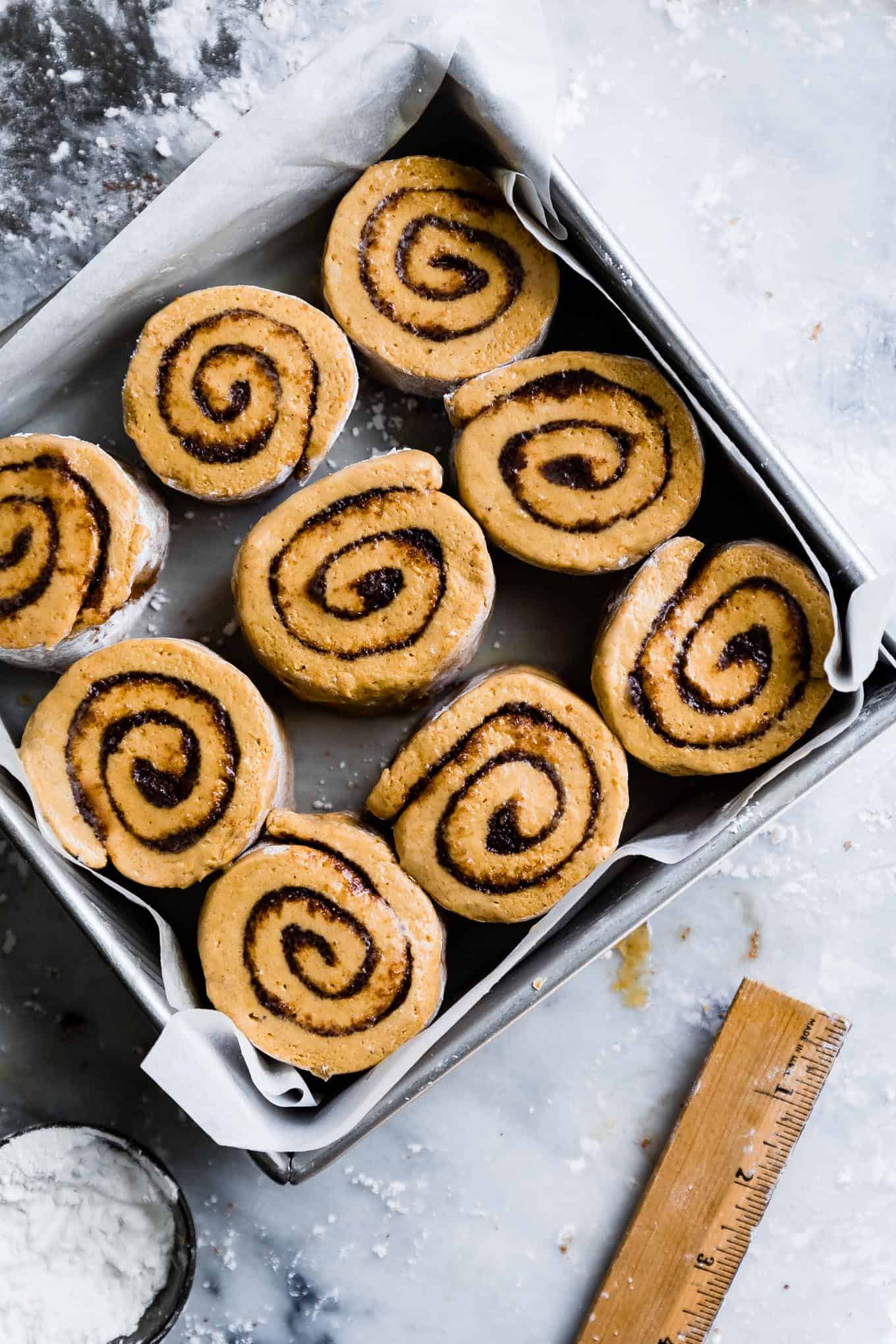 Pumpkin desserts are all the rage. Come Fall,  the world can't seem to get enough. When it comes down to it, though, it's really pumpkin spice that's got the addicting nostalgic draw. The familiar smell that evokes that comforting feeling of fall baking, that warm and cozy flavor - we can thank the spice profile we pair with pumpkin for that.

For these pumpkin cinnamon rolls, I made my own pumpkin spice blend using the same four pantry staple spices that make up Simply Organic's signature blend.

As long as you've got cinnamon, nutmeg, ginger, and cloves on hand, you're one can of pumpkin away from a nostalgic pumpkin spice dessert. My homemade pumpkin spice blend uses 1½ teaspoons ground cinnamon, 1 teaspoon each ground nutmeg and ginger, and ¼ teaspoon ground cloves. All four of these Simply Organic spices are staples in my pantry, and I use them so frequently that I know I'm using the freshest most fragrant spices.

You can certainly grab up a jar of pumpkin spice to replace the individual spices in this recipe if that's more your jam - Simply Organic makes theirs with cinnamon, nutmeg, ginger, and cloves. It's so good you'll probably start adding it to your latte.

Either way, when Fall's aromatic spices are involved, you can't go wrong.

So I added a few things that should help trap in those air bubbles:

The batch with just one rise? The best gluten-free cinnamon buns. Make your dough, roll it out into cinnamon rolls, let it rise in the pan, bake. With this method, you're 1.5 hours closer to soft pillows of spiced pumpkin cinnamon rolls. And that's 1.5 more hours of sleep you'll get in the morning. 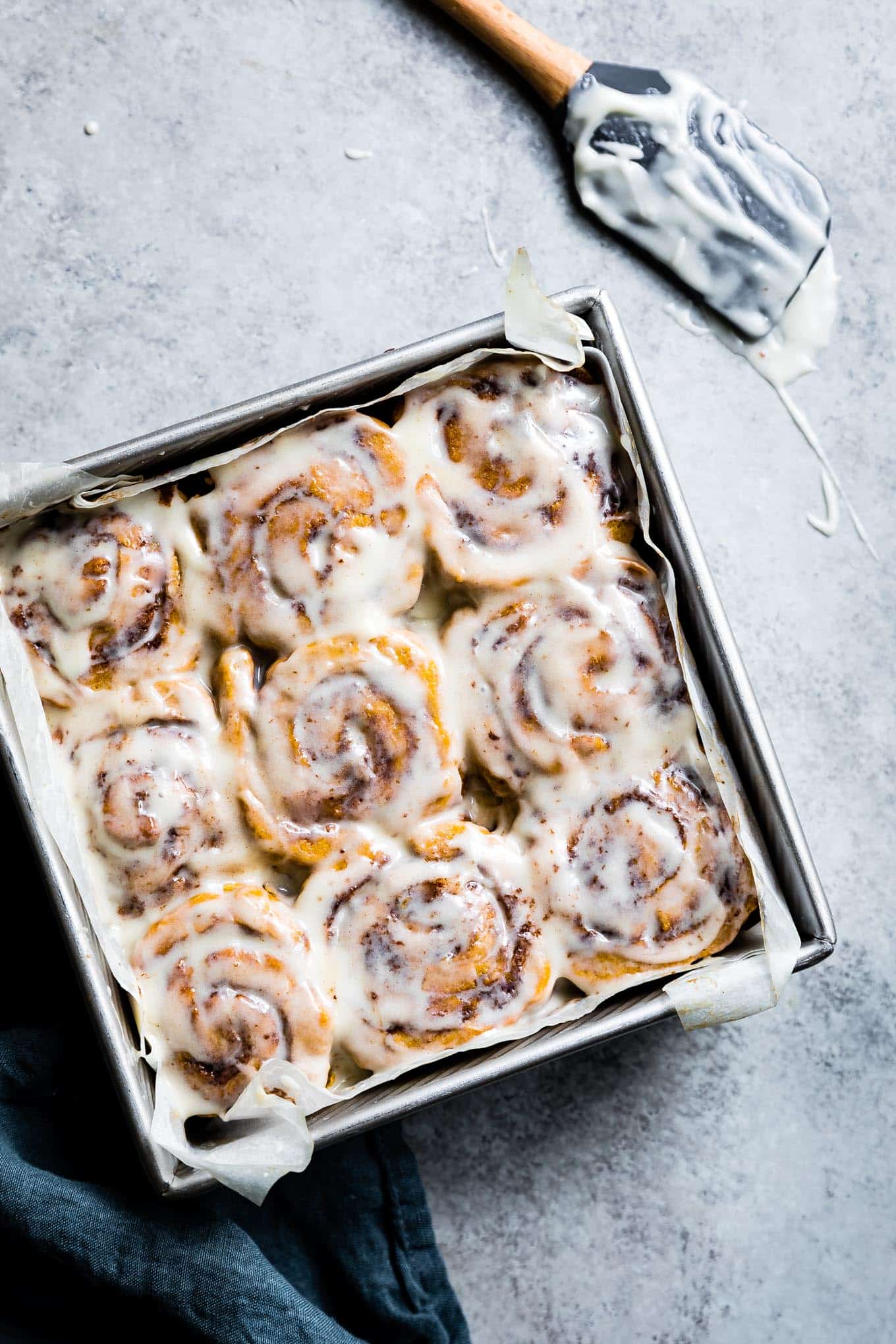 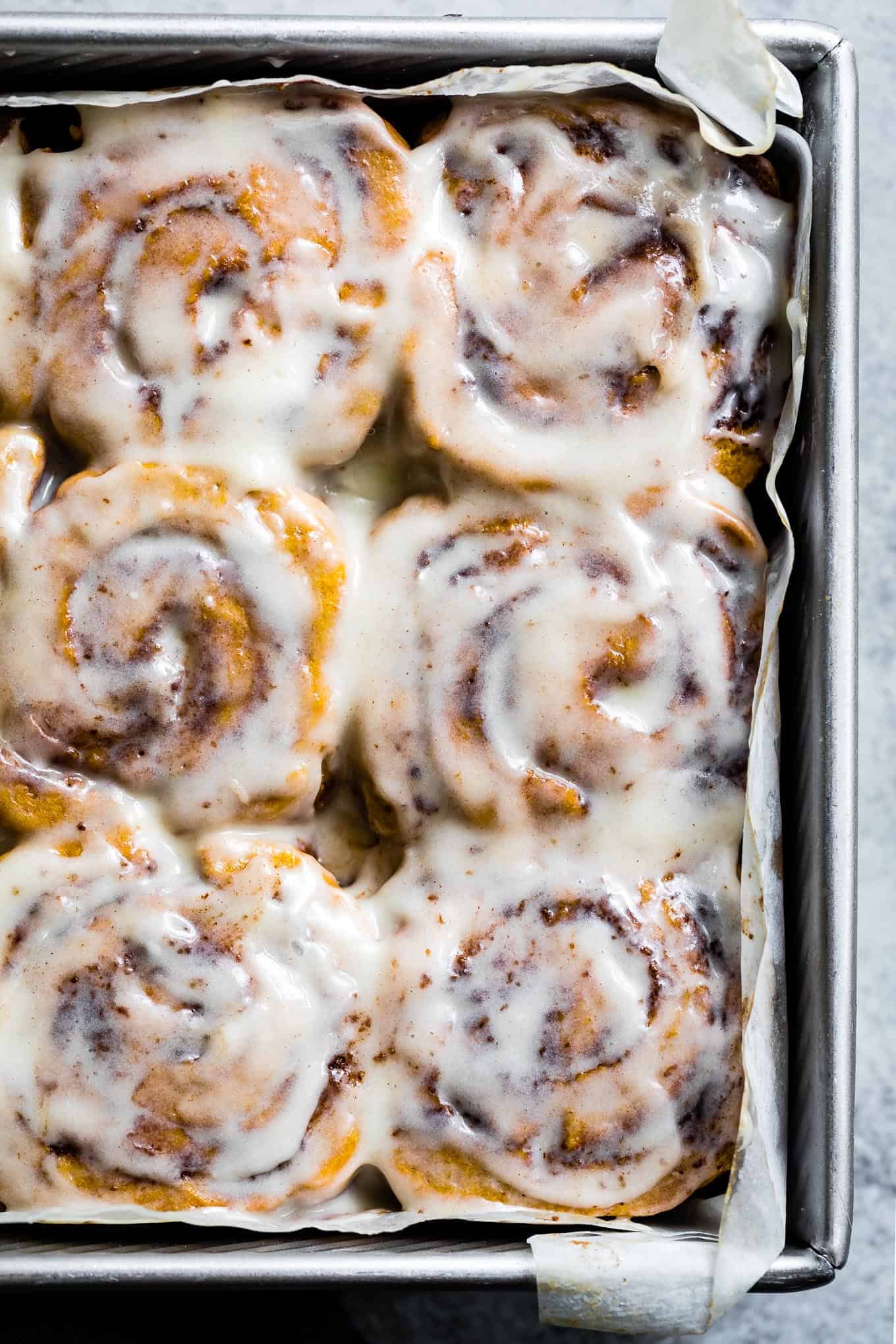 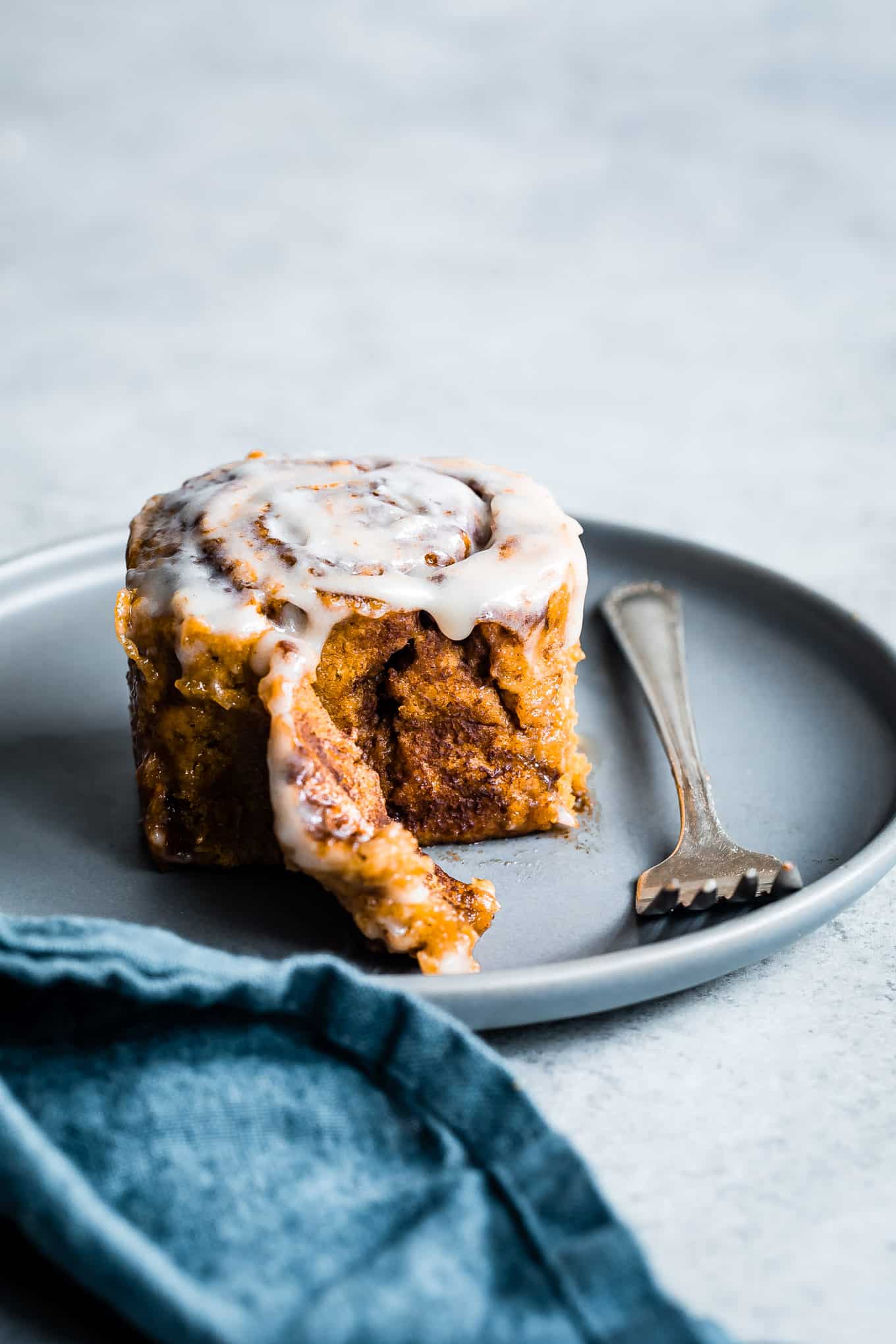 The different types of cinnamon rolls

With all my neighbors tasting and weighing in on the batches, it's come to my attention that there are many different types of cinnamon rolls and people have strong opinions about which kind is right.

Soft and fluffy: There's the dough that bakes up almost like donuts - soft and airy. They're light and fluffy inside and stretch a bit when pulled apart.

Denser and more moist with crisp edges and soft centers: Then there are cinnamon rolls that are a little denser in structure, they're moist with slightly crispy edges and the center softens as you peel away the layers, revealing the ultimate soft cinnamon-spiced center.

These pumpkin gluten-free cinnamon rolls are most like the latter, with one caveat. While the very edges of these rolls are crisp, the inside immediately reveals a soft moist structure that's as if we took the best part of regular cinnamon rolls - the center- and made that the whole roll. 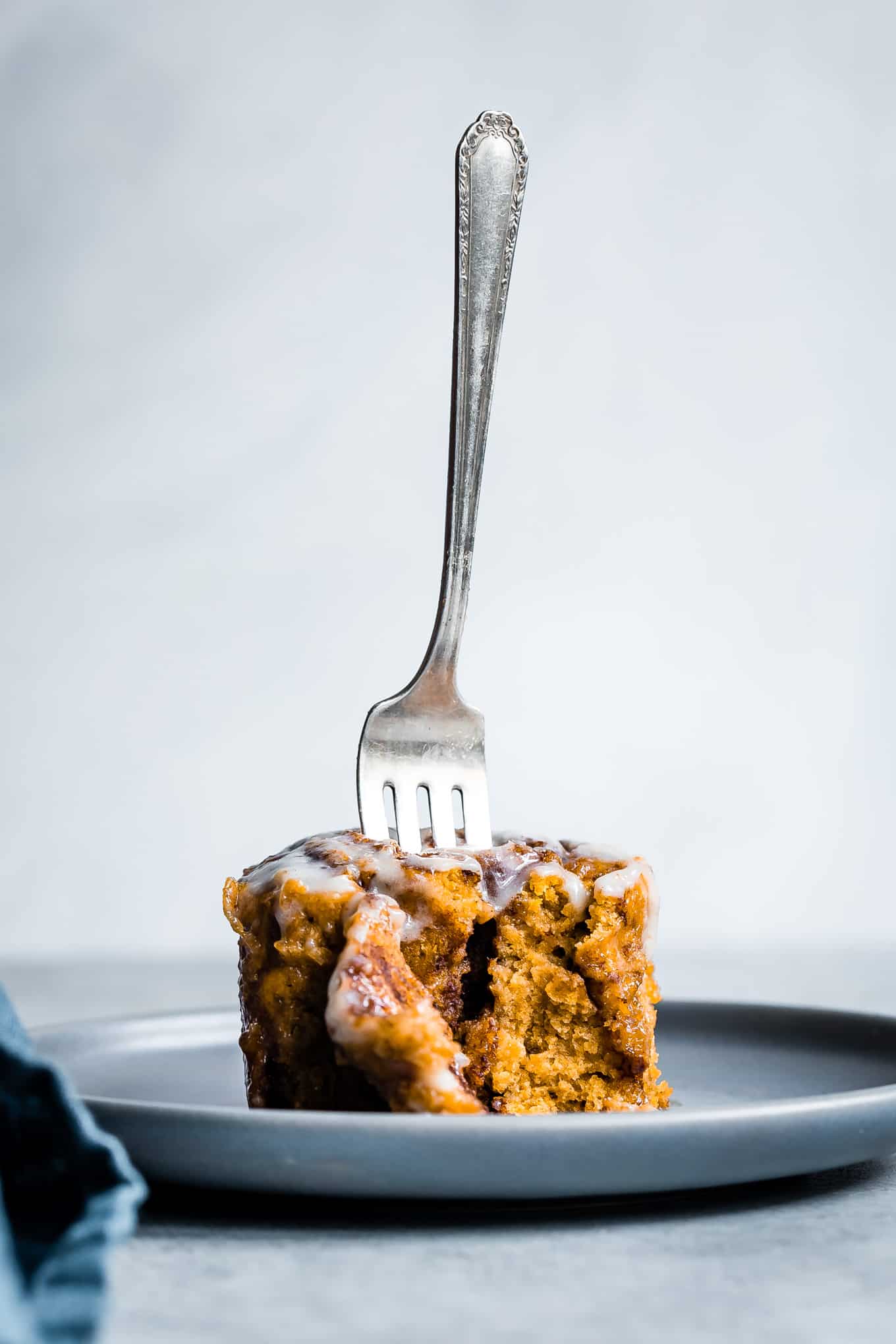 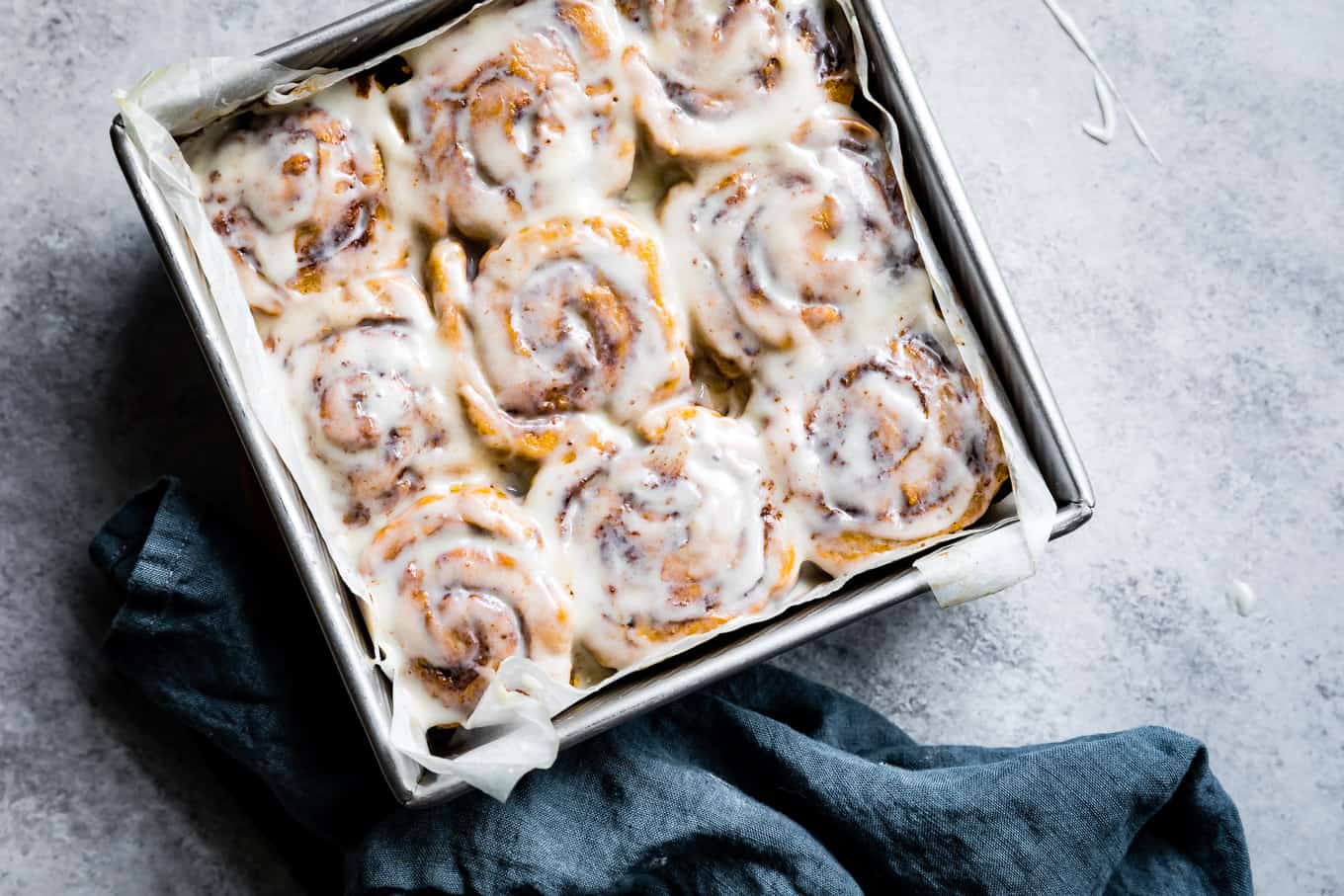 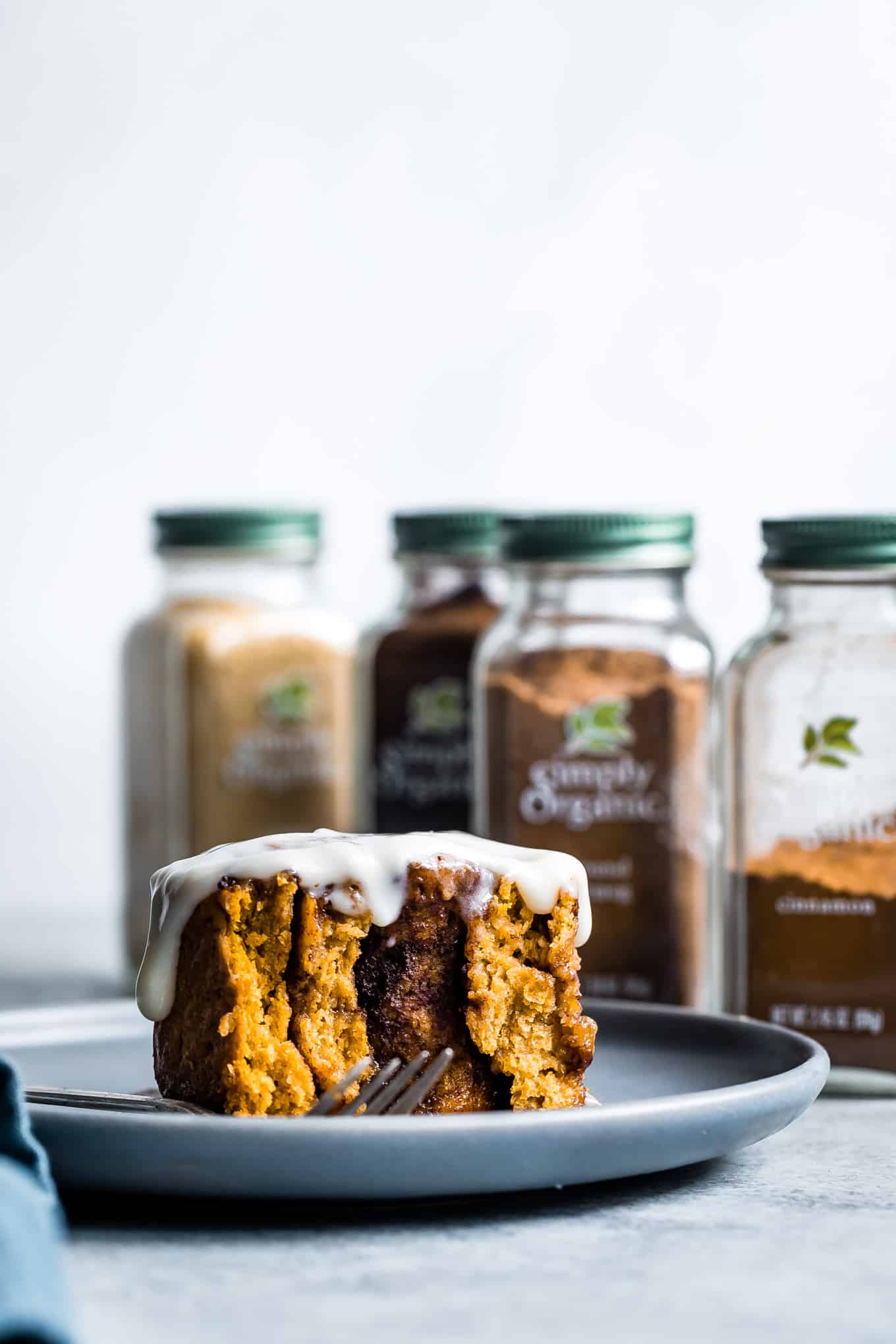 The final test batch came out of the oven just before dinnertime. I ate the first one with my fingers standing over the stovetop, then raced in to give Lucas a bite. Zoella, 2.5 years old, looked up from the story they were reading and asked for one too.

We're pretty strict with her when it comes to desserts and dessert before dinner is unheard of in our house. And still, I couldn't resist giving her a small bite to see the pure joy on her face as she conclusively decided she likes cinnamon rolls. She left the book behind to follow me to the kitchen for another bite, "can I have another bite, please, mama?" She's got me wrapped around her little finger.

There's a reason so many others have a similar cinnamon roll family tradition. The pure simple joy that a batch of fresh-from-the-oven cinnamon rolls evoke is worth its weight in gold. Just as long as you slather it in plenty of cream cheese icing, or as my French Canadian friend Alex referred to it when he forgot the word for icing, "extra cake gravy."

And now, just like my grandma, these pumpkin gluten-free cinnamon rolls will be my holiday morning legacy.

You can also get my recipe for more classic gluten-free cinnamon rolls if pumpkin isn't what you're looking for!

Disclosure: Special thanks to Simply Organic and The Feed Feed for providing the ingredients for this recipe and sponsoring this post! And thanks to you for supporting the companies that keep Snixy Kitchen cooking! 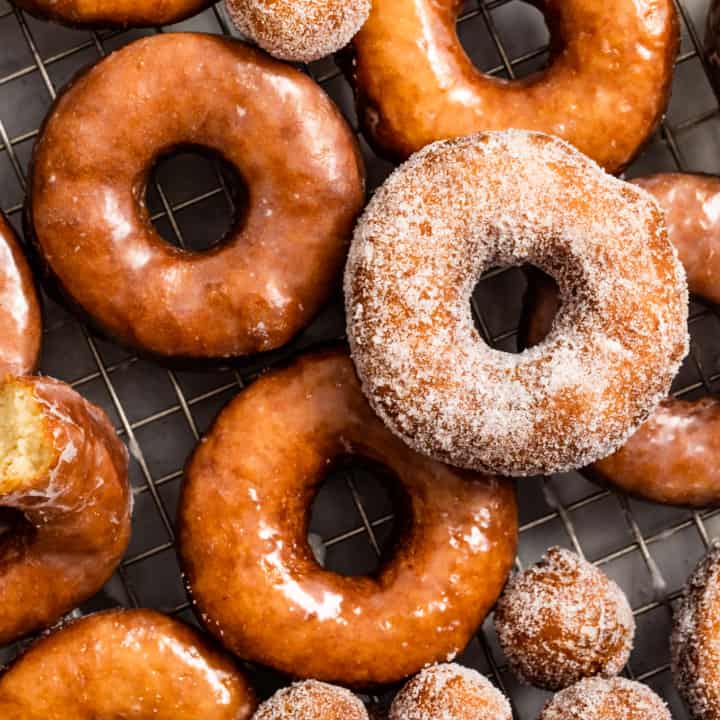 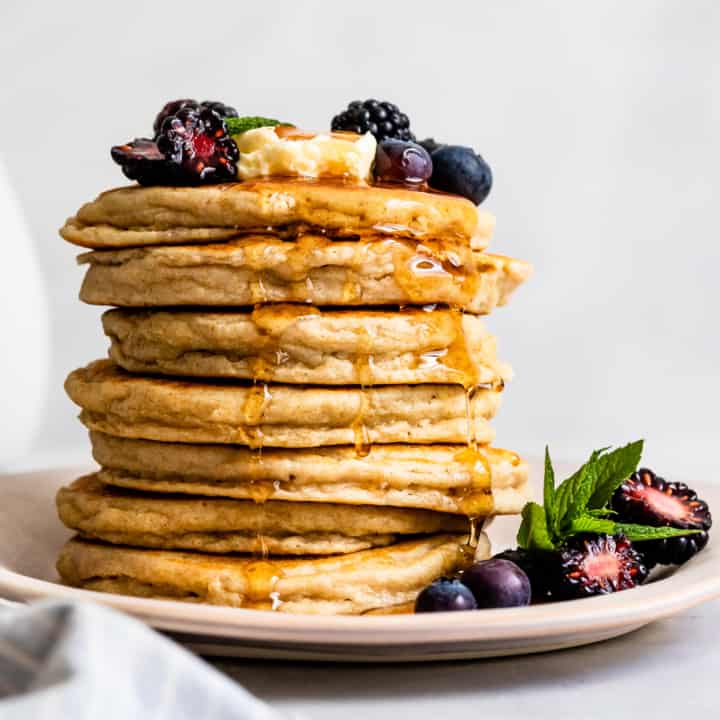