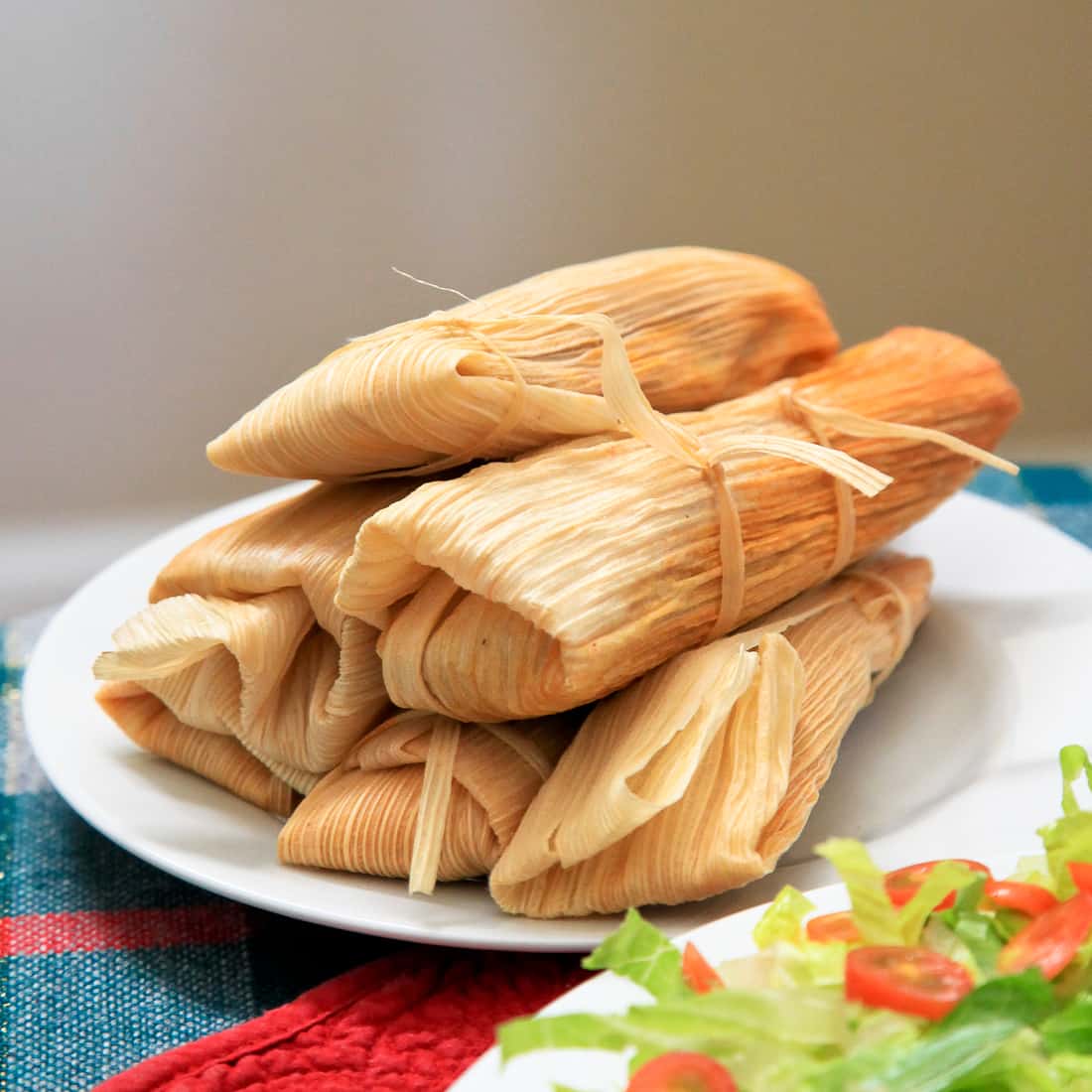 We’re a very traditional family when it comes to holiday meals. For Thanksgiving, an enormous roasted bird sits surrounded by cornbread stuffing, mashed potatoes and gravy, cranberry sauce, sweet potato casserole, and green beans. Dessert is always homemade pecan pie and pumpkin pie. Like clockwork, sometime around mid-November you’d find childhood me begging my mom for ham this Thanksgiving, which she in turn would always promise and usually deliver for Christmas. For the December meal, we’d  swap out some of the sides for my Aunt’s scalloped potatoes and mandarin salad. And if my mom was really feeling adventurous, we’d give pot roast a starring role. This year we went rogue. Mom suggested throwing caution to the wind and trying something new for Christmas; I tossed out the idea of tamales and, like that, it was settled.

I’m pretty sure my mom was drawn to the idea of celebrating a Mexican tradition in honor of my new husband’s family. It turns out though that Lucas’s family eats turkey + stuffing + cranberry sauce + yams for Christmas dinner. What’s more, Lucas has never helped make tamales or even seen tamales being made. At age 10, I wrapped dozens of tamales one afternoon with my neighbor, and my mom took a tamale making class years ago, so we were obviously the most qualified to lead the culinary adventure. Lucas was the most qualified taste-tester and was quickly put in charge of making sure the recipe I invented actually tasted like the San Antonio tamales he ate growing up. 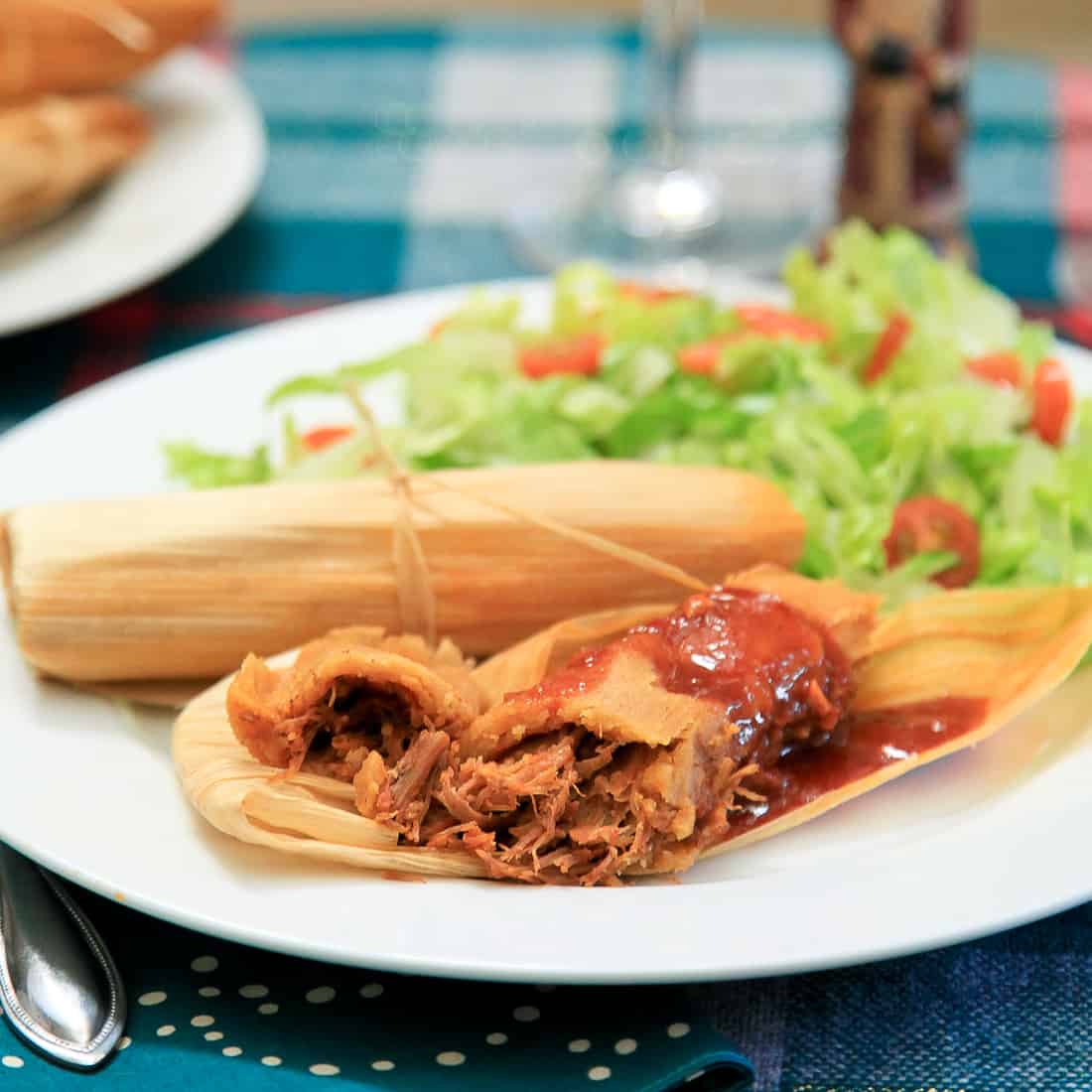 The week before Christmas, my mom came down with a stubborn cold and I was tasked with finding the recipe and making the shopping list. At that time, we weren’t sure how many family members to expect – somewhere between 8 and 14 – so I decided a boatload of tamales (translation: 8 dozen) should do the trick. Normally when I’ve decided to make a traditional dish, like, say, taquitos, I search the web and read through at least 100 recipes. Typically, I discover that there’s a common basic recipe that most people adapt for their own purposes, and I take that recipe and add my spin to it. There’s usually one well-established, often-used recipe floating around the web and bit of perusing brings it to light. I assumed this would be the case with tamales. I mean, how many ways can you really make masa? The filling is pretty standard right? And there’s got to be a traditional sauce to put on top.

Wrong. Every single recipe I found was drastically different. The ratios of lard (I will cringe every time I say ‘lard’) to masa harina differed from recipe to recipe, as well as the tamale yield for each. When we told them we were making tamales for Christmas, people would warn us that they were difficult; I’m now interpreting this advice as, “tamales are difficult because no one can agree on a recipe.” That, or people keep their prize-winning tamale recipes only within the family. I had to wing it, tasting the components as I went (note: tasting raw masa is not so yummy). 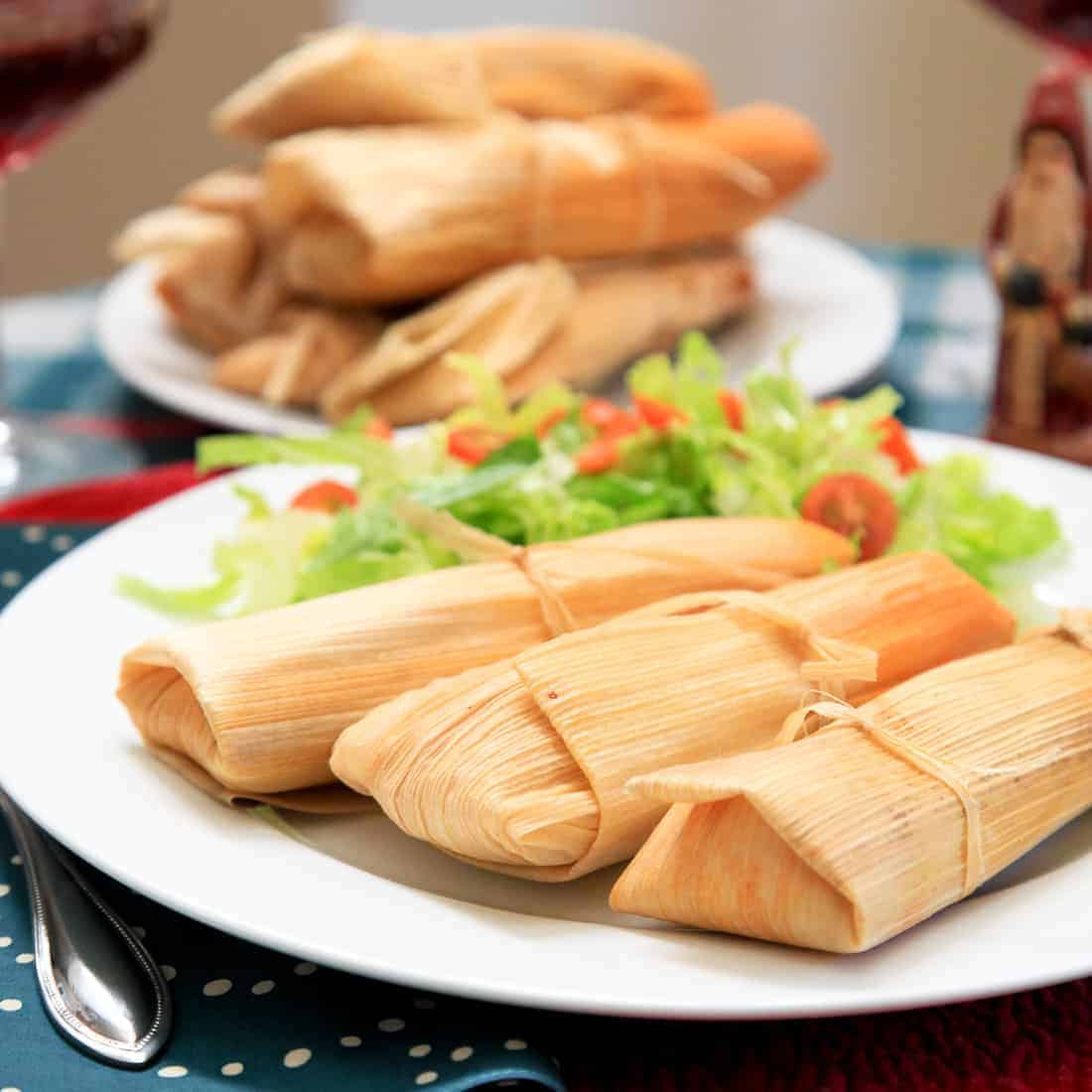 I’m here on the other end of things to tell you, making tamales, while certainly time-consuming, is not difficult. My mom and I started the filling in two crockpots on Saturday night around 1am. We woke up at 9:30am on Sunday and immediately got to work making the chile colorado sauce, using the broth from the slow cooker. My cousin joined in around noon as I was frustratingly beating the lard (cringe) into submission in my mom’s 70s-era stand mixer (when I strike it rich, I’m buying you a KitchenAid stand mixer, mom:). The lard (cringe) was the only part that almost made me throw in the towel. Mom to the rescue. When the masa was ready, Lucas joined us around the table as the four of us wrapped and tied tamales for the next few hours, finishing up the last one around 3:45pm. We steamed them in several pots later that night and packed them in the fridge until Christmas morning.

For our Christmas dinner, we served up a combination of chicken and pork tamales, but the pork tamales were far more delicious, so that’s the version I’m sharing with you. While most people were up early throwing the bird in the oven on Christmas morning, sweating over a hot stove as they prepared a feast, we just popped our tamales on the stove to steam for about 30 minutes and got to enjoy the sunny summery December weather (you heard that right). The result was a moist masa infused with chili and corn, wrapped around a juicy shredded pork filling that fell apart in your mouth, all topped with a chile colorado sauce rich with whole chile spice to round out all the flavors. We ate tamales the whole week after Christmas and no one complained. This is the one, ya’ll. A winning recipe. All in a day’s work. 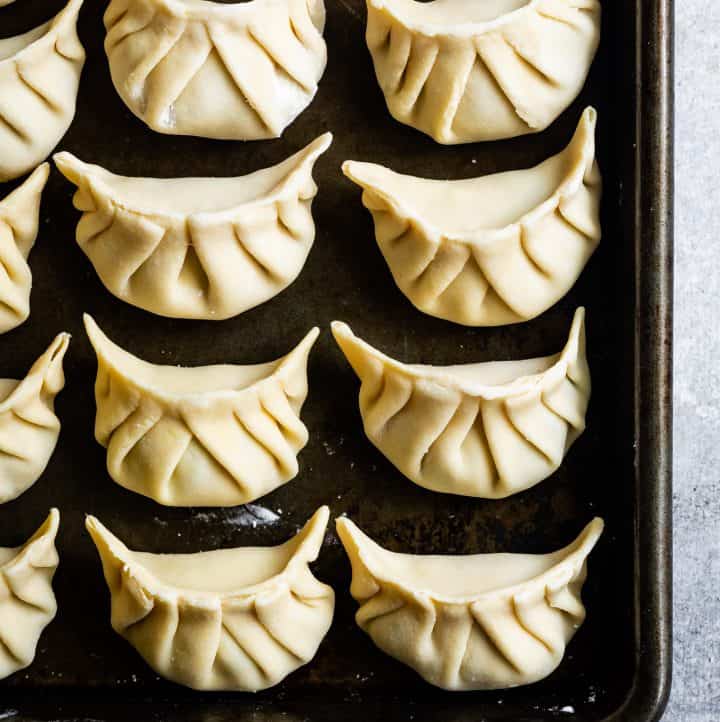 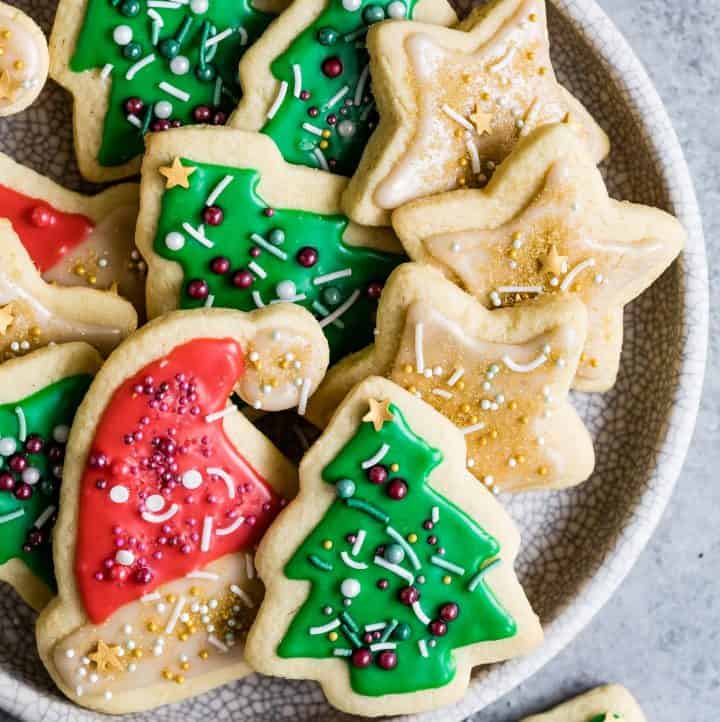 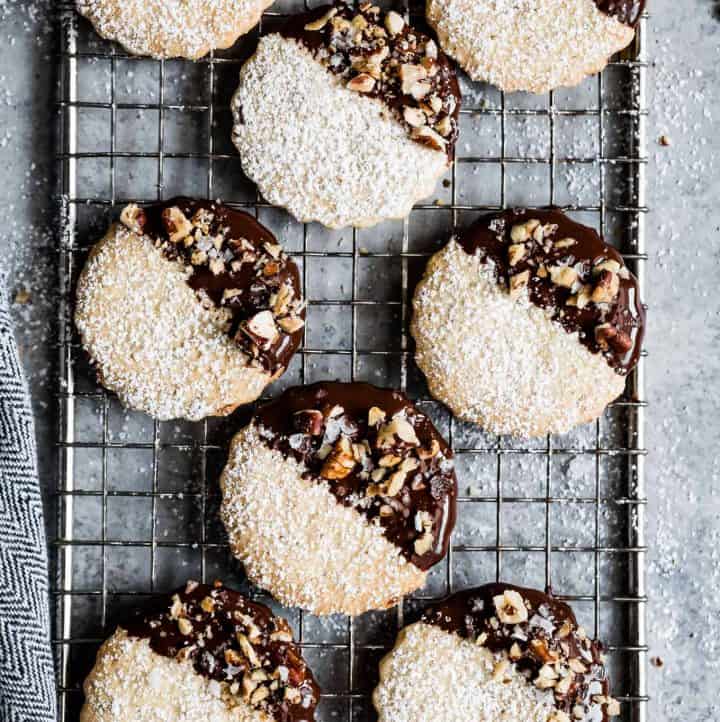 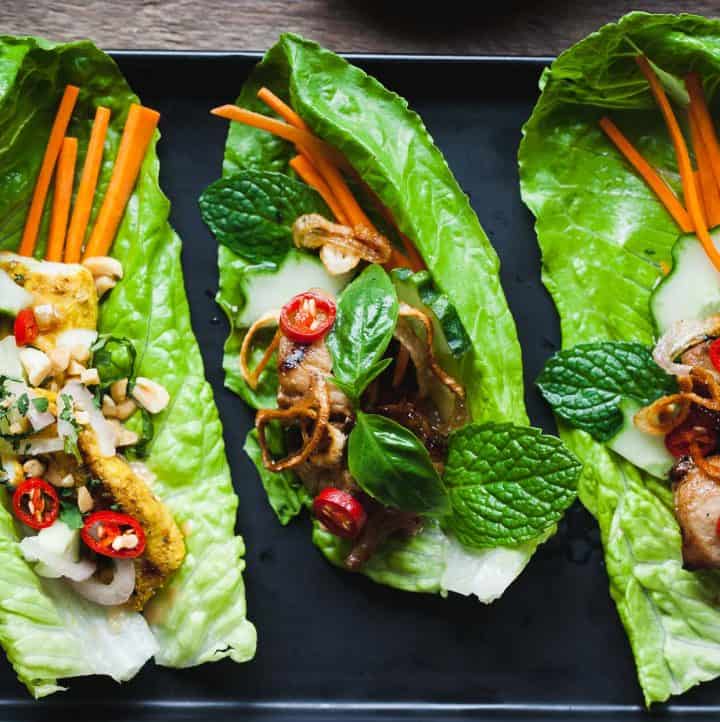