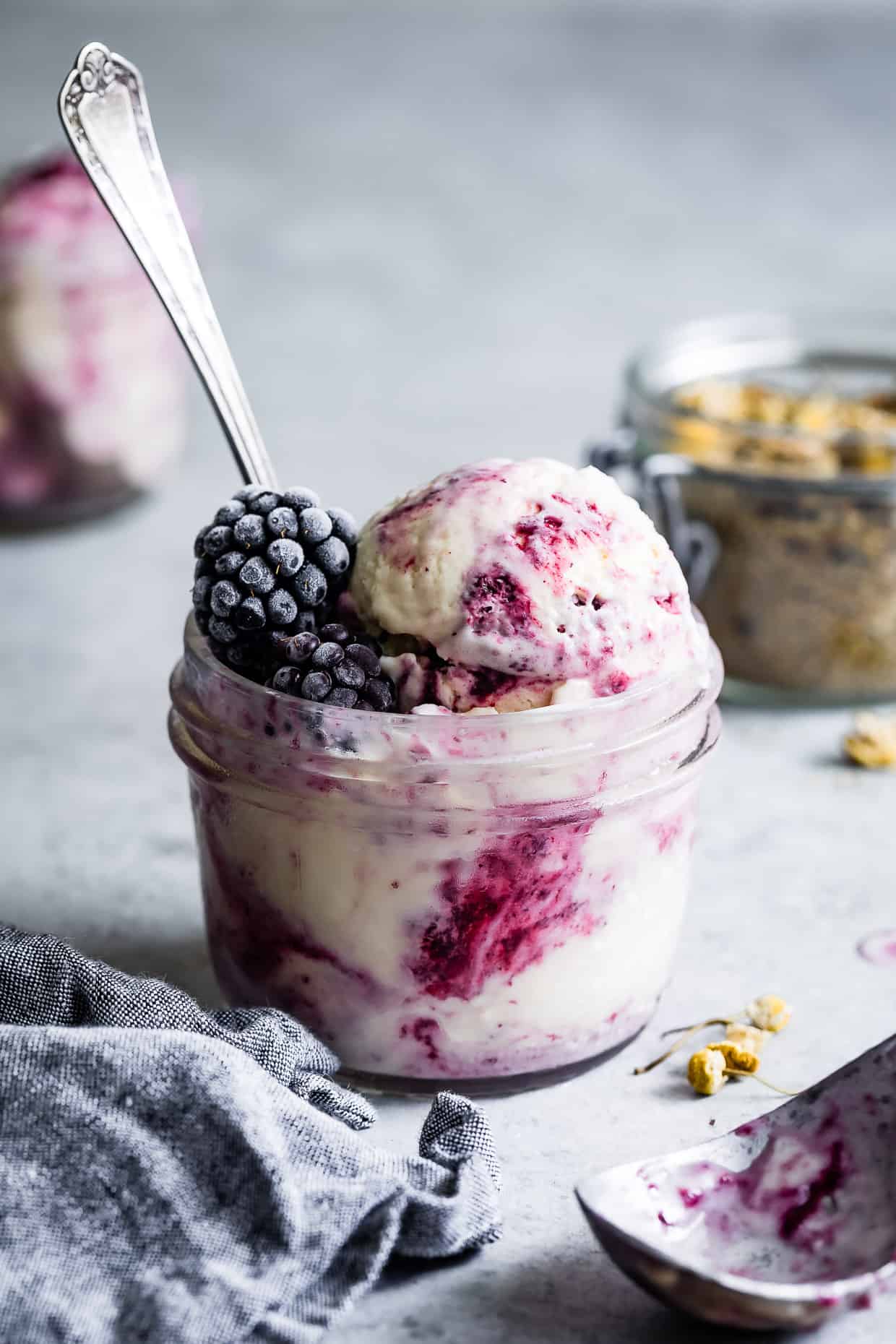 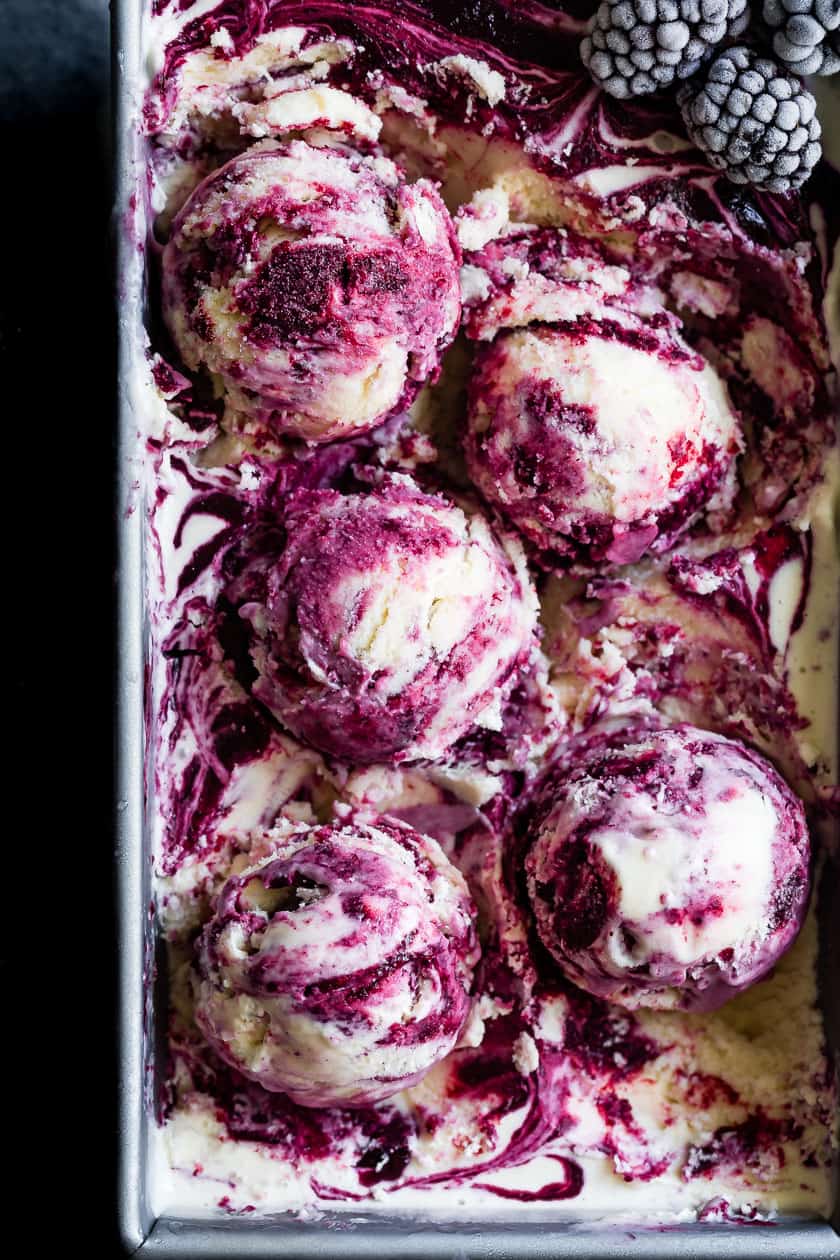 Even though folks all over are heading back to school, summer's not quite over yet. As far as seasonality goes, ice cream temperatures are actually just beginning to peak here in the Bay Area! There's still plenty of time for homemade ice cream, which will probably help soften the ease back into a school-time routine anyhow, right?

With our tiny babes, we don't have "back-to-school" in our house just yet, but Lucas heads back to work after his two-month paternity leave on the Monday after the official last day of summer. It took us until last week to make our way through our new-baby prep freezer dinners to clear out space for the ice cream maker bowl, which seems like a sign. I plan to make sure we've got plenty of homemade ice cream on hand to get us through the transition. We'll have crazy days and share berry ice cream together at night.

We're just in time to take advantage of blackberry season and freeze up a batch of this chamomile blackberry ice cream. This floral berry ice cream is made in partnership with Driscoll's and The Feed Feed using my favorite late summer bramble berry! 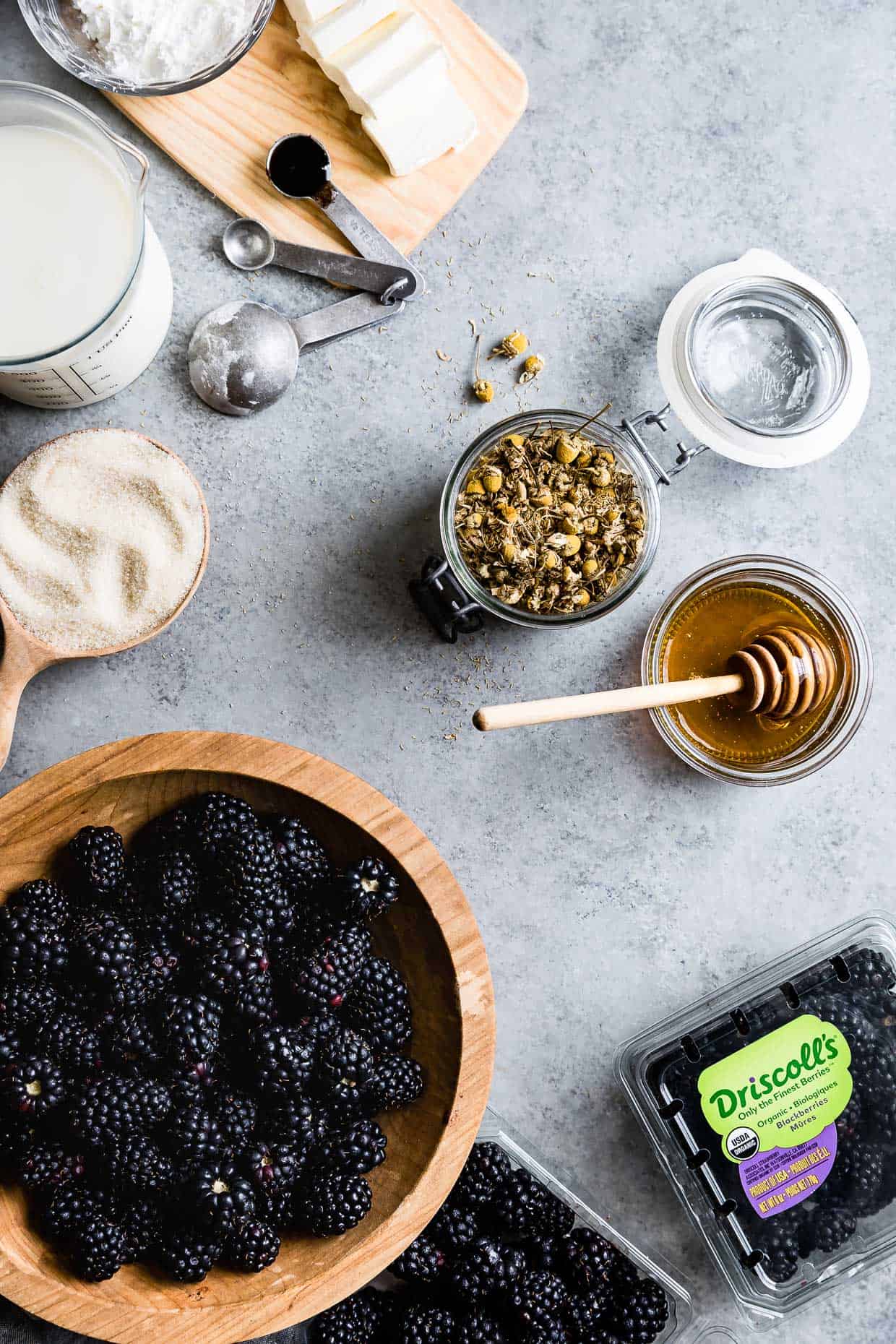 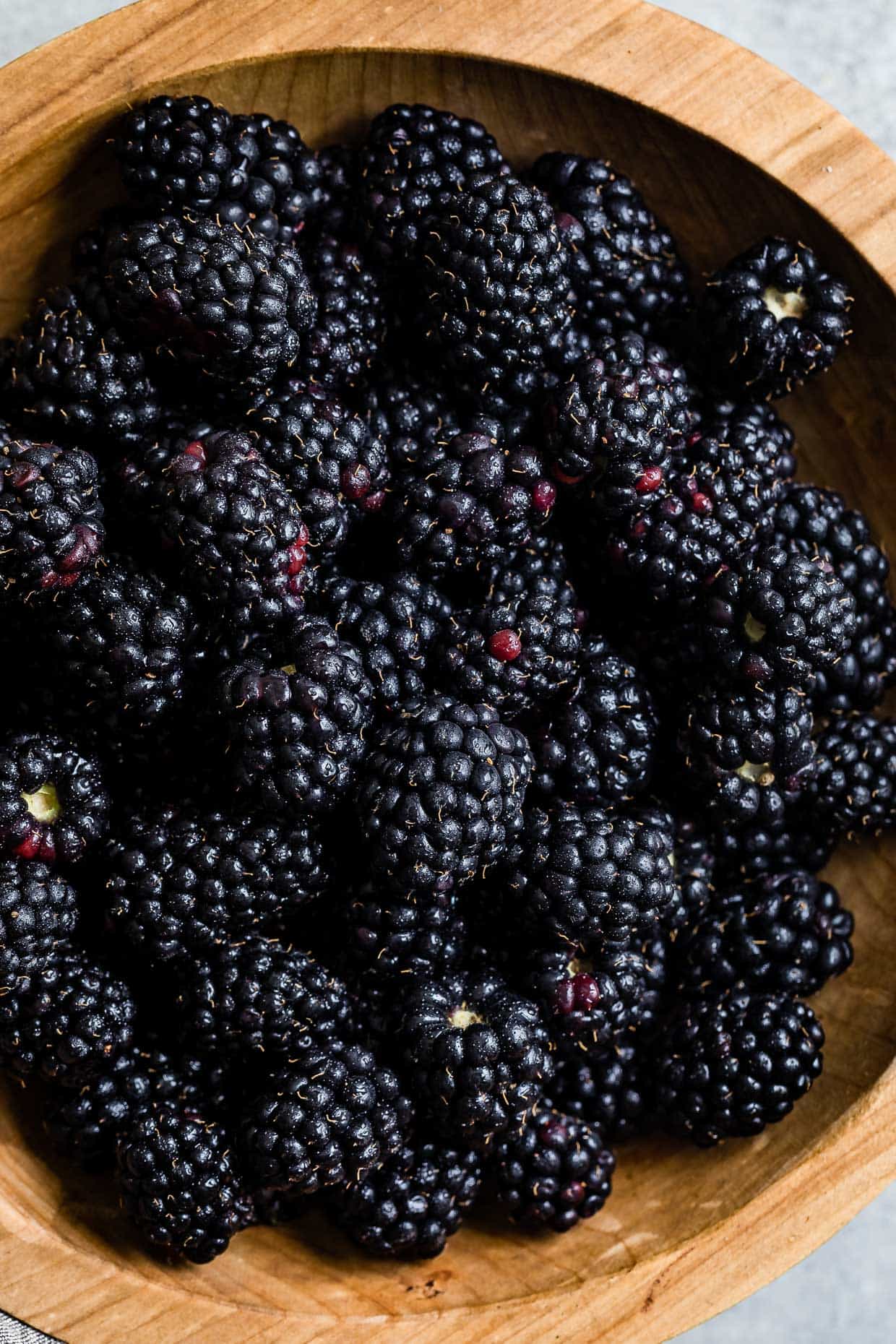 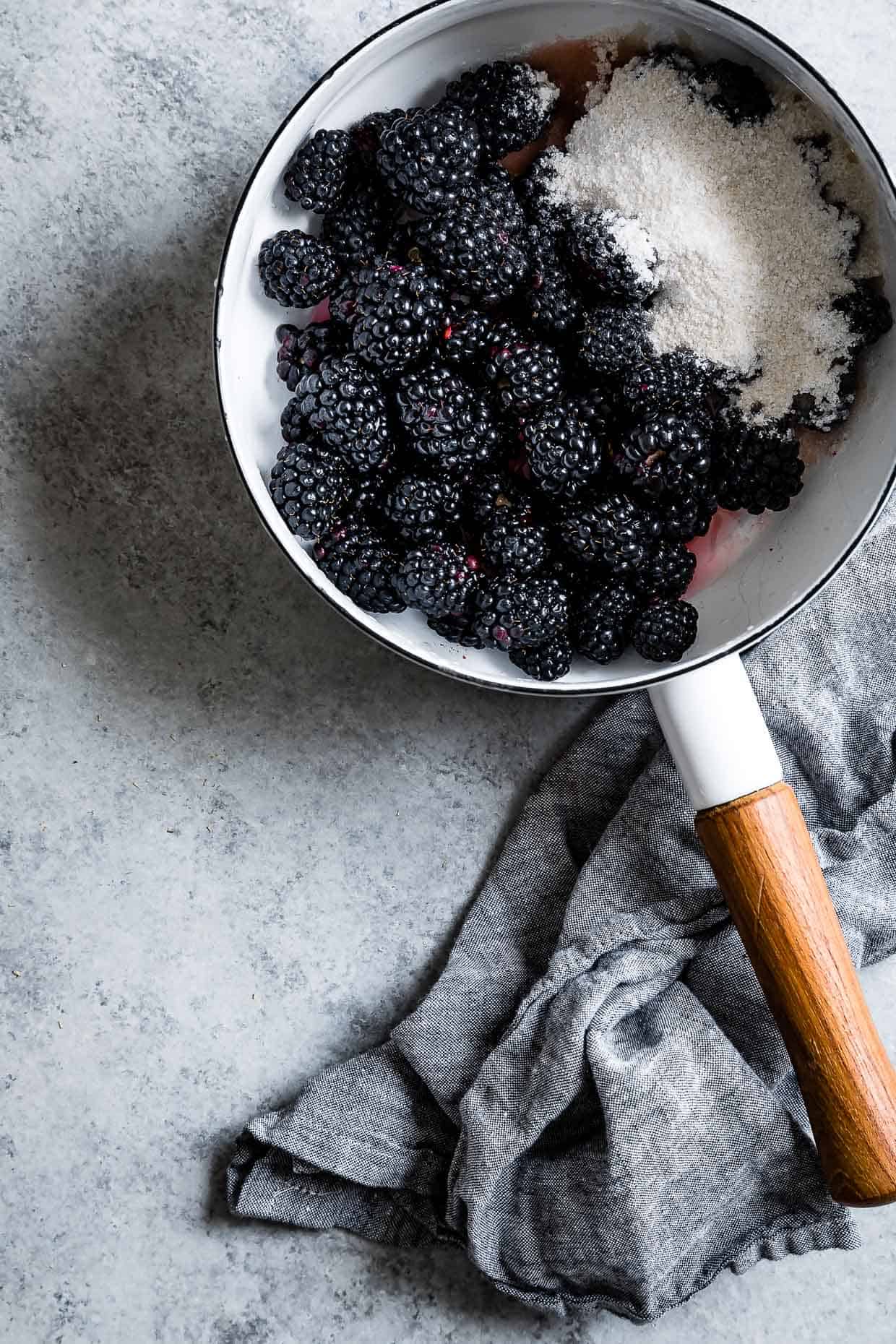 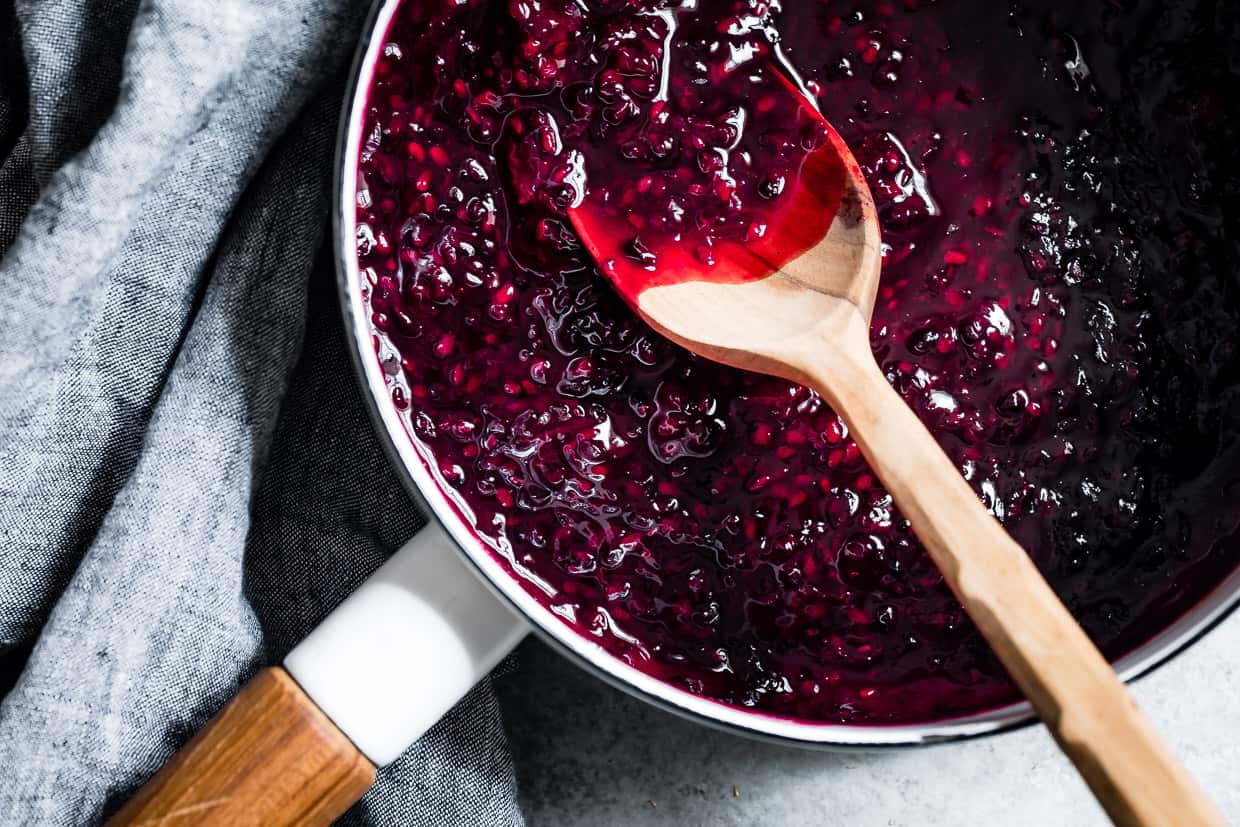 For the past couple weeks, we've been rewarding ourselves for getting two kids into bed by sitting down with scoops of this blackberry swirl ice cream together like a mini date night every night. Over Labor Day, we took advantage of sleep-time to make a 3-hour car ride to my family cabin with a toddler and an infant. Leaving at bedtime though meant we couldn't enjoy our ice cream treat unless we ate it in front of (and shared with) the toddler before we hit the road. To be honest, there's no greater joy than that of a toddler eating a bowl of ice cream, especially when there are pink and purple berry hues involved - it's possibly one of my most favorite moments to watch. But you better believe I learned my lesson when I gave Zoella a tiny scoop of ice cream right before bed a few nights earlier. Ice cream is now strictly a daytime treat for Zoella.

If you thought I'd just suck it up and skip my nightly ice cream, then clearly you don't know me very well.

When the entire car was packed and both kids were ready for bed, I snuck the ice cream out of the freezer. To keep Zoella distracted, I sent her into the living room to help daddy put his shoes on while I ate spoonfuls straight from the carton. It took quite a bit of prompting for Lucas to understand why I insisted the two year old help him put his shoes on. Fortunately he's a willing accomplice and knows exactly who he married. 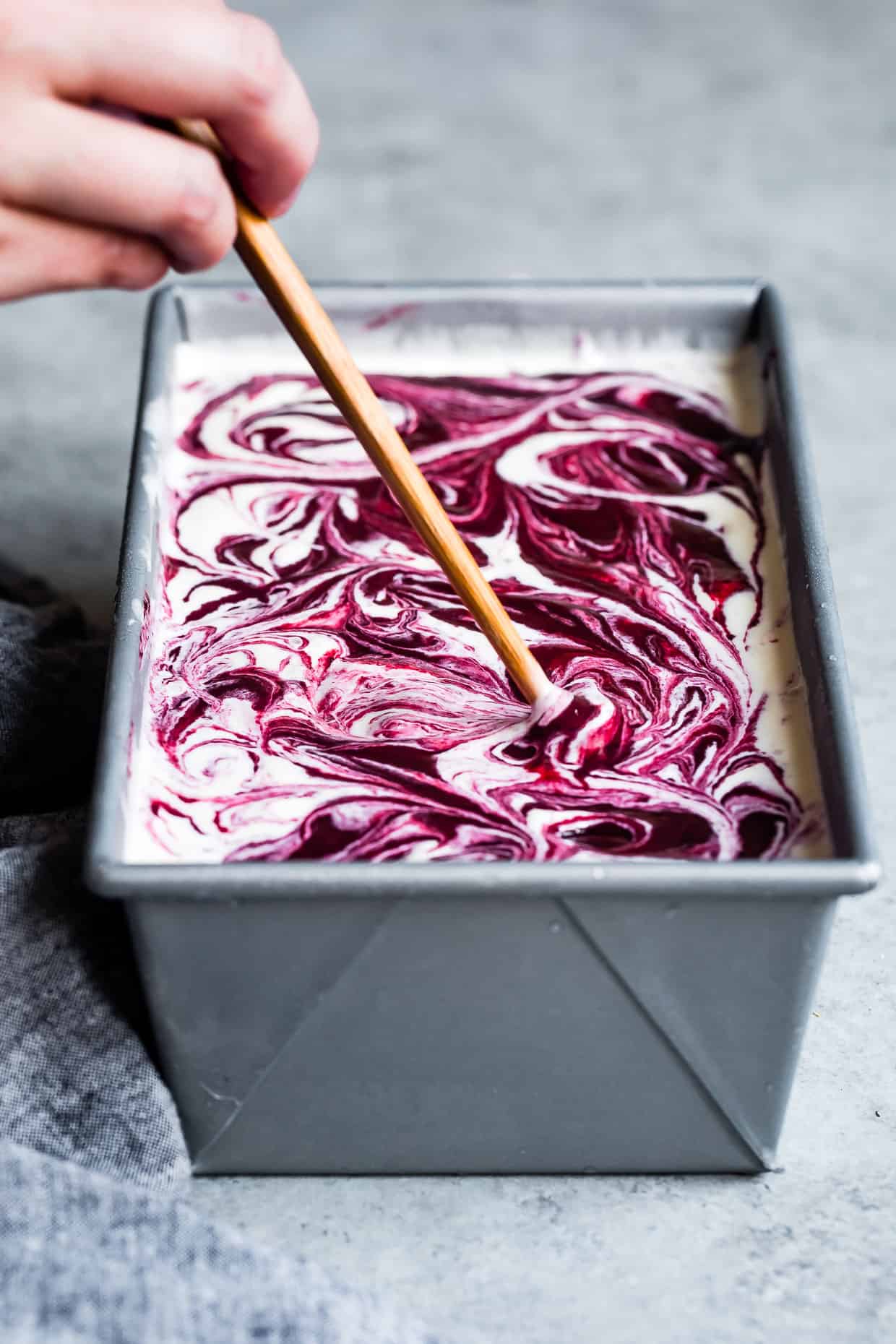 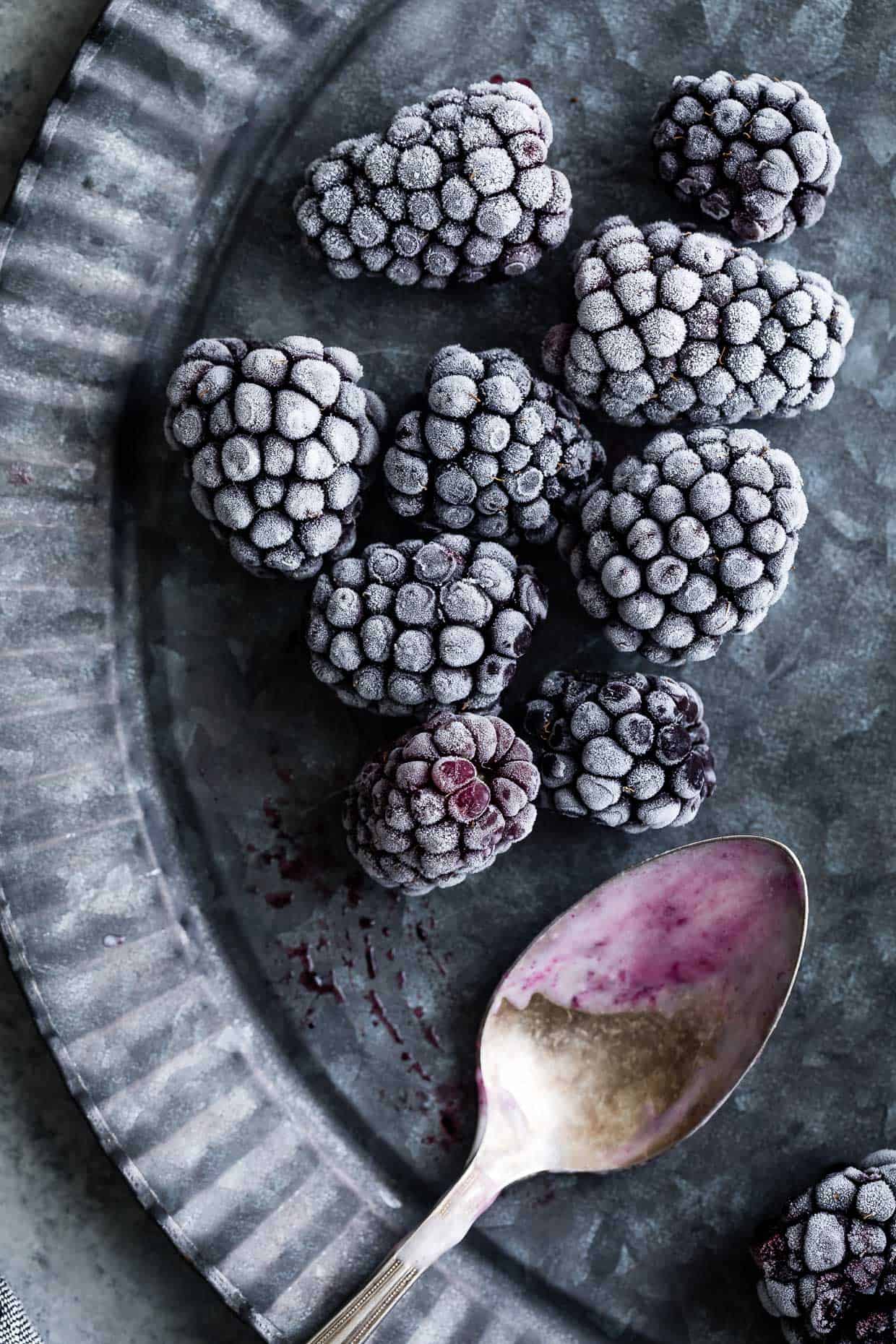 When making a blackberry mix-in for ice cream, the burst of flavor you get from the swirl depends on delicious blackberries as a starting point.  Since the base of this ice cream is steeped with chamomile, I wanted the blackberry compote sweet enough to stand out against that backdrop. For this blackberry swirl, I used two clamshells of Driscoll's organic blackberries, which were sweet and juicy to start - they were neither overly mushy nor underripe and bitter. This is no accident. Driscoll's Research & Development team selects only the top 1% of most flavorful berry varieties and cross-pollinates with the best parent plants to create the delicious berries right out of the clamshell.

California blackberries are reaching peak season right now at the end of summer, which means the best of the best are available at the market! Blackberries have long been prized for their use in pies and jams and that's because cooking it down into a compote makes the flavor pop even more.

As if the bright blackberry compote swirl weren't enough, I served this blackberry ice cream with some frozen frosty blackberries as garnish. You know those gelato shops that have a garnish on each flavor bin as a nod to its ingredients? A decorative fancy-cut pineapple or kiwi, for example. Somehow it makes it taste that much more fresh, even though they don't even serve you that garnish on your scoops.

But why not serve them up too? I took an extra clamshell of washed and dried fresh blackberries and spread them out on a baking sheet in the freezer while the ice cream was firming up. As soon as they come out of the freezer, they turn picture-perfect frosty to pop right on top of the scoops. Work quickly or use chopsticks to avoid disturbing the perfect frostiness.

We then ate the rest of the frozen fresh blackberries as a healthy summer snack because we couldn't put them down! 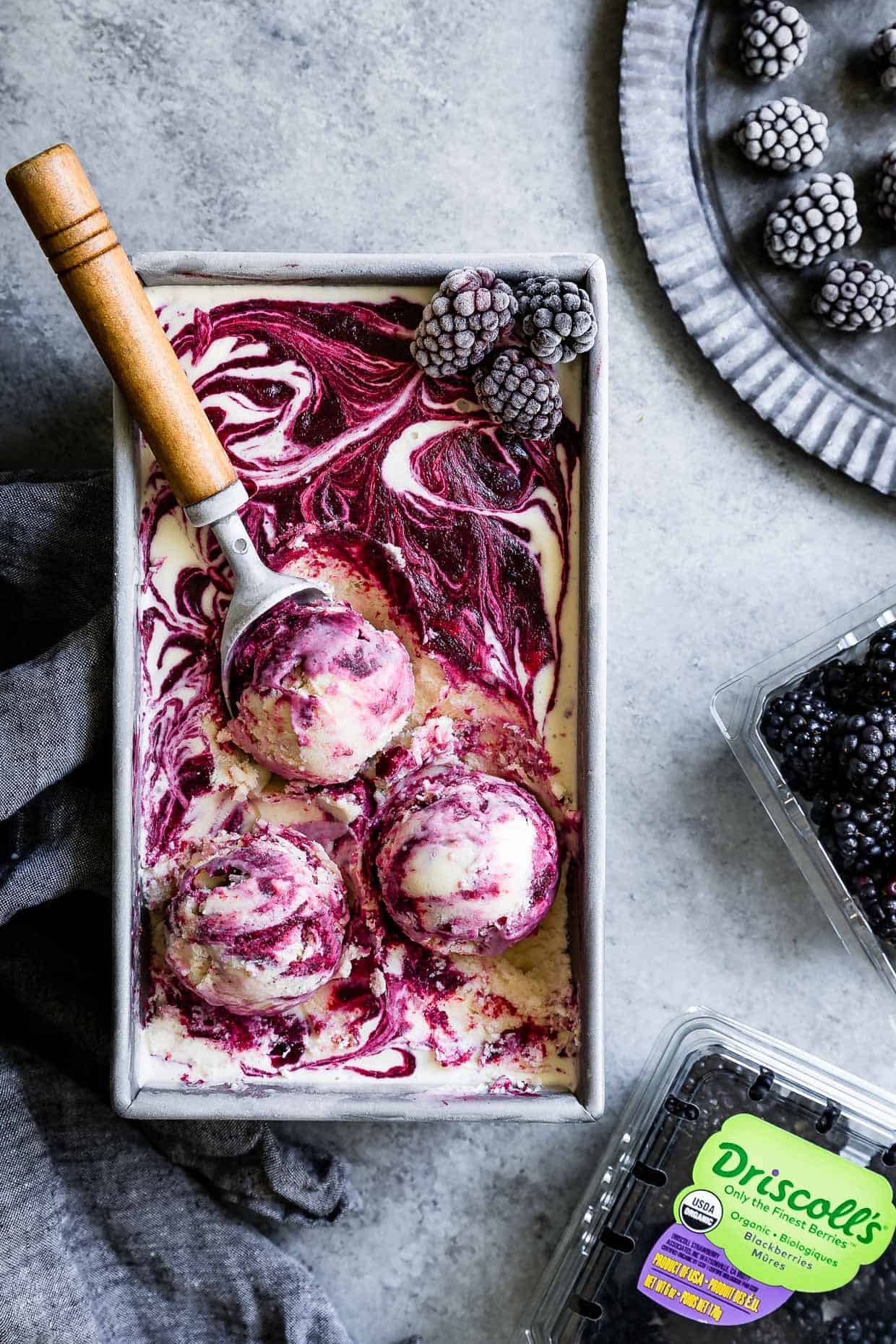 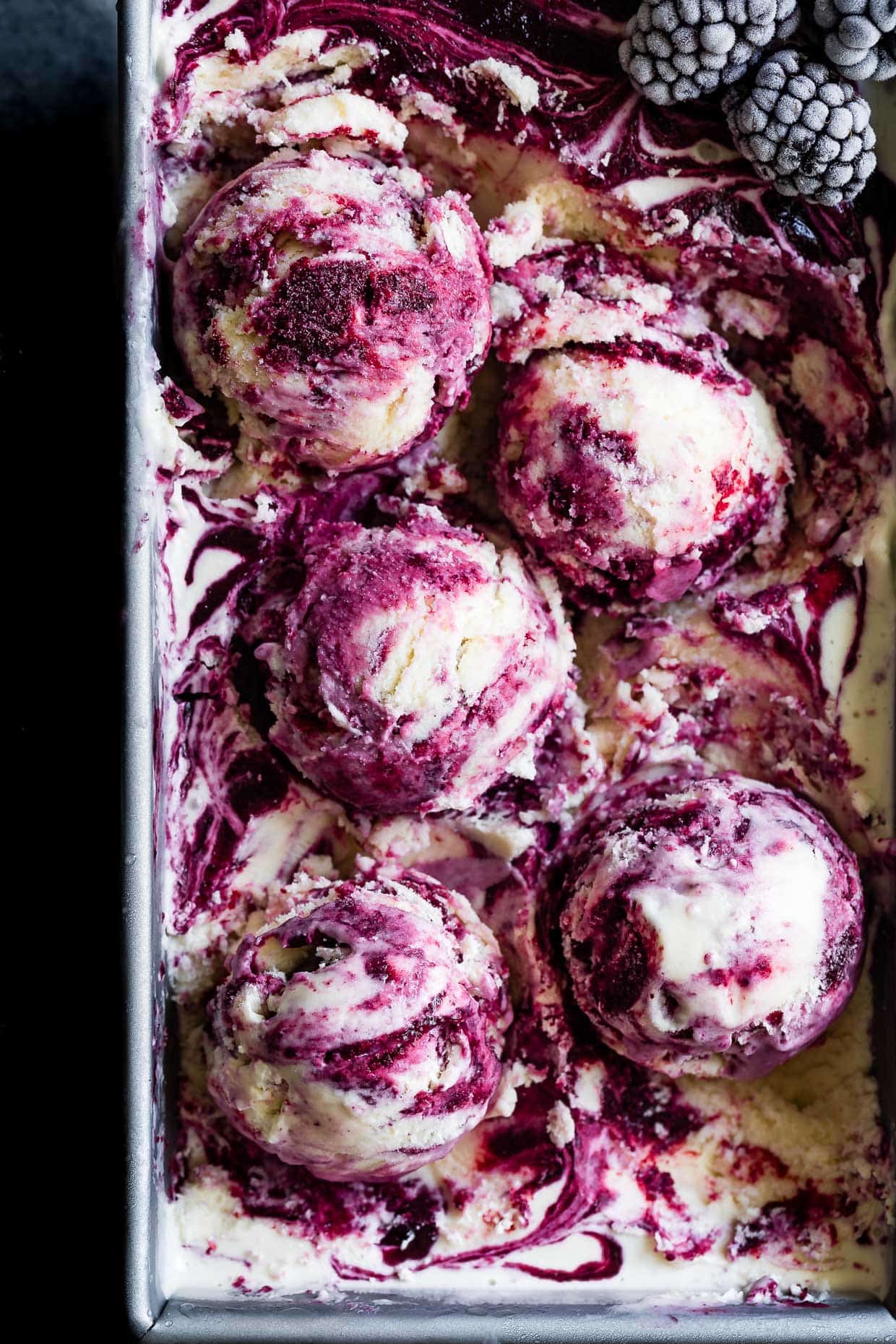 How to make a blackberry swirl ice cream

In addition to intensifying the flavor, cooking the blackberries down into a compote before swirling it into the ice cream also helps keep the blackberry swirl soft enough to scoop. Cooking the berries with additional sugar reduces the freezing point and cooks down some of the liquid so the berry swirl doesn't freeze rock solid and icy.

After cooking it down, the blackberry compote gets pressed through a fine mesh sieve to remove the seeds, which would otherwise leave an unpleasant crunchy grainy texture. Smooth berry swirl ready for chamomile blackberry ice cream!

The last important tip when adding a swirl or mix-in to your ice cream is to reduce the sweetness of the overall ice cream base to account for the sugar in the compote. I start with an ice cream base that's thickened with corn starch and has cream cheese added for richness - a method created by Jeni's Spendid Ice Cream. This base method is my go-to when making dairy-based ice cream because it's super smooth without feeling overly heavy from an egg yolks custard.

With that as my starting point, I cut down the overall sugar in the chamomile-infused ice cream to get it ready for a sweet berry swirl. Doing so both balances the sweetness of the finished ice cream and also keeps it from getting too soft and melty from too much sugar. 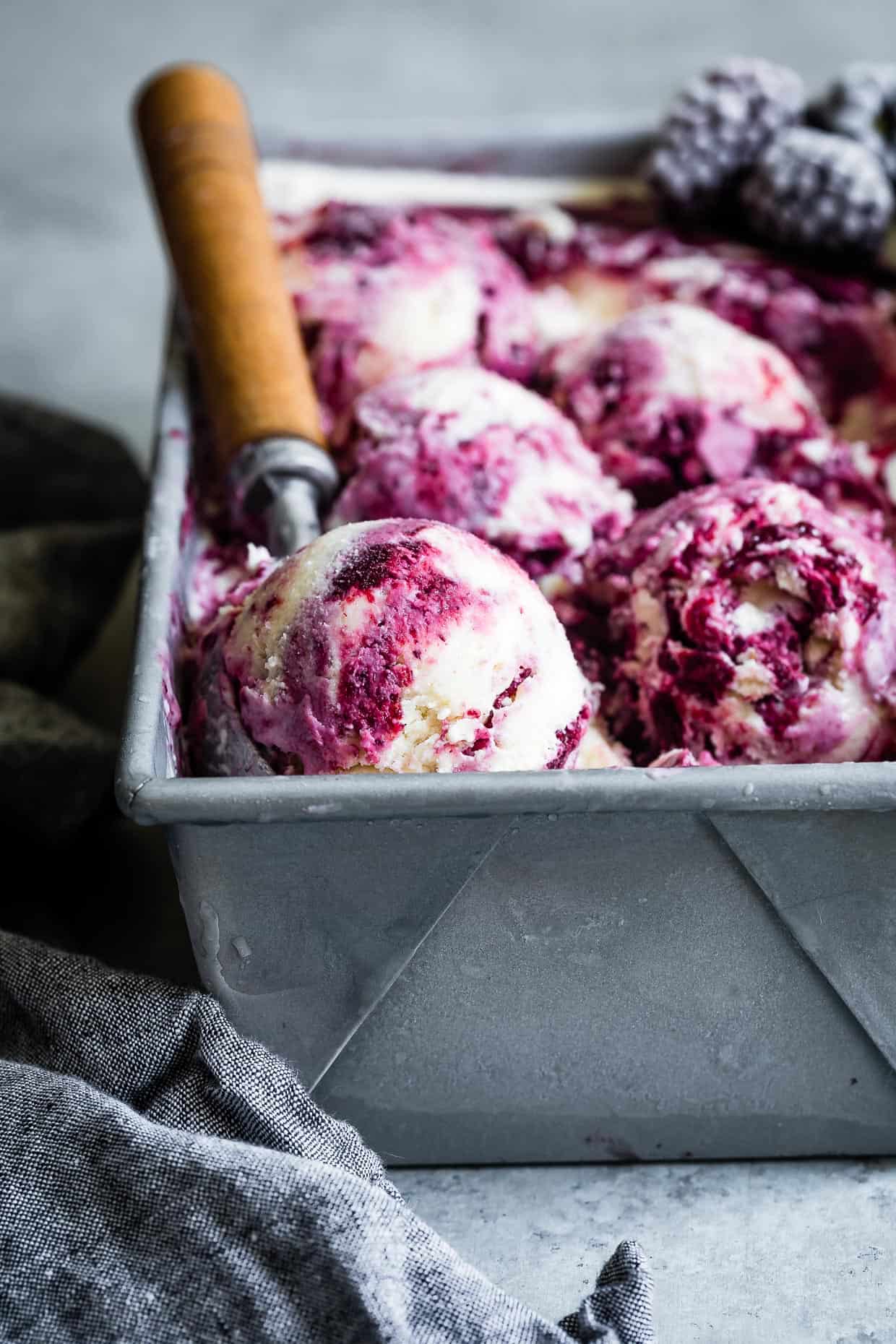 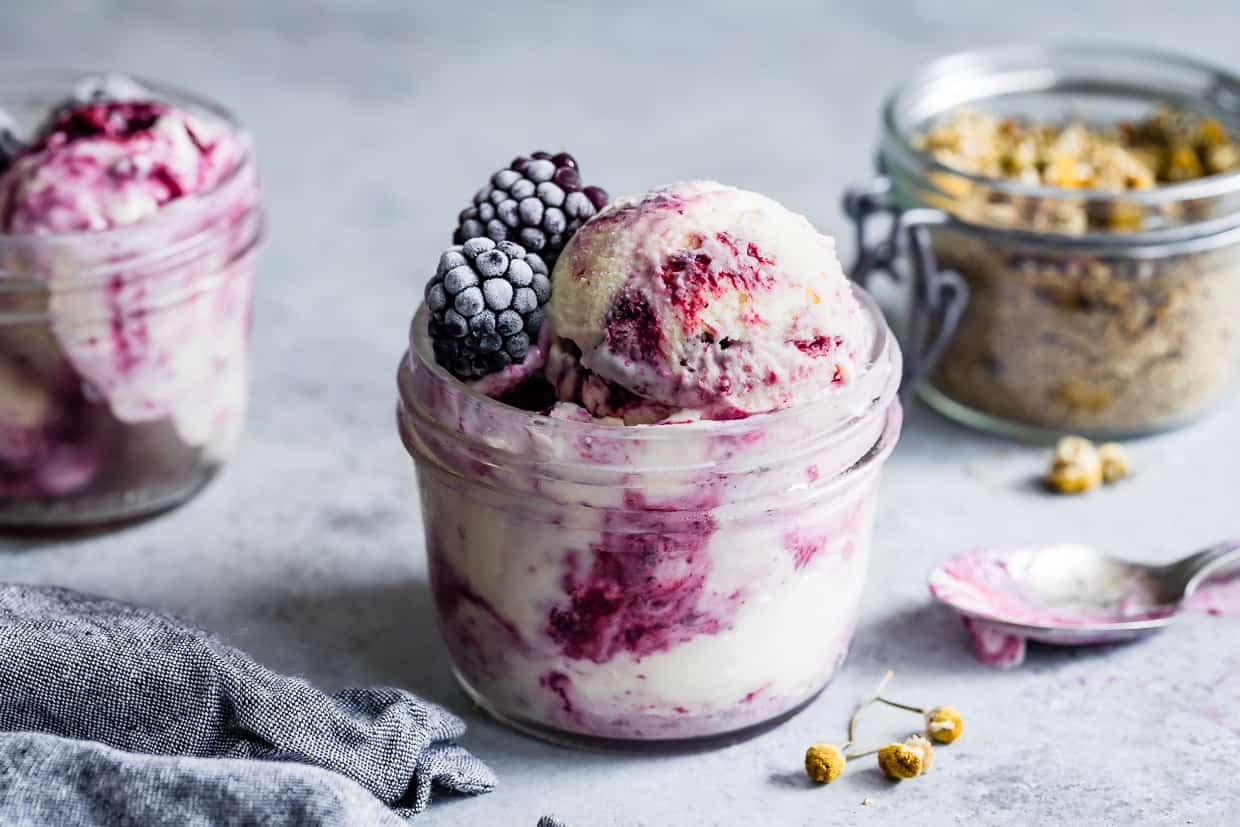 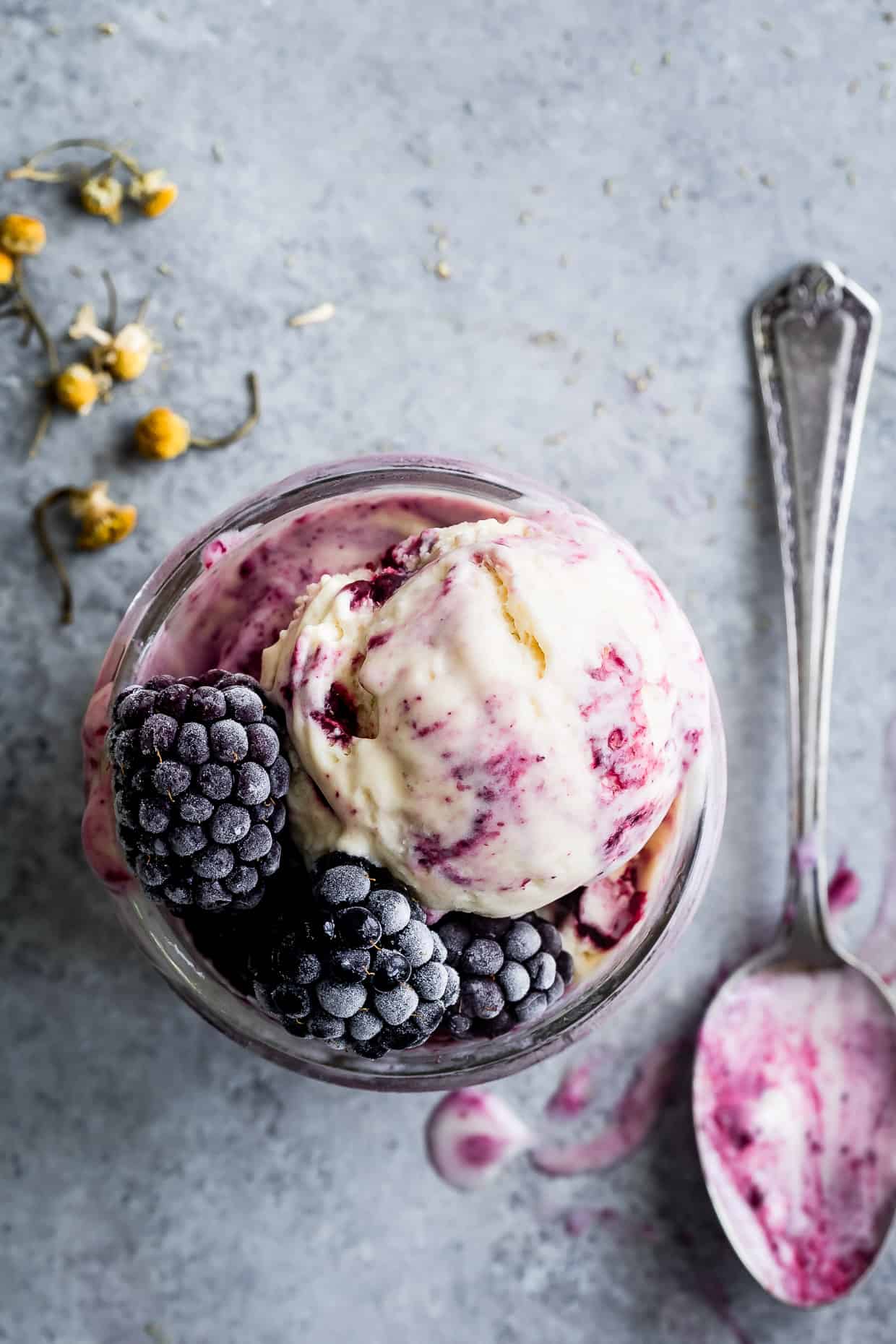 The final swirly ice cream has flowery herbal notes with a hint of honey sweetness and a bright brambly blackberry pop. This floral berry ice cream is a luscious late summer dessert that's perfectly balanced between creamy and bright.

I plan to make homemade berry ice cream a summer family tradition because it's the best way I know how to bottle Zoella's pure bliss. Head over to learn about Driscoll's #BerryTogether campaign. If you make this recipe, share it on Instagram or Twitter with the #BerryTogether!

Disclosure: Special thanks to Driscoll's in collaboration with The Feed Feed for sponsoring this post! And thanks to you for supporting the companies that keep Snixy Kitchen cooking!

*You can't taste the vodka in the finished ice cream, but adding the vodka will create a slightly softer and creamier ice cream that makes it a little easier to scoop when frozen. Without, the ice cream is still just as delicious! 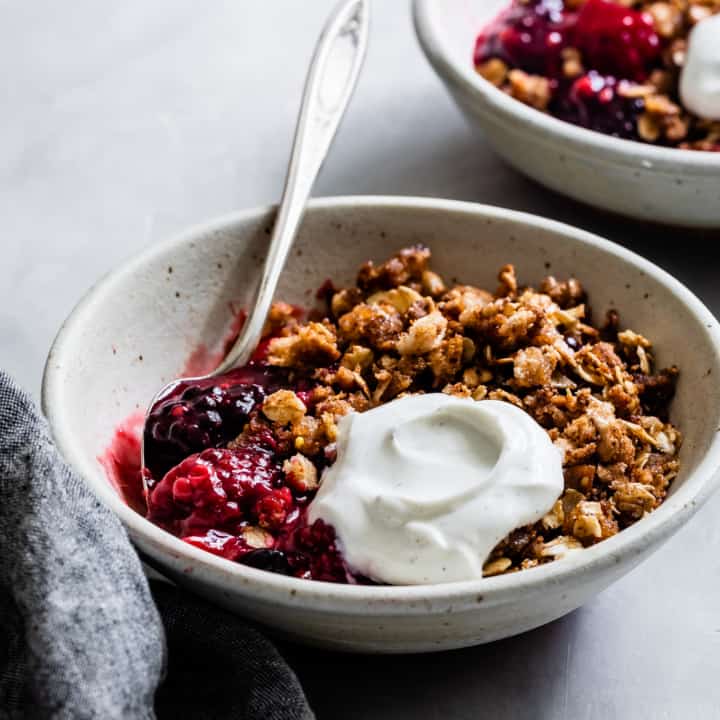 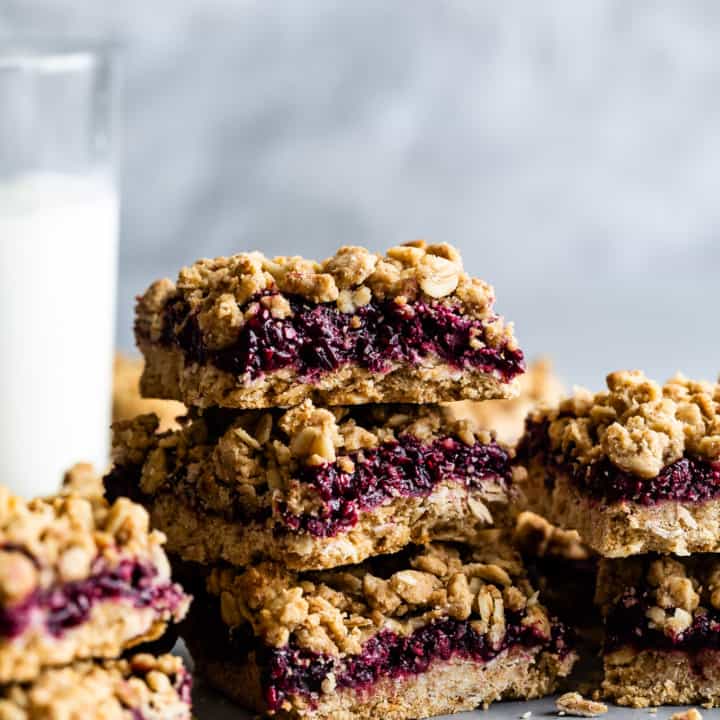