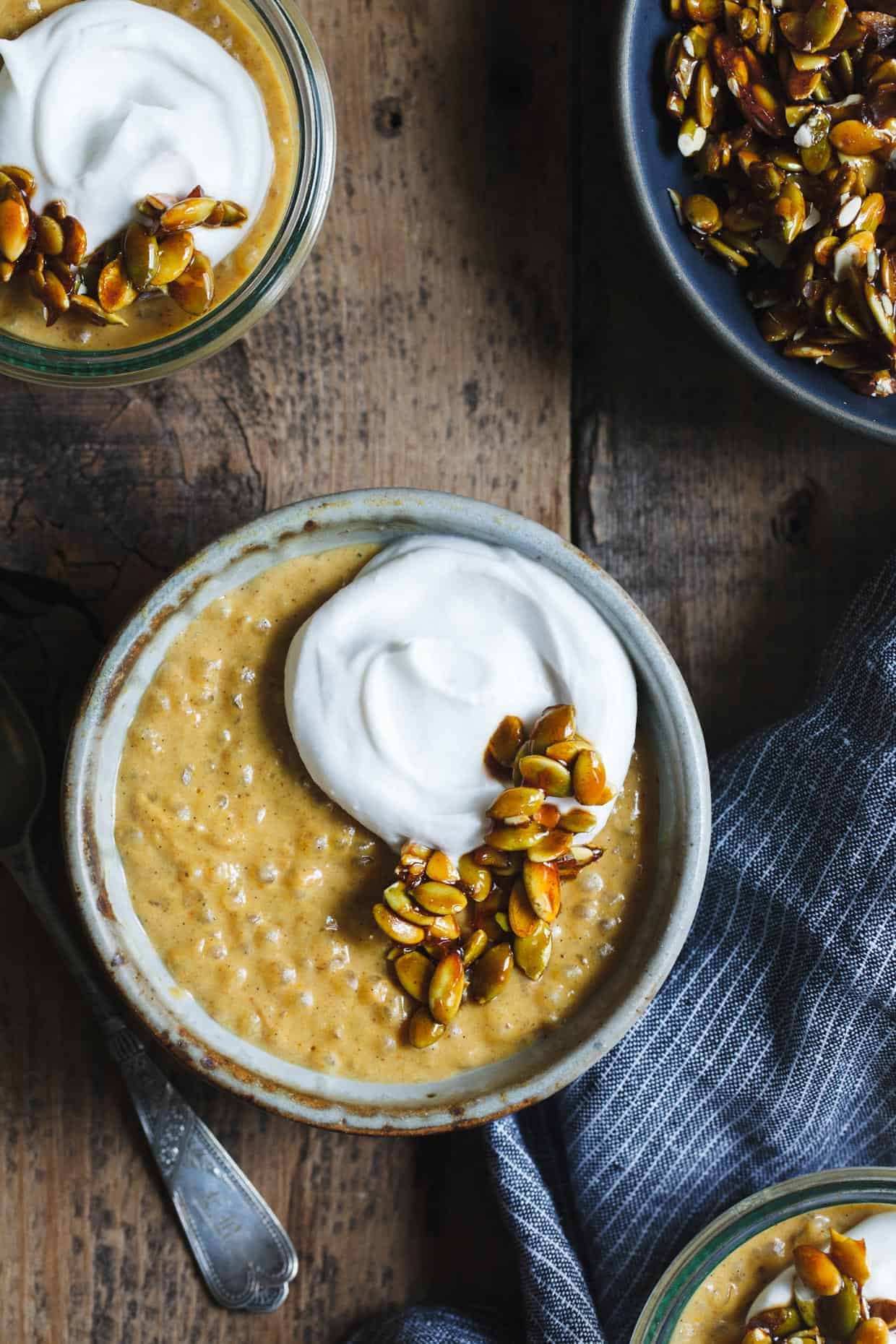 A bowl of this spiced pumpkin tapioca pudding is curing all my ails right now. We just tossed our first family cold around - a right of passage I've been told. Zoella got sick early last week, capped off with a 103°F temperature. She wanted to do nothing but nurse in bed all day while shoving her snotty fingers in my mouth and valiantly fought it off in a day.

Naturally I caught it next and also wanted to do nothing but lay in bed, but by that time Zoella was on the mend and ready for entertainment. My mom comforted me with, "moms don't get to be sick." Noted. Sniffle. I'm on day 3 of "not" being sick. 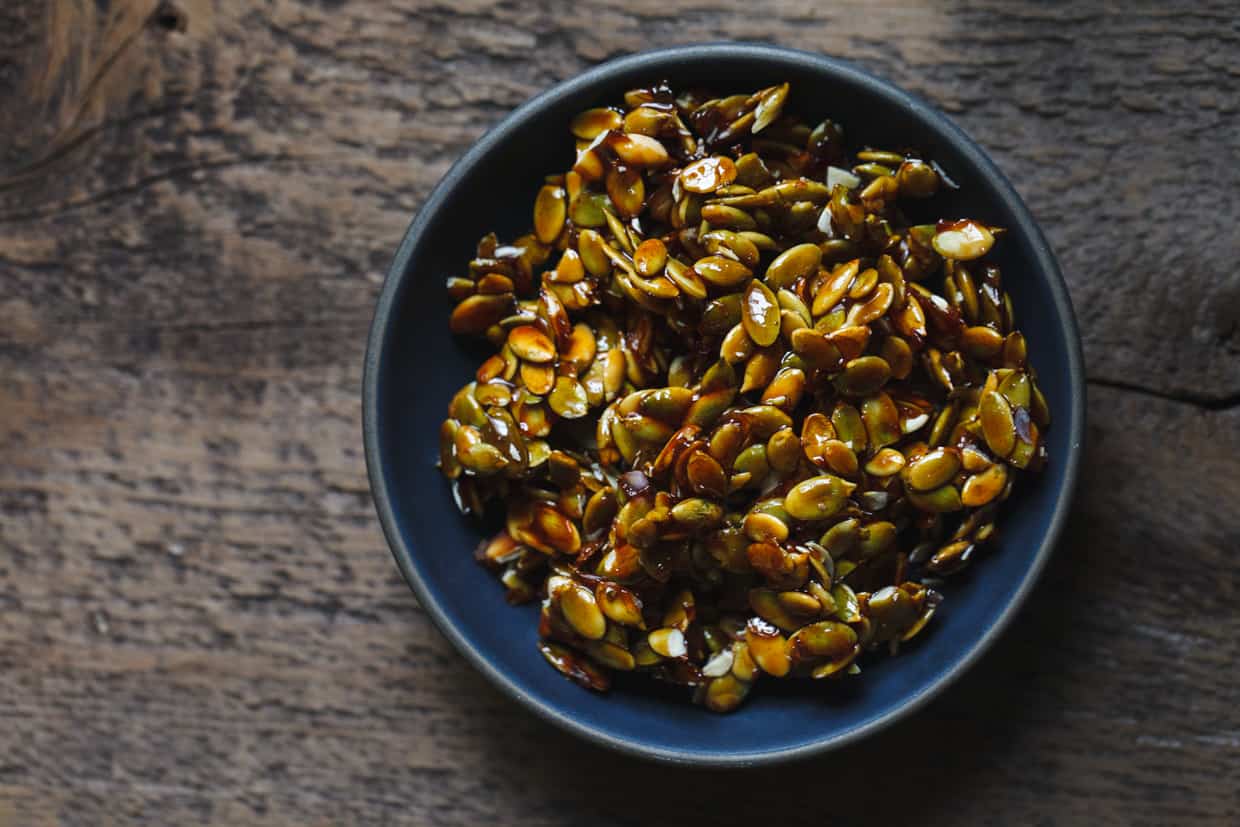 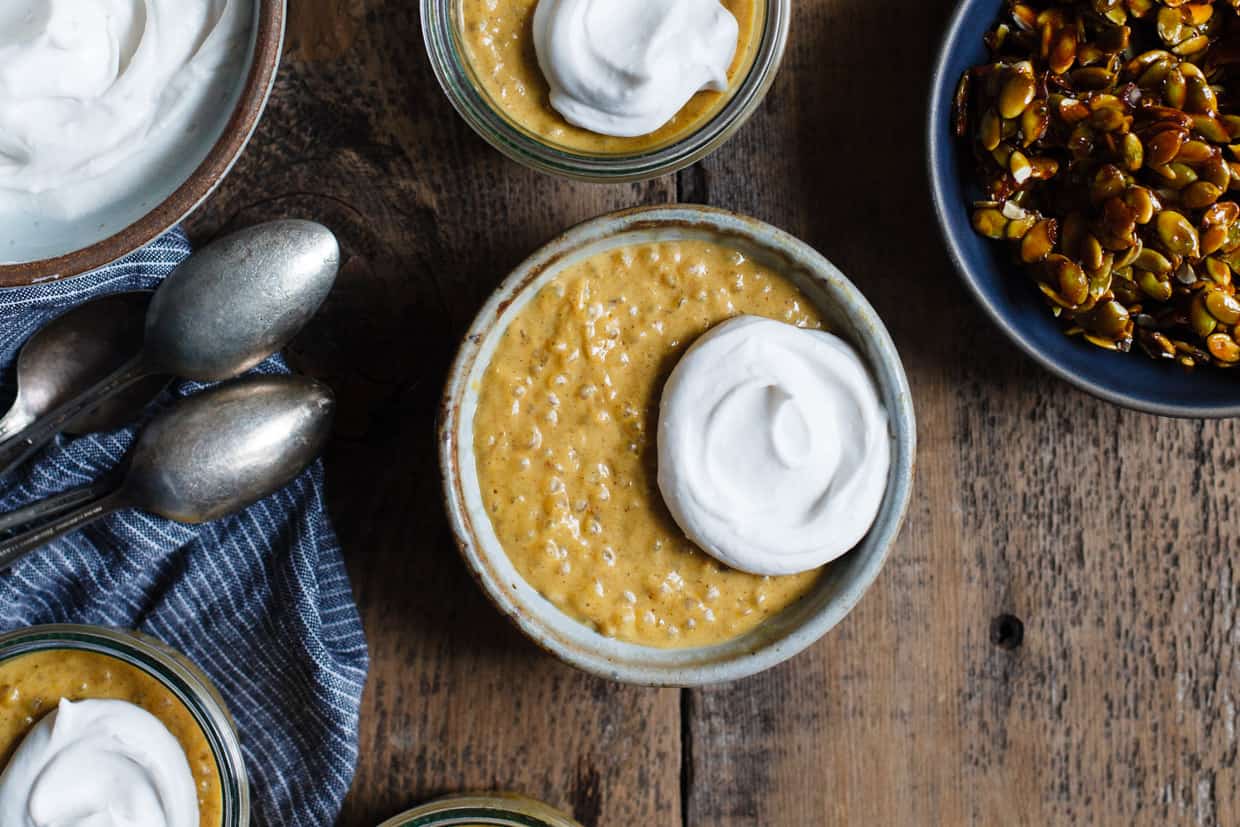 To add insult to injury, every single ceramic bowl in this post leaped out of the cabinet to a shattering death this week and I'm having trouble letting go. The broken pieces are still sitting on my dining table like a pottery graveyard.

A moment of silence for the ceramic collection that once was. 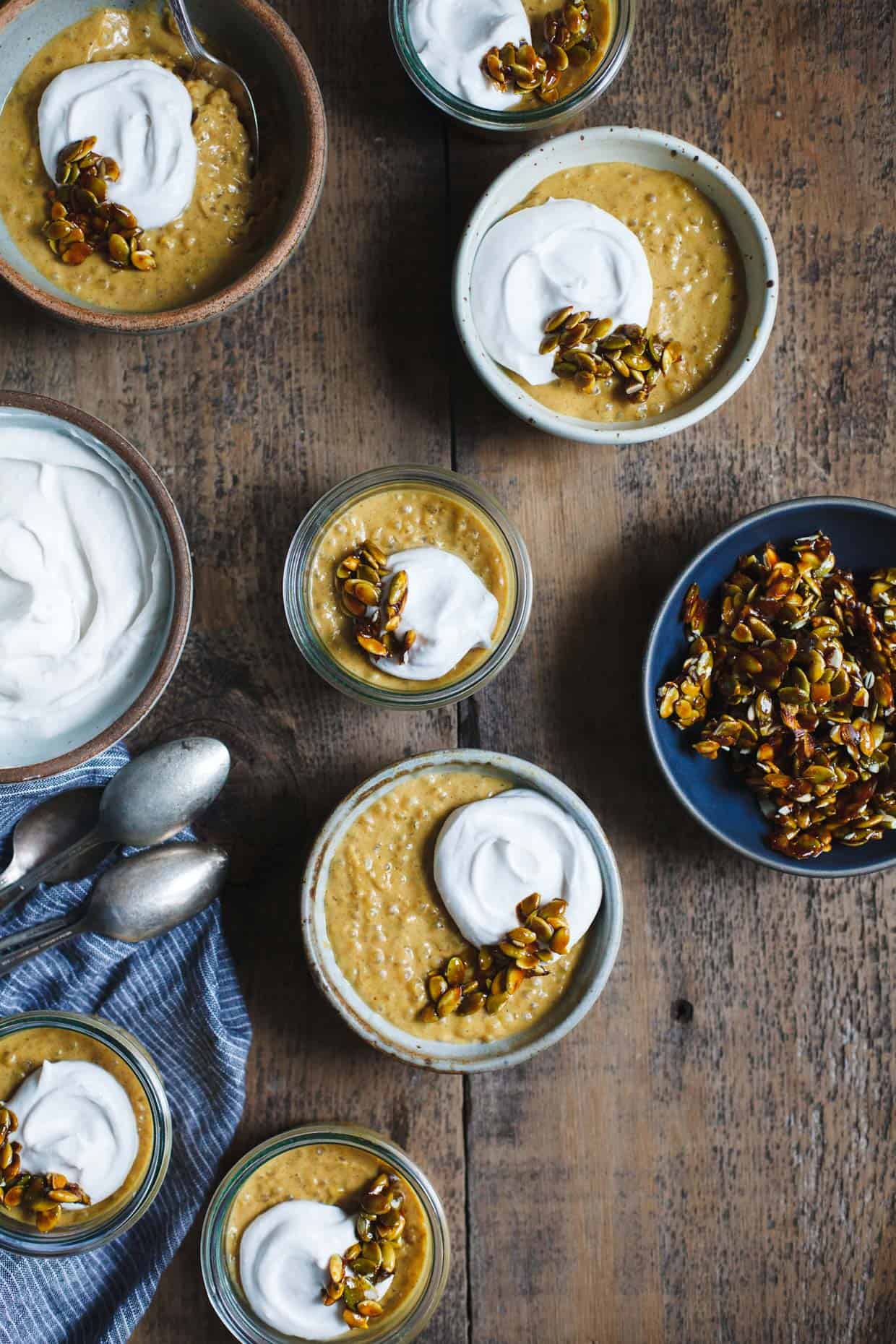 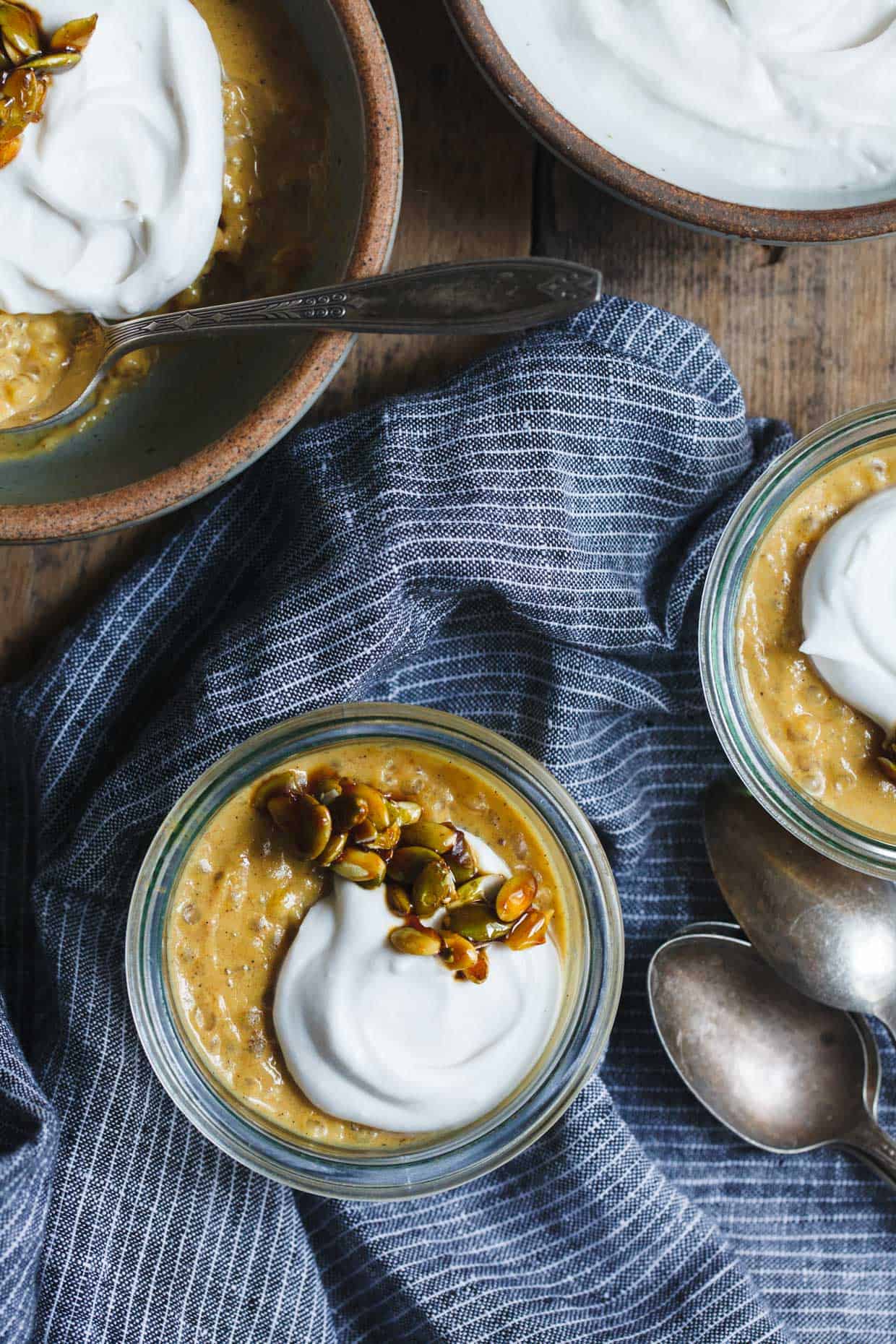 What is it about head colds that gives you an overwhelming need to feel cozy? Like sitting next to a wood stove bundled in a blanket with a cup of hot apple cider and the scent of spiced pumpkin wafting through the air is the magic cure for the sniffles. I want all that right now.

With a third batch of this pumpkin tapioca pudding on the stove and the aroma of cinnamon, ginger, cloves, and nutmeg filling the house, I already feel a bit better. Maybe if I light the votive display in our fireplace, I'll be that much closer to clear sinuses. 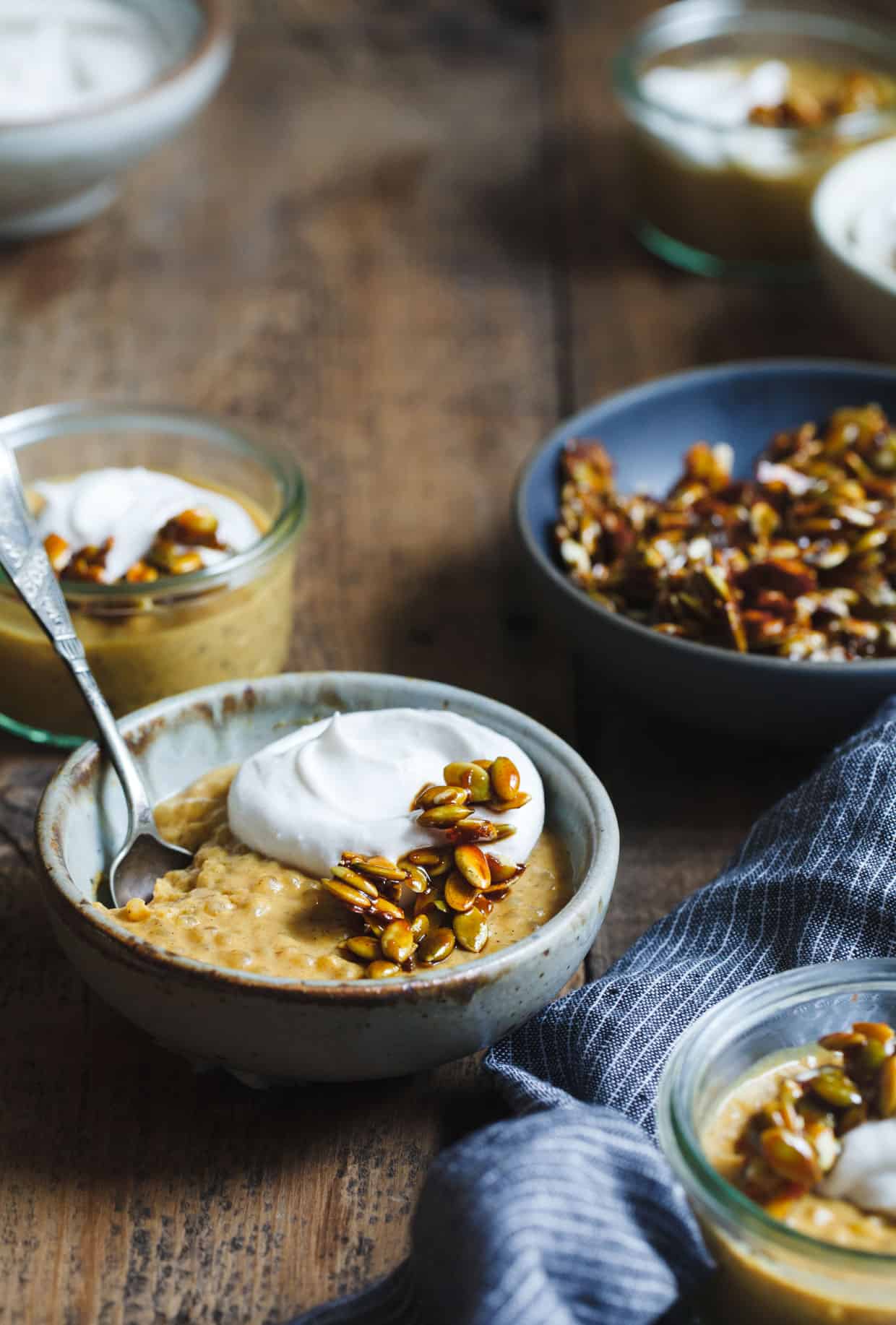 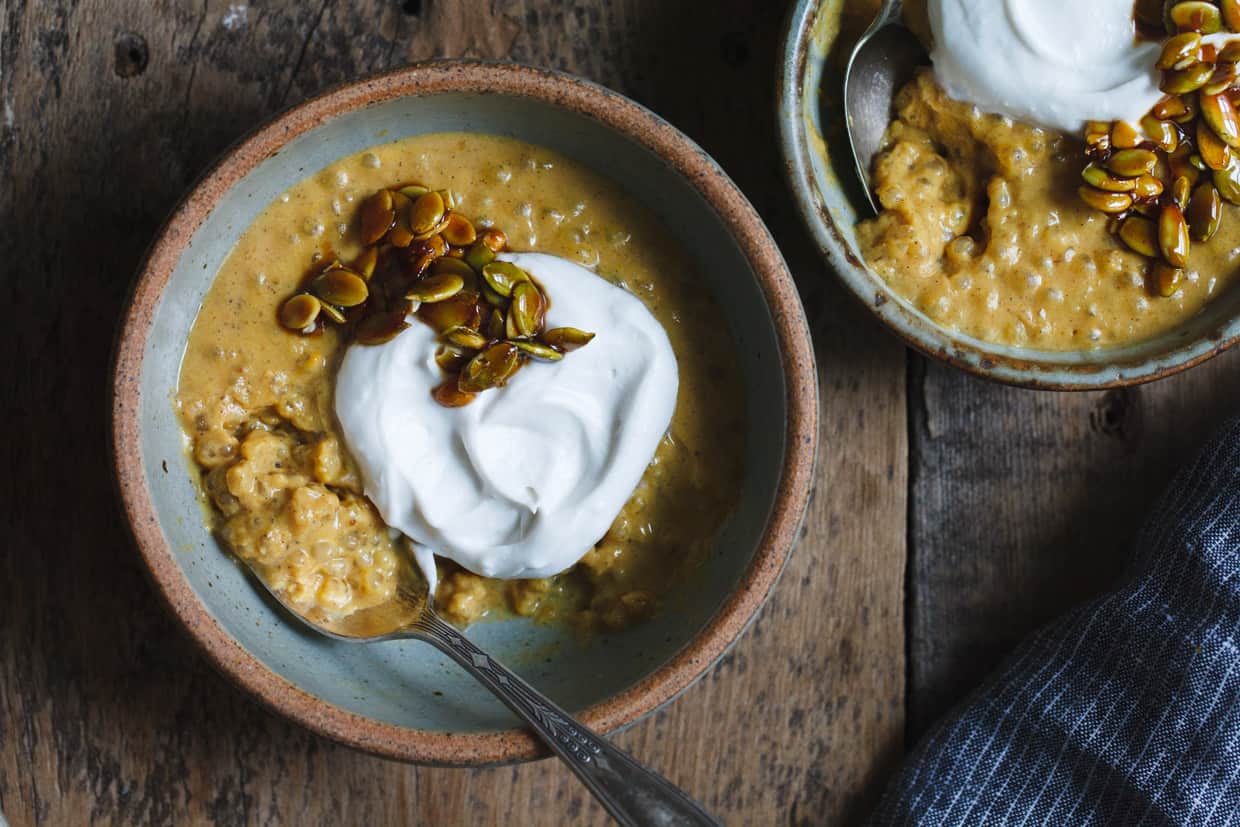 This pumpkin tapioca pudding is the stuff fall dreams are made of - pumpkin and spice and everything nice. It's ultra creamy with little chewy bubbles that make each bite addicting in flavor and texture (this is in stark contrast to my kid self who hated tapioca pudding because seriously wtf are those little bubbles?). The pudding idea came courtesy of Carla during one of our weekly boba dates. Tapioca pudding is like tiny boba in dessert form and I'm obsessed with both.

A dollop of whipped coconut cream dances on top of the spiced pumpkin tapioca pudding with crunchy candied pumpkin seeds. It's feeling mighty cozy around here. 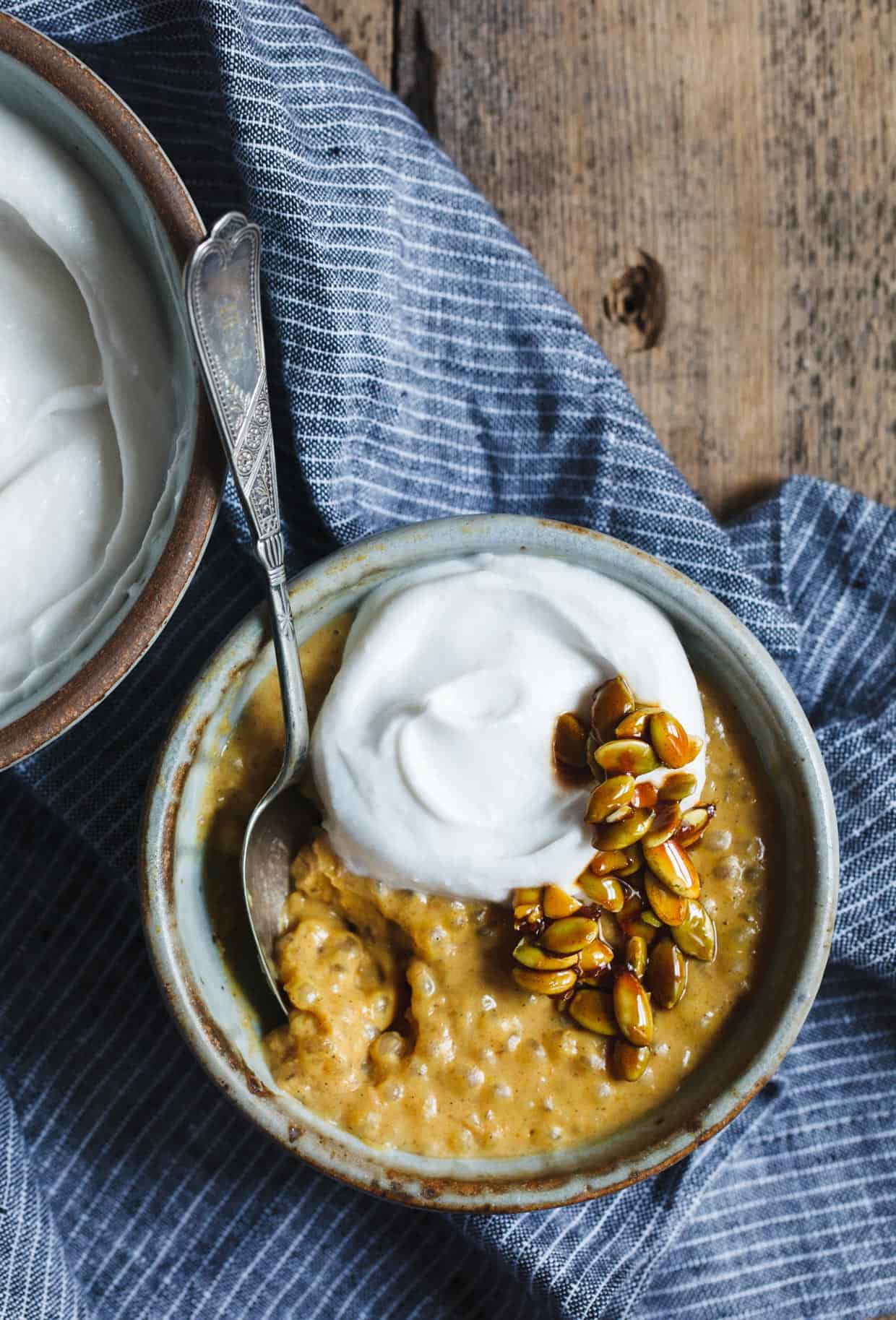 If, like me, you can't get enough pumpkin pudding, Alanna's got you covered with her butterscotch pumpkin pudding. ALSO ALSO: IT'S A PUMPKIN PARTY!! Over a hundred pumpkin recipes are flooding the internet today to celebrate - head over to Cake Over Steak and Twigg Studios for the epic list!

*If you can't find coconut cream (I use either Thai Kitchen Coconut Cream or the kind from Trader Joes), you can use the thick cream off the top of a can of full-fat coconut milk. If you don't have time to chill the coconut cream, you can also substitute ¾ cup heavy whipping cream.