Spring green matcha macarons filled with mango buttercream. These French macarons have a crispy shell with a chewy center and an earthy matcha flavor that complements the almond flour base. The filling balances the flavors with a tart buttercream made with ground freeze-dried mangoes. 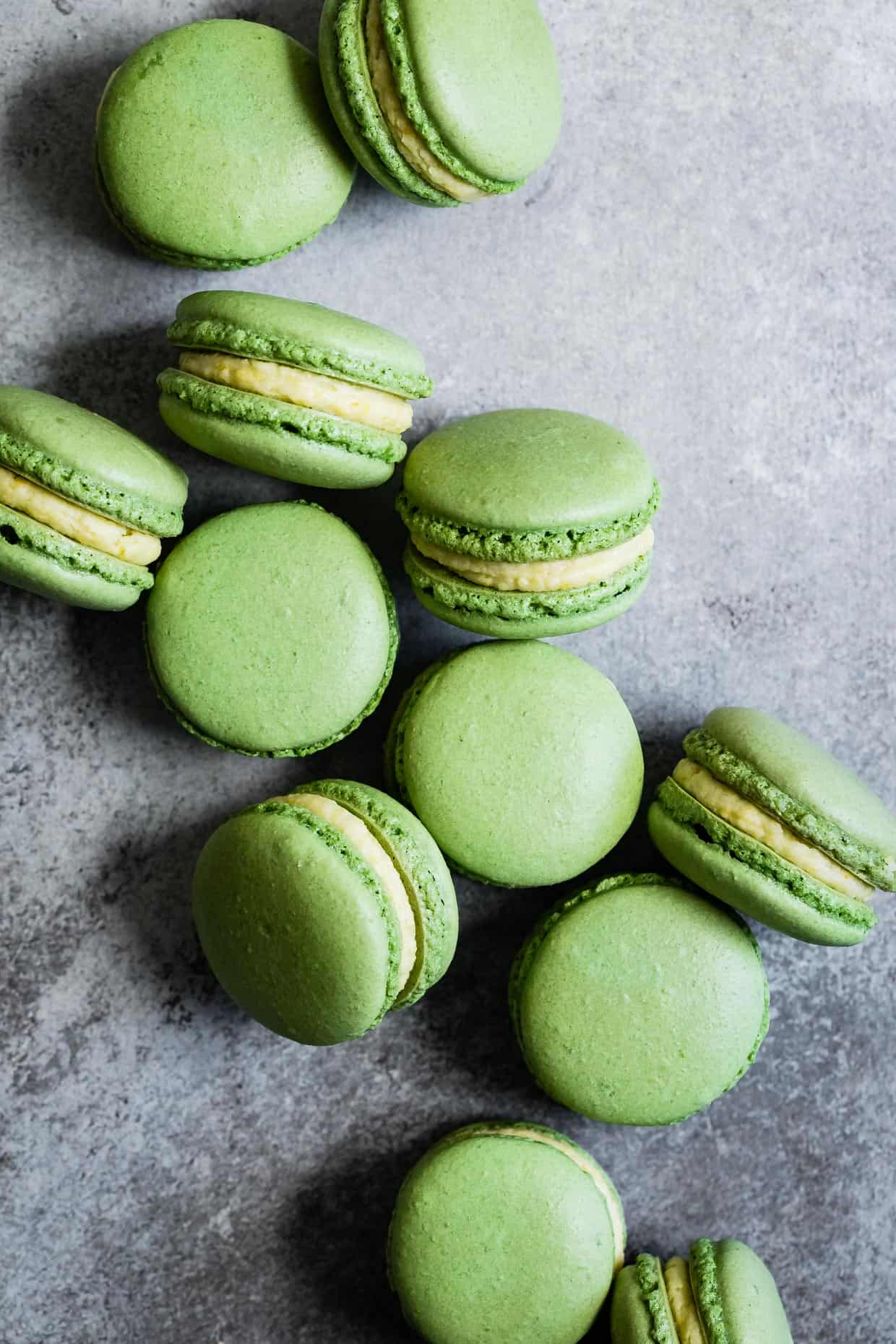 Our first night in Paris this past November, we had one must-do on our agenda: find macarons. By the time we did, it was about 10 minutes before closing and way past toddler bedtime. Zoella had gone a full day in Paris without eating a single thing save for the apple sauce we packed for emergencies. Picky eaters take it to a whole new level in a foreign country. She wanted nothing to do with any food we offered her, but a random stranger behind the counter offering her a free macaron? No hesitation at all. Up until this moment, this kid had never eaten a cookie or really much of any sugar, yet somehow she knew those colorful little morsels under the glass were special.

Made with just almond flour, macarons are naturally gluten-free, making them my go-to Paris treat. This recipe for matcha macarons with mango buttercream is the second in my year-long partnership with Bob’s Red Mill. First we ate chamomile oat waffles and now I'm busting into the almond flour to perfect one of my favorite sweets. I also incorporated matcha because it's still Matcha March, lest we forget! 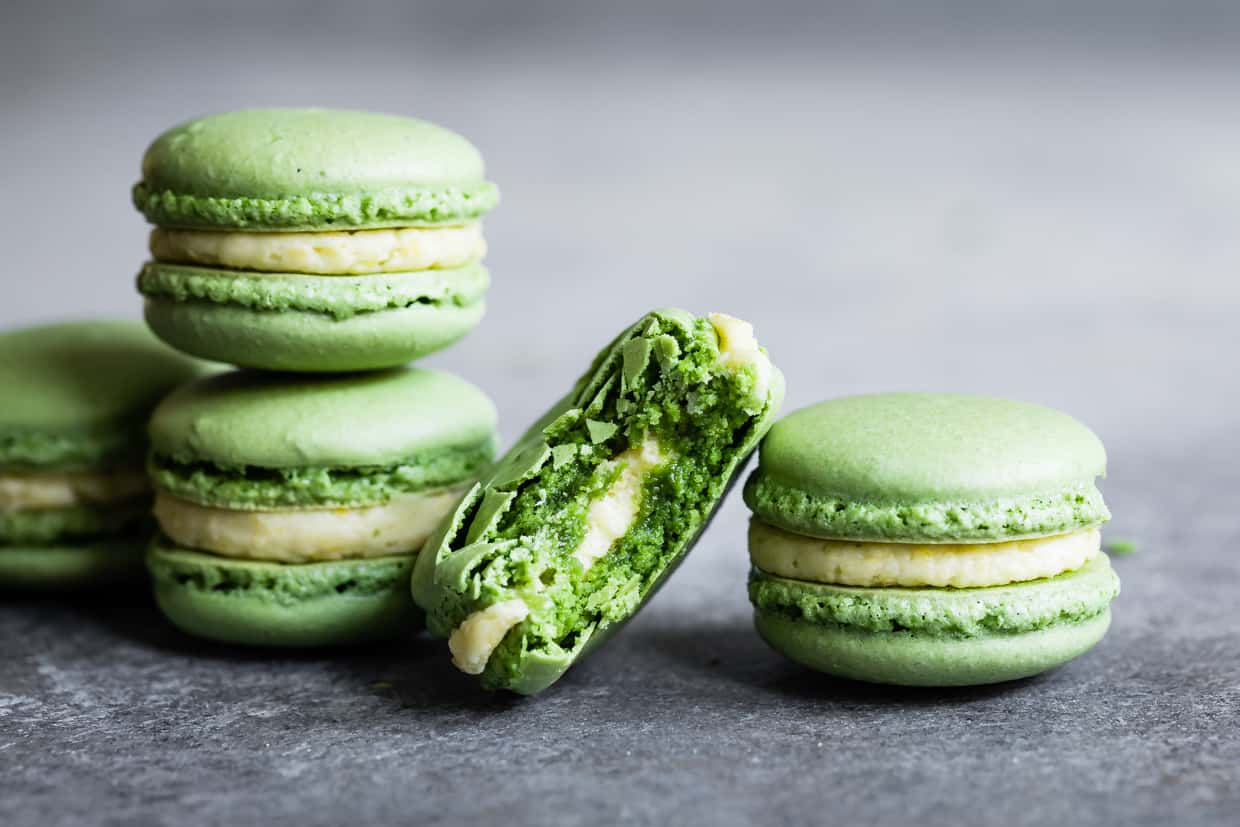 In the past month I've used over 2 dozen egg whites and 3lbs of almond flour just on macarons. I've been afraid of and avoiding making macarons ever since my friend Lisa and I first tried our hand at macarons several years ago and failed. See how quickly I threw in the towel? Sometimes good things take time and practice though - I've been working on reminding myself of this now that I've got a toddler who gets frustrated at the first sign of struggle.

We got Zoella a wooden balance bike for her birthday. At her party, in front of her friends and family, she climbed right up and then just as quickly toppled right over. She was embarrassed and done. We clearly underestimated the skill required to balance a bike.

The next day, we asked if she wanted to take her new bike out for a ride. She picked up the new bike and said, "Daddy, fix it! It not working." We're still trying to convince her that it takes practice and she'll figure it out eventually.

Is it difficult to make macarons?

So, I pulled out the almond flour and egg whites and decided I should heed my own advice in the face of pesky macarons. I kept failing, but kept trying, researching, and watching baking Youtube videos. In one week, I made eleven batches of macarons. It took 5 batches to get edible macarons I was proud of - evenly round without cracks, tall feet with a crispy shell, and a perfectly chewy center. The next few batches were my attempts at testing and honing the recipe. Hopefully these tips on what I've learned along the way will shorten your learning curve.

That being said, I think the biggest take-away I learned is that, regardless of how much research you do, how many recipes you read,and how many videos you watch, so much of perfecting macarons is experiencing what the final texture for the egg whites and the macaronage should look like. It's subtle. So expect to use a few egg whites (save the yolks for these hibiscus strawberry curd tarts!) and possibly even throw away a batch or two in the learning process. The great part is, macaron shells really don't require all that much time and the reward is oh-so-worth the effort of practice. 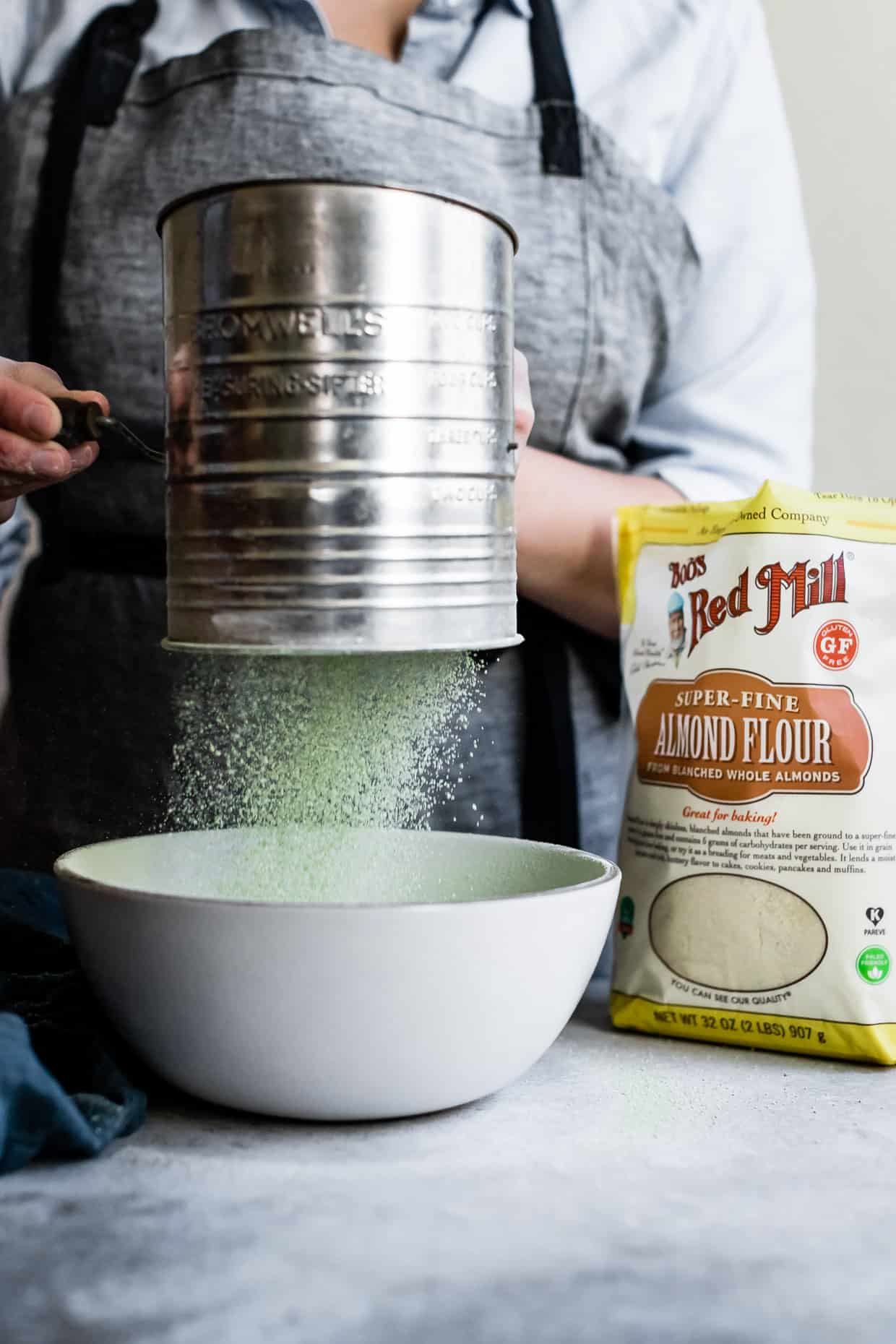 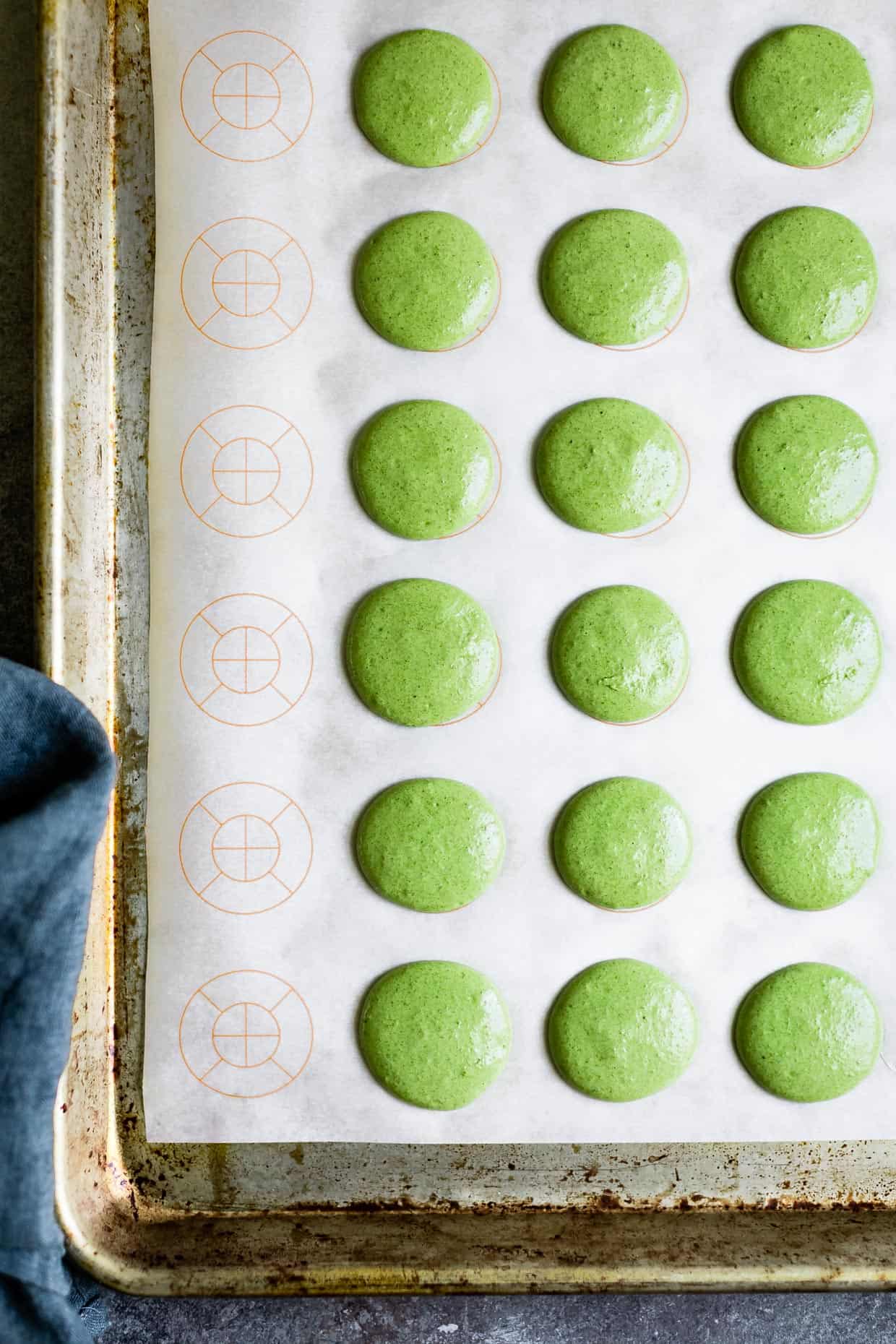 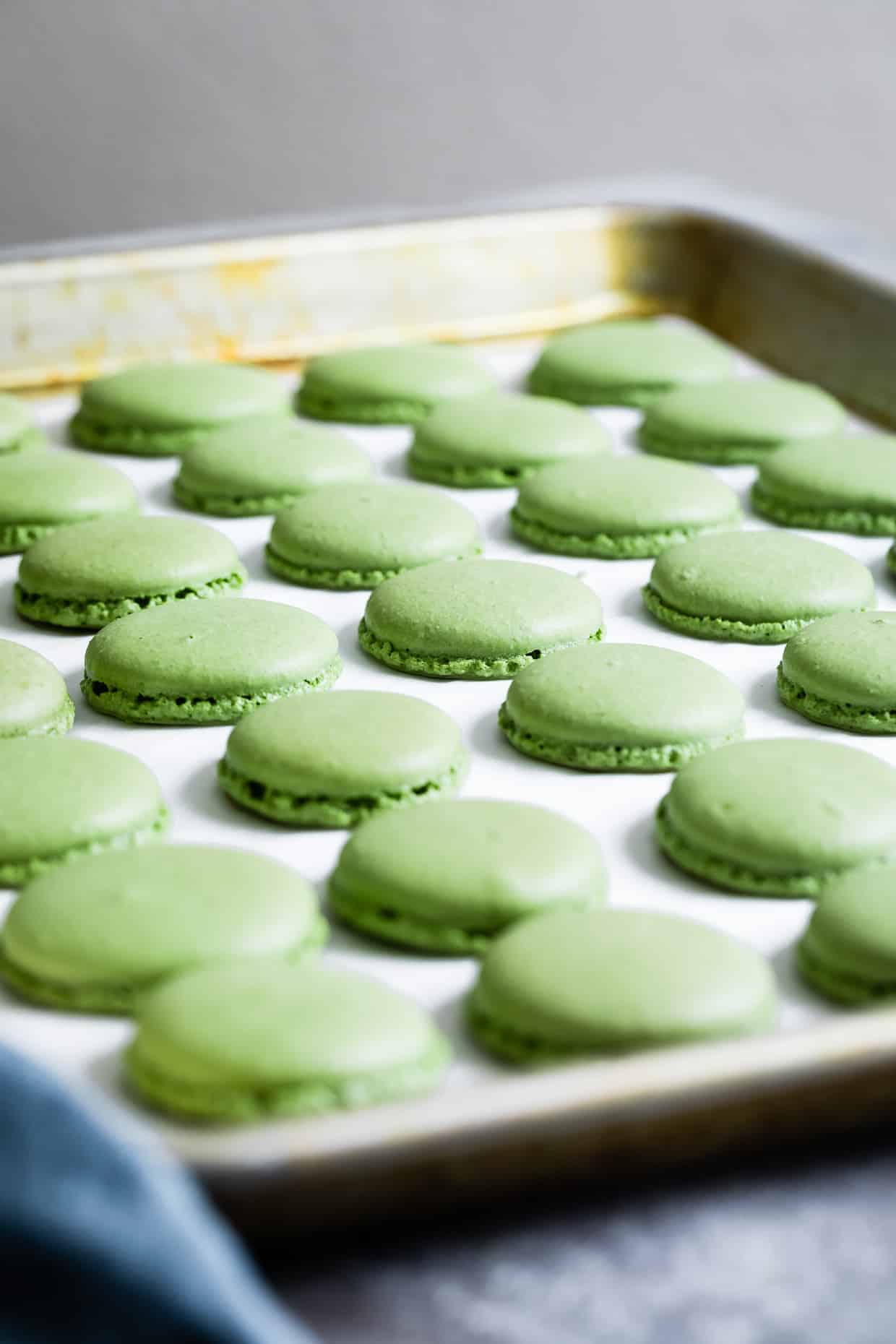 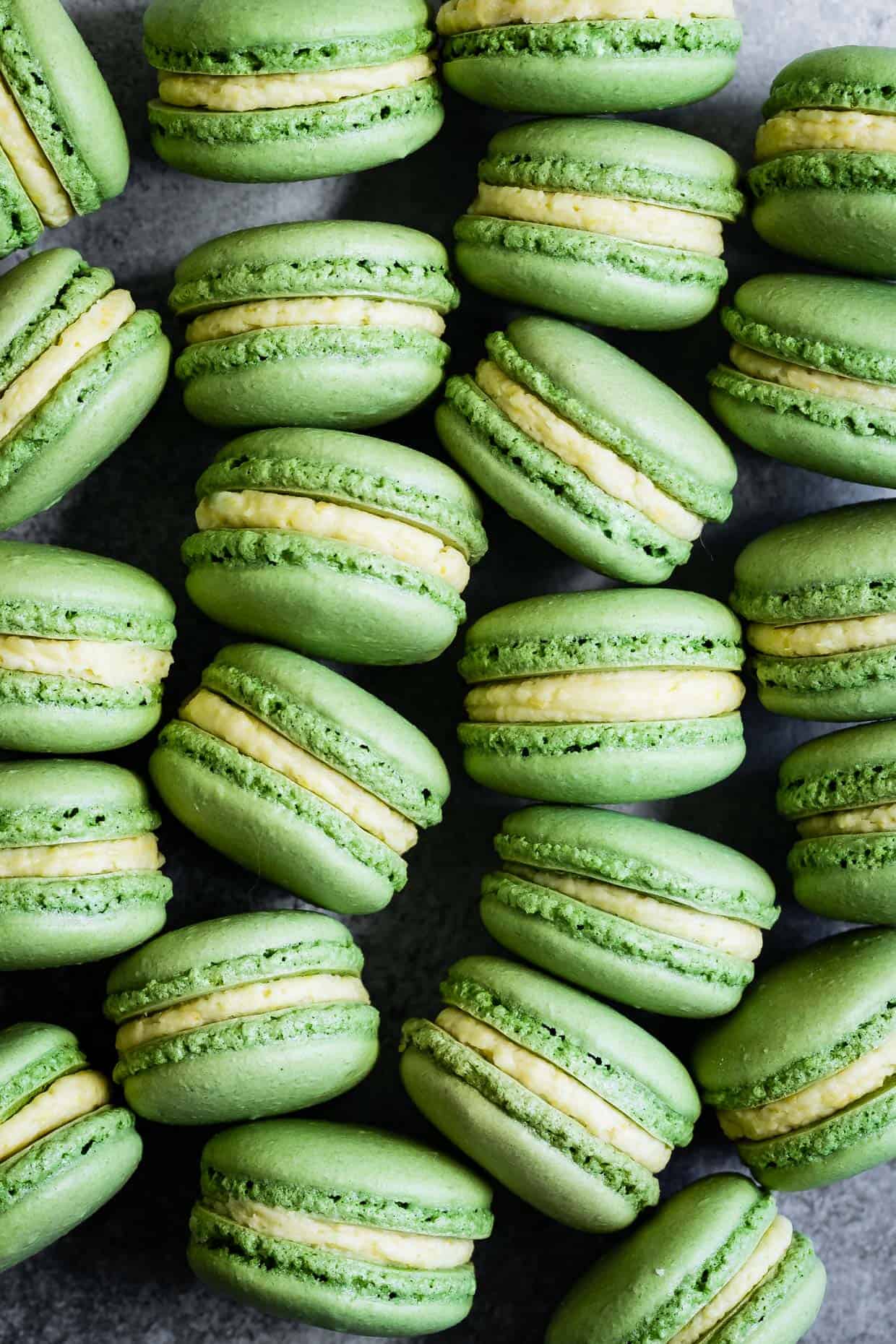 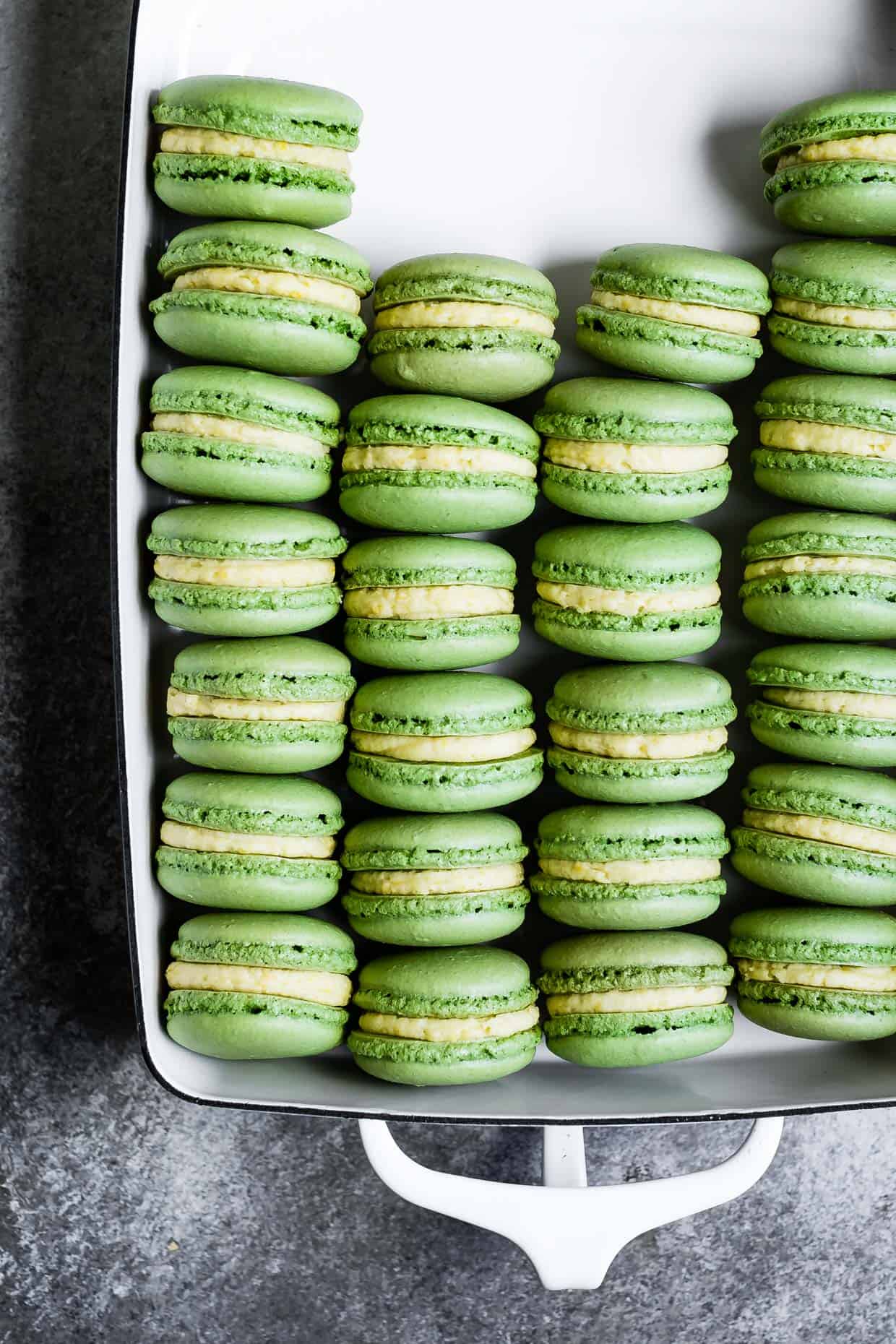 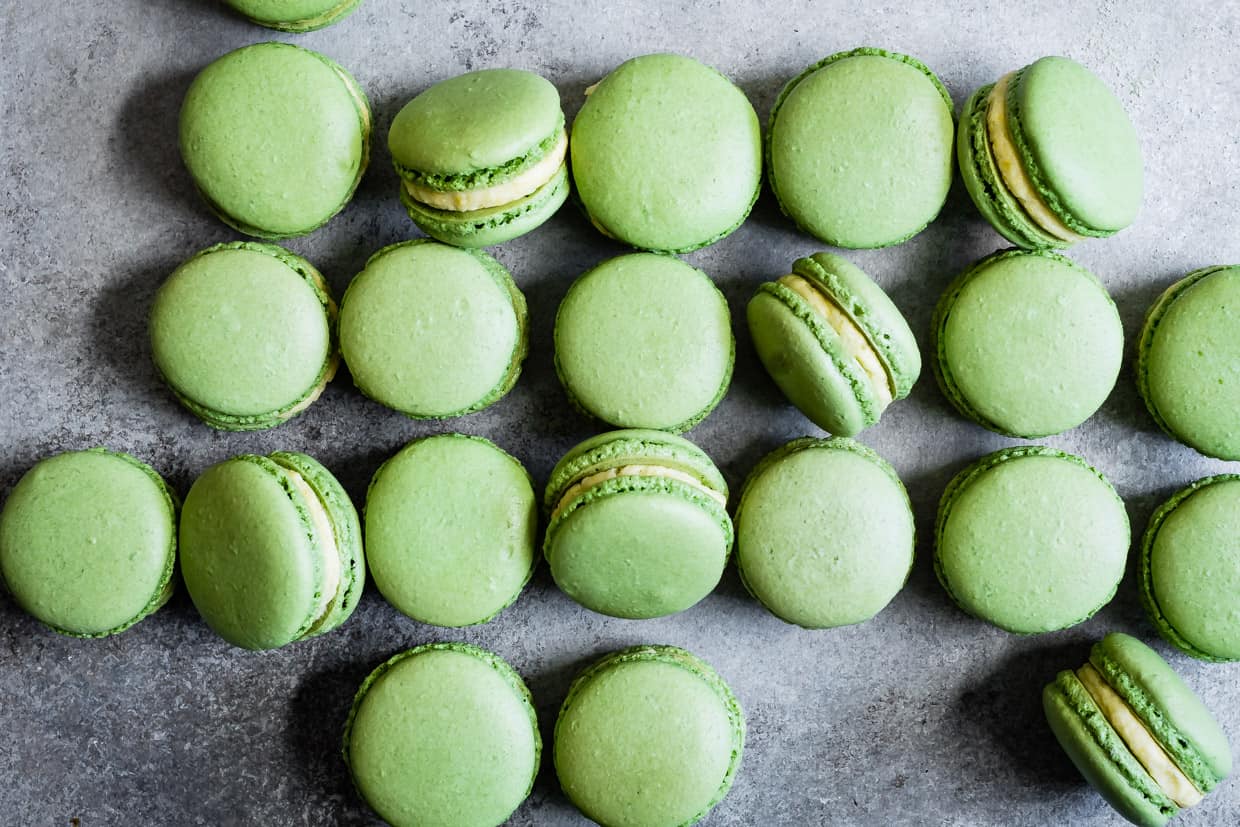 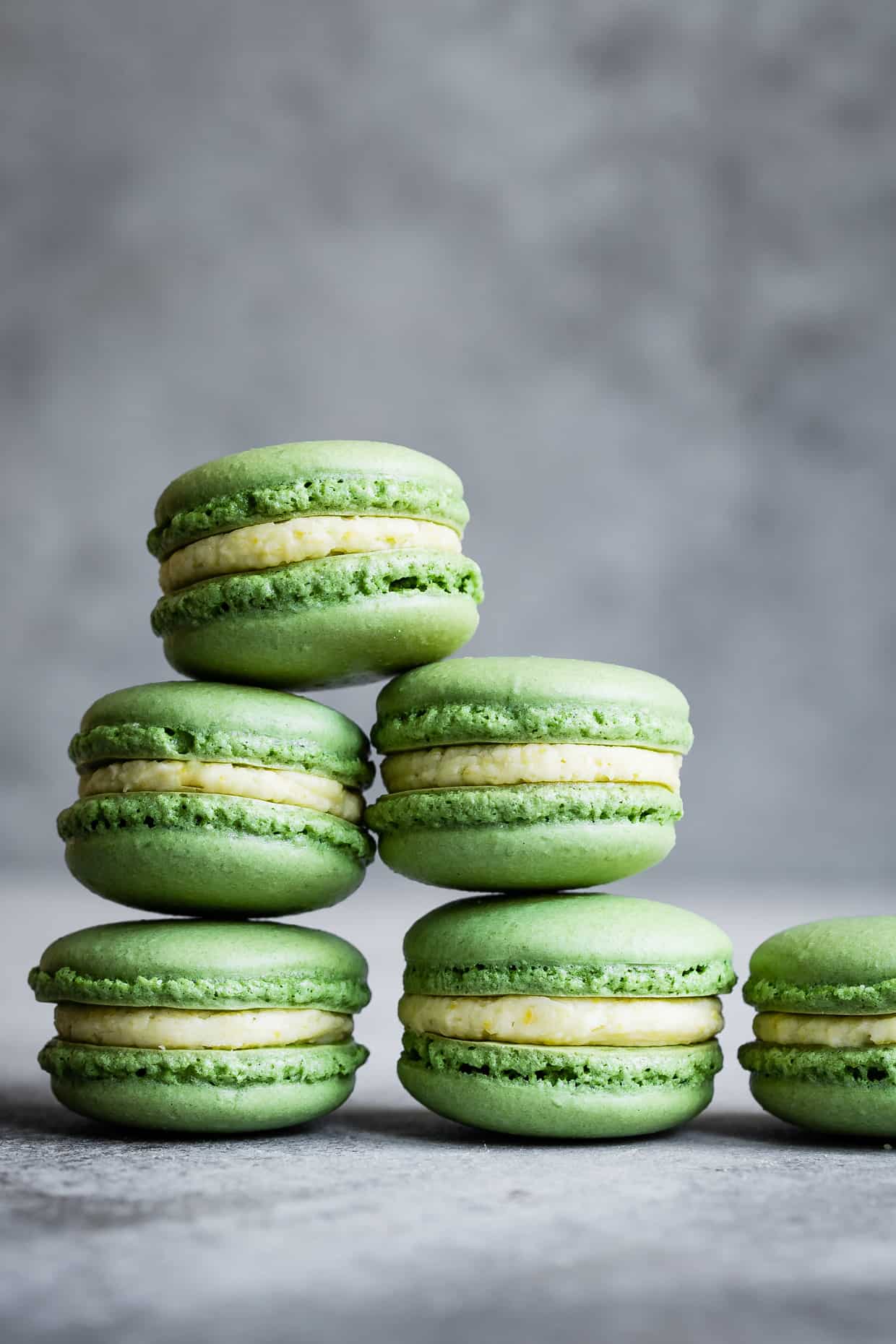 Decide on a method

What I didn't realize before I started researching macarons is that there are three main methods to making macarons that have to do with making the meringue: French, Swiss, and Italian. In the French meringue method, sugar gets added to the egg whites while beating - no heat is applied. In the Swiss meringue method, the sugar and egg whites get whisked over a double broiler until the sugar dissolves, then transferred to the stand mixer to beat to stiff peaks (to see the Swiss method in action, my friend Sarah has perfected it!). In the Italian meringue method: sugar and water get cooked together then slowly added while the egg whites are beating.

In my research, some folks suggest the Swiss and Italian method help to stabilize the egg whites, making them a bit easier for beginners to master. In practice, I did not find this to be true and had much better and faster luck with the French meringue method. Plus, no heat means an easier process and less clean-up! That's the method I used here.

I've included cup measurements below so you have an idea of how much flour you're looking for, but for a recipe as finicky as macarons, I would recommend weighing your ingredients (including your egg whites).

Beat the egg whites until very stiff, but not overly dry

I used only eggs that were at room temperature (that I would soak in warm water for 10 minutes to make room temperature because patience is not my strength). I also found no difference in the outcomes of old to new eggs. You want the egg whites to be stiff and glossy to the point where the egg whites clump in the beater, but you don't want to over beat them until they look dry instead of shiny.

Honestly, different recipes will tell you all kinds of different things here, but I found I was more likely to fail if I under beat the egg whites than if I over beat them. For the under beaten egg whites, the macarons never set to a hard shell and I had to trash them.

Start with a super-fine almond flour like Bob's Red Mill to make sure your macarons are smooth after baking. Honestly, I have no idea what sifting them twice does, but when I sifted them once, my macarons were less likely to turn out perfect. My best guess is that you don't want to over beat your macaron batter after adding the dry ingredients but you also don't want clumps of flour. So it's important to start with extra sifted flour and powdered sugar so you don't have to over beat to get the clumps out.

It's all about the texture of the batter - the macaronage

This is where success comes in - once I experienced what the batter should look like, I had beautiful macarons every time. This is the step that I describe as requiring a few tries to get it perfect - if you vary nothing else in your process in the quest for macarons, this is where you should focus. First, combine your dry ingredients and egg whites by hand with a rubber spatula. Use a circular motion around the bowl and then cut the wide side of the spatula through the center, pressing batter against the edge of the bowl to knock the air out of the batter.

Most recipes describe the texture as molten lava, which I find only partially helpful because I've never actually seen molten lava. Others suggest that you should be able to lift your spatula up and make a figure-8 with the batter running off the spoon without the batter breaking into big clumps. This is also true, but if you over beat the batter, your macarons will fail. If it's too smooth and creates a figure-8 too easily, then it's possible you over beat the batter. I found that if I took a spoonful of batter and put it onto the baking sheet, it should initially hold its shape for 5-8 seconds, but after 20-30 seconds, it should soften to an almost smooth top (a subtle little "tip" is even good to show you did not over  beat - here's a video to show what it should look like).

I've found that it's better to err on the side of under beaten - when I over beat the macaron batter, I would not get the crisp shell, and instead the macarons would be almost greasy looking and completely soft. Inedible. When you under beat, you run the risk of macarons that crack or have large air pockets, but, they'll at least still be edible. When your batter is ready, put the batter into a piping bag. If your batter oozes out of your pastry bag into a smooth plop almost immediately, you've mixed too far. If your batter completely holds its shape when you pipe your macarons, you haven't mixed enough.

Dry your macarons out for 20-30 minutes on the counter until they are dry to the touch (this time will vary depending on the humidity). This will help prevent your macarons from bursting and also will help them develop the classic foot.

Some recipes say to cook the macarons at higher temperature, but when I tried that, they rose too quickly and either burst or were completely hollow. I had better success when I cooked the macarons at 300°F for 13-16 minutes. When you gently shake your baking pan in the oven, the macaron tops should not slide or jiggle at all when they're finished baking. If you try to lift a macaron off the parchment paper and the top peels off, leaving the centers behind, they're not done baking. On that note, make sure you have an accurate oven thermometer to make sure that any failures are not simply due to a fluctuating cranky oven!

Ripen your macarons - A little hollow on top is okay

If your shells have a nice chewy center and a crisp shell, but a small hollow space between the center and the top of the shell, don't be too alarmed. Once you add filling and ripen the macarons in the fridge for 1-3 days, that hollow top should almost disappear. 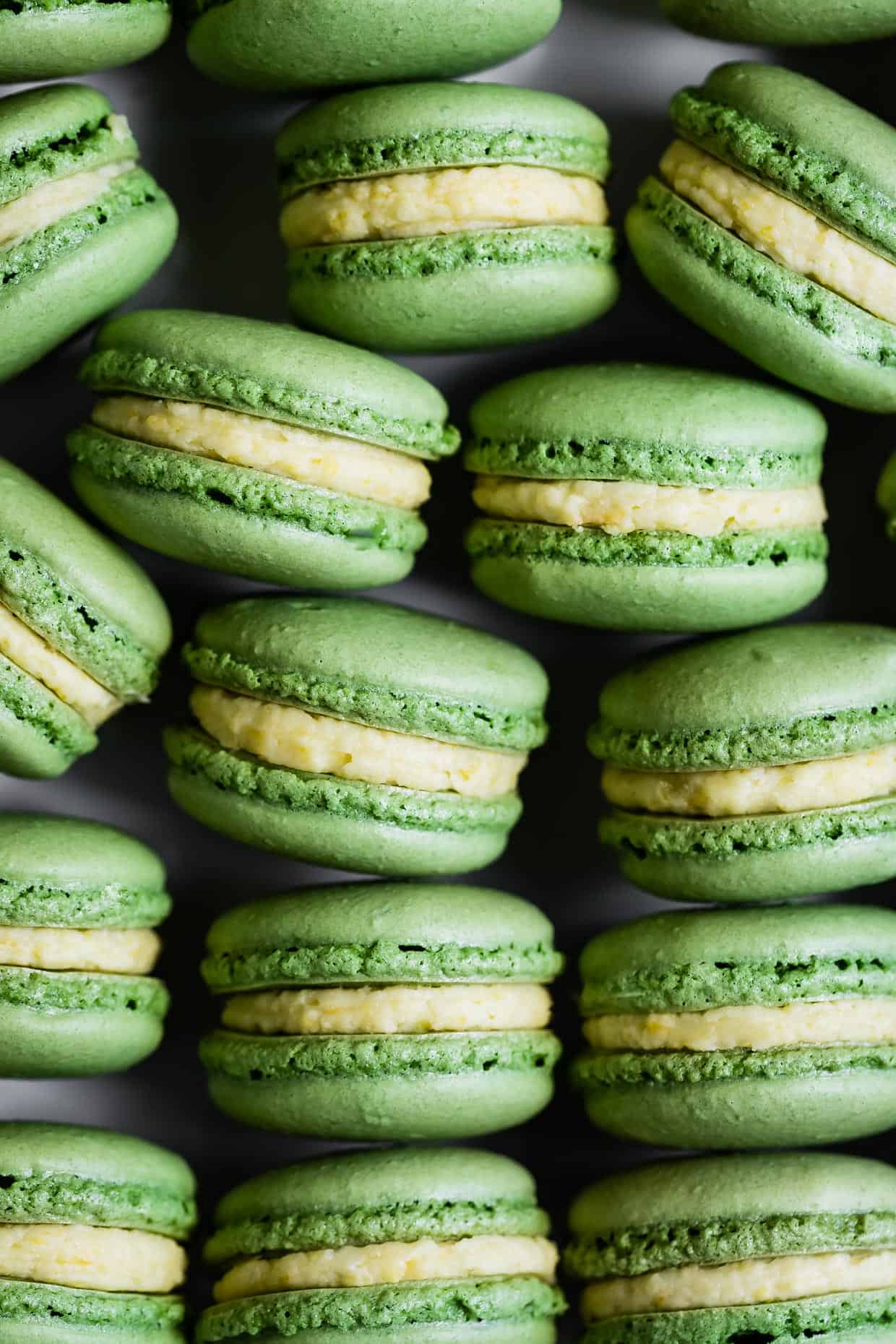 Disclosure: Special thanks to Bob’s Red Mill for providing the flours shown above and sponsoring this post! And thanks to you for supporting the companies that keep Snixy Kitchen cooking