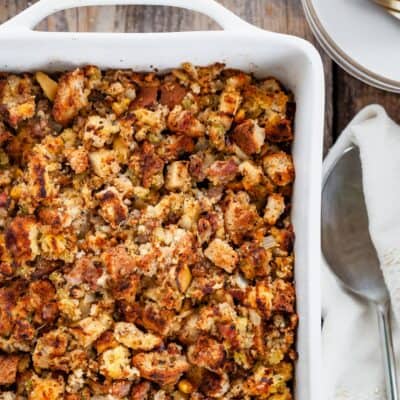 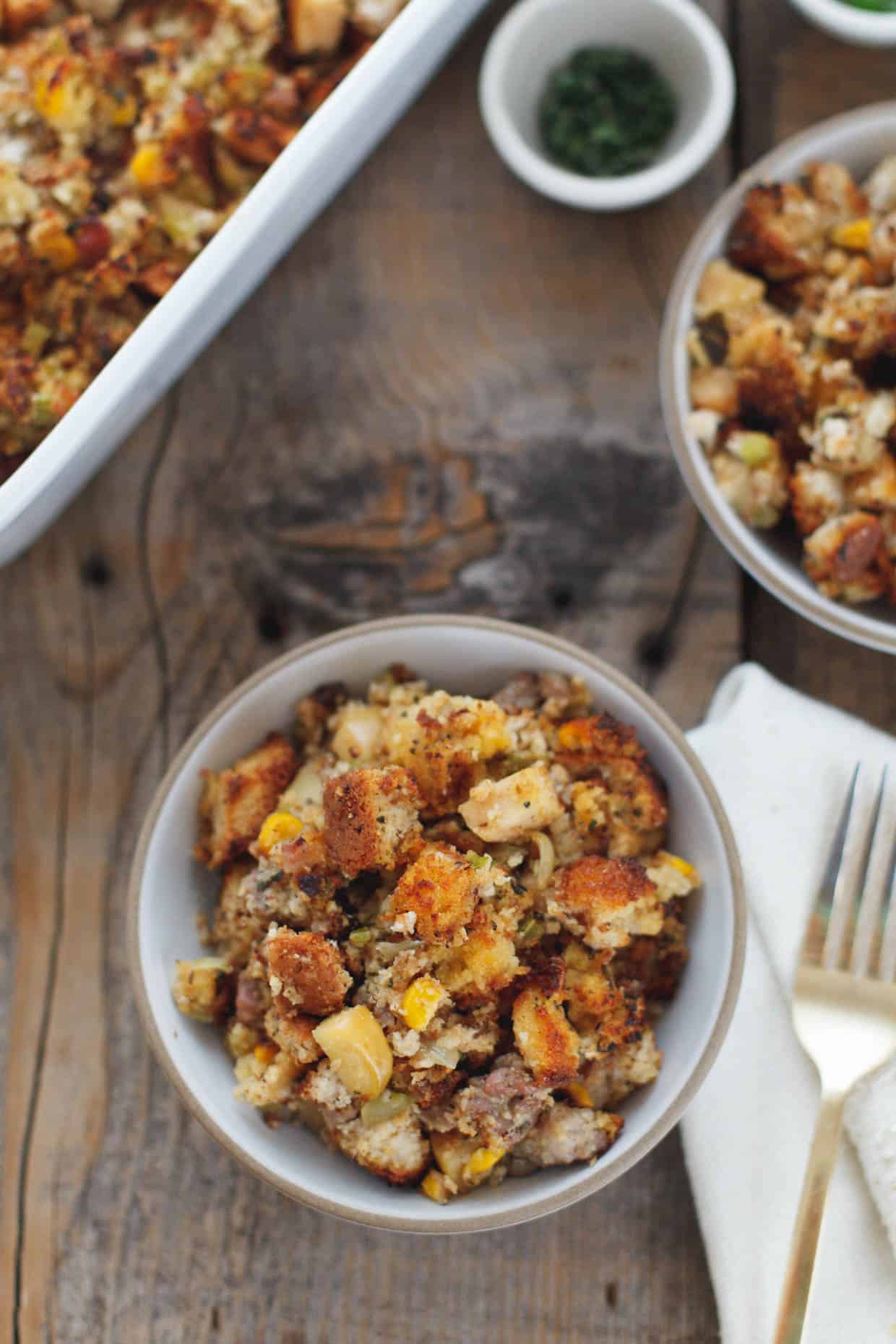 With homemade cornbread, sausage, and apples, this gluten-free cornbread stuffing is the only stuffing recipe you'll need. It's loaded with fresh herbs and packed with flavor. Plus you can make it in advance! 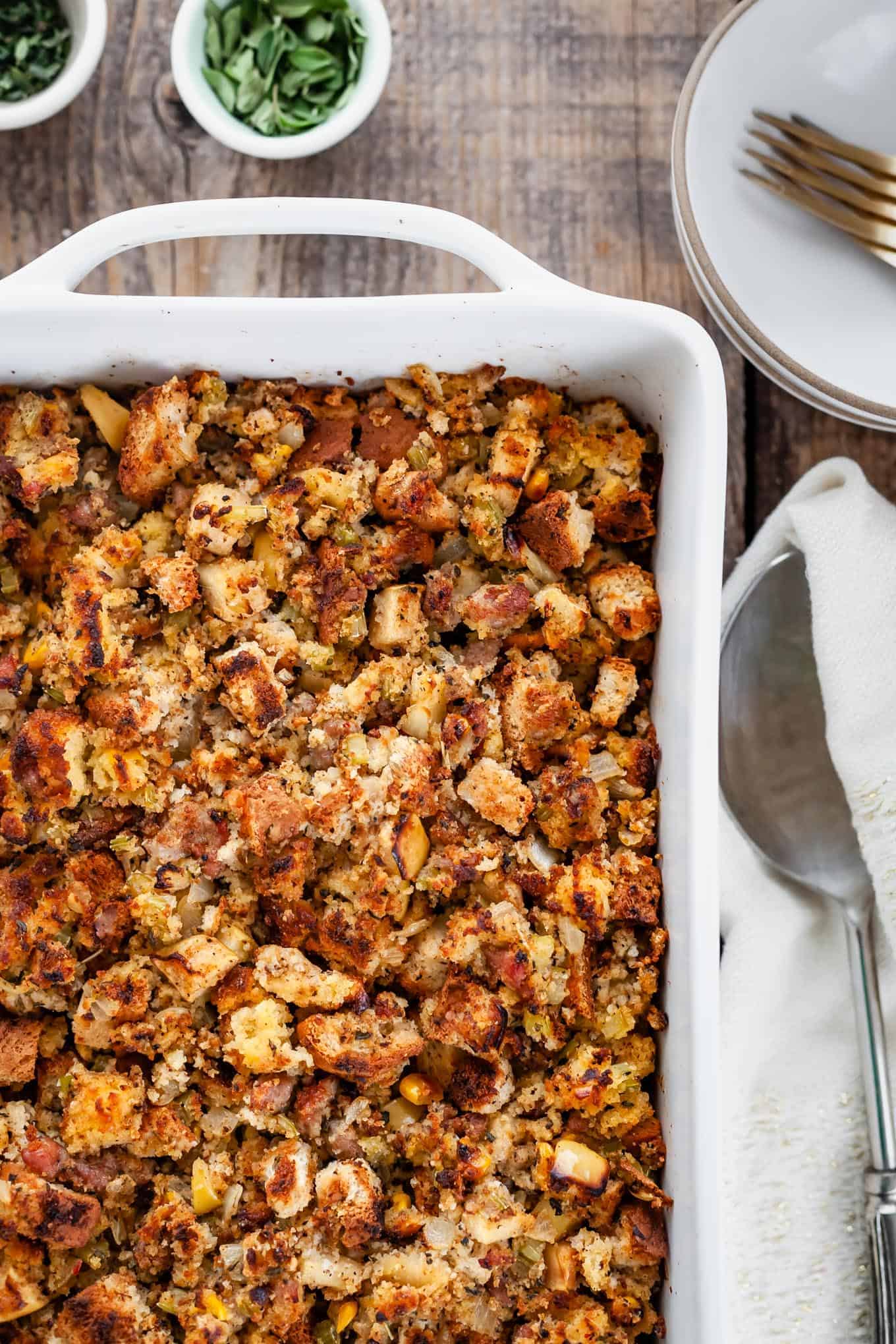 This recipe was originally posted November 17th, 2014 and has since been updated.

There are things you take for granted when you live with your parents that slap you in the face as soon as you're on your own. Subtle but more vital things than laundry or dishes.

Things like changing the oil in your car, for example. How are you supposed to know that your dad's been changing your oil all these years? Hopefully not by your car overheating and your radiator cracking during your first year in college like me.

Or things like how much liquid to put into homemade gluten-free cornbread stuffing. 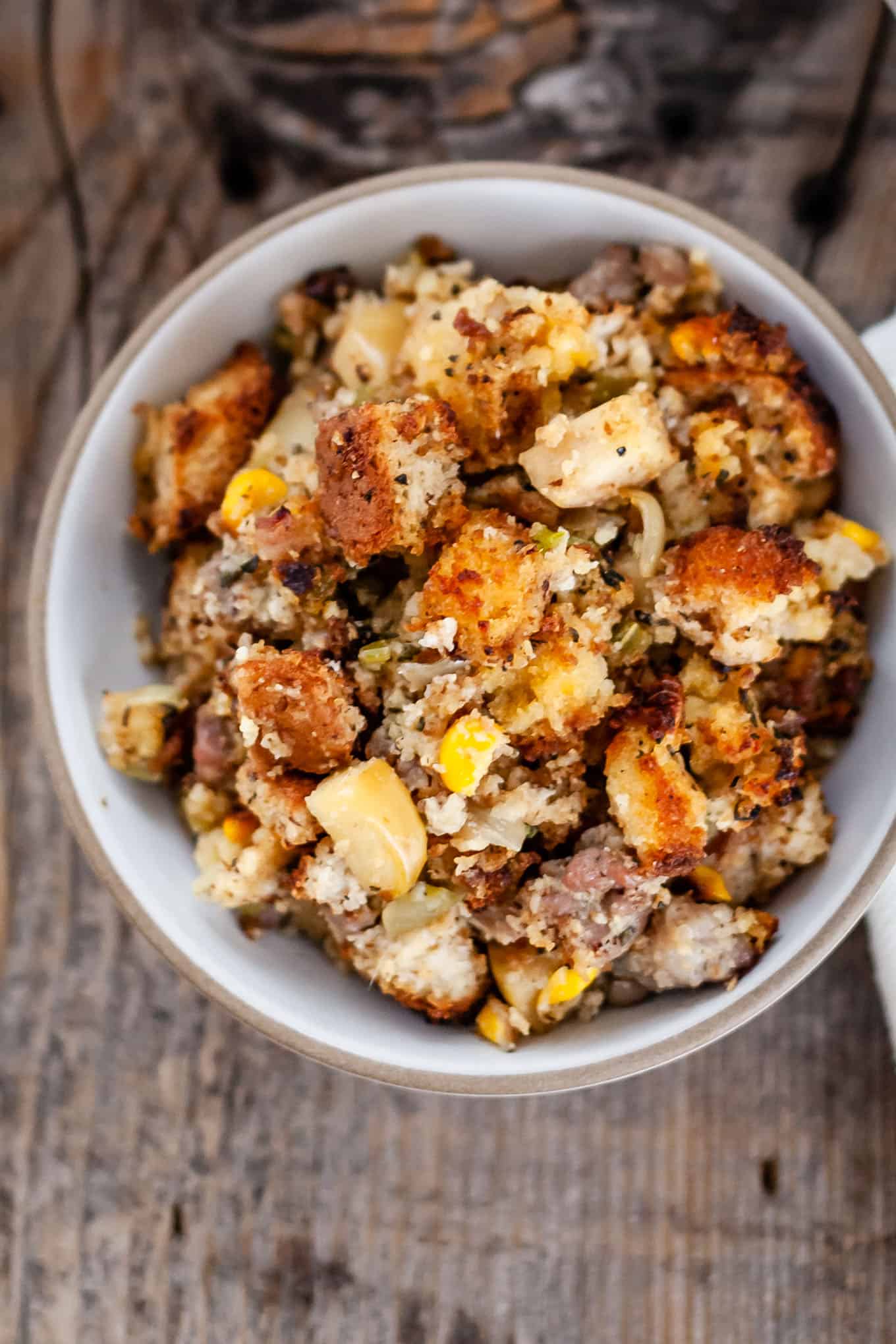 Even though I've made this exact stuffing for the past five Thanksgivings, I still had to call my mom today. I took for granted the opportunity to ask her "is this stuffing too dry?" until she wasn't by my side making mashed potatoes.

This is the only stuffing recipe I'll ever need, yet somehow this is the first time I've written it down in its entirety.

Without fail, every Thanksgiving, I have to search through my inbox to find the 5-year-old e-mail to mom with my Thanksgiving shopping list just to recall what I put in my stuffing. Not this Thanksgiving though. This year, I'm writing it down for posterity! 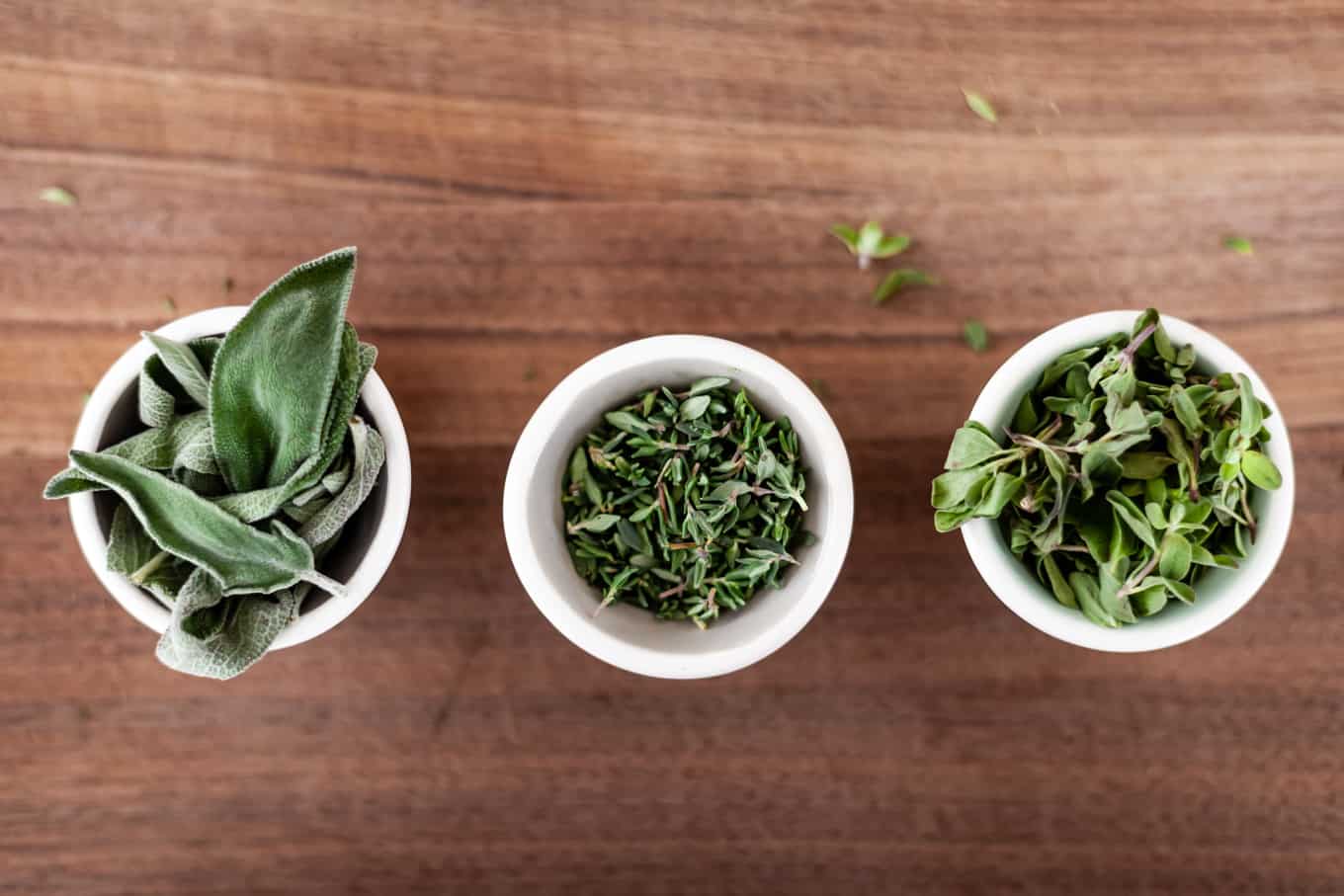 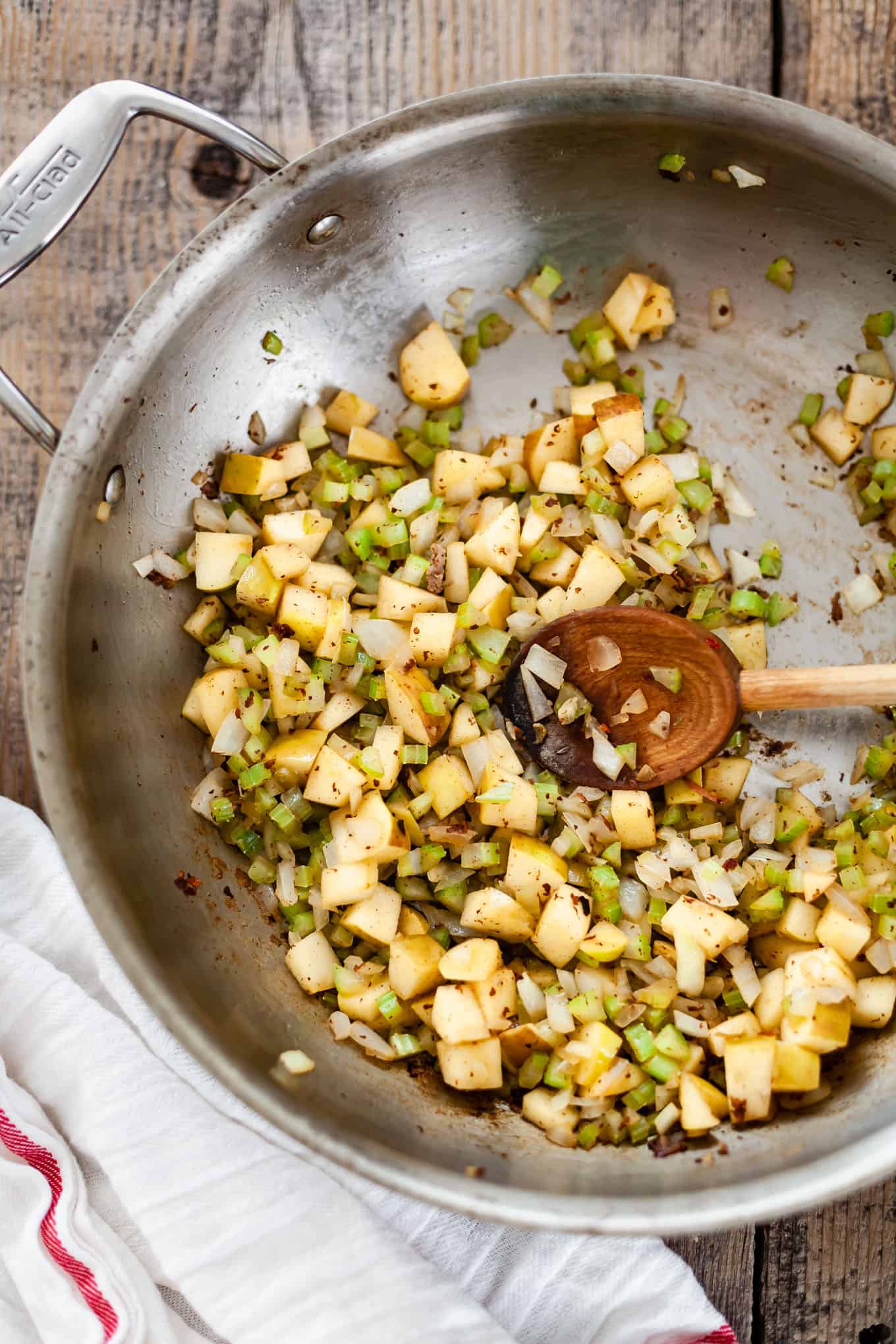 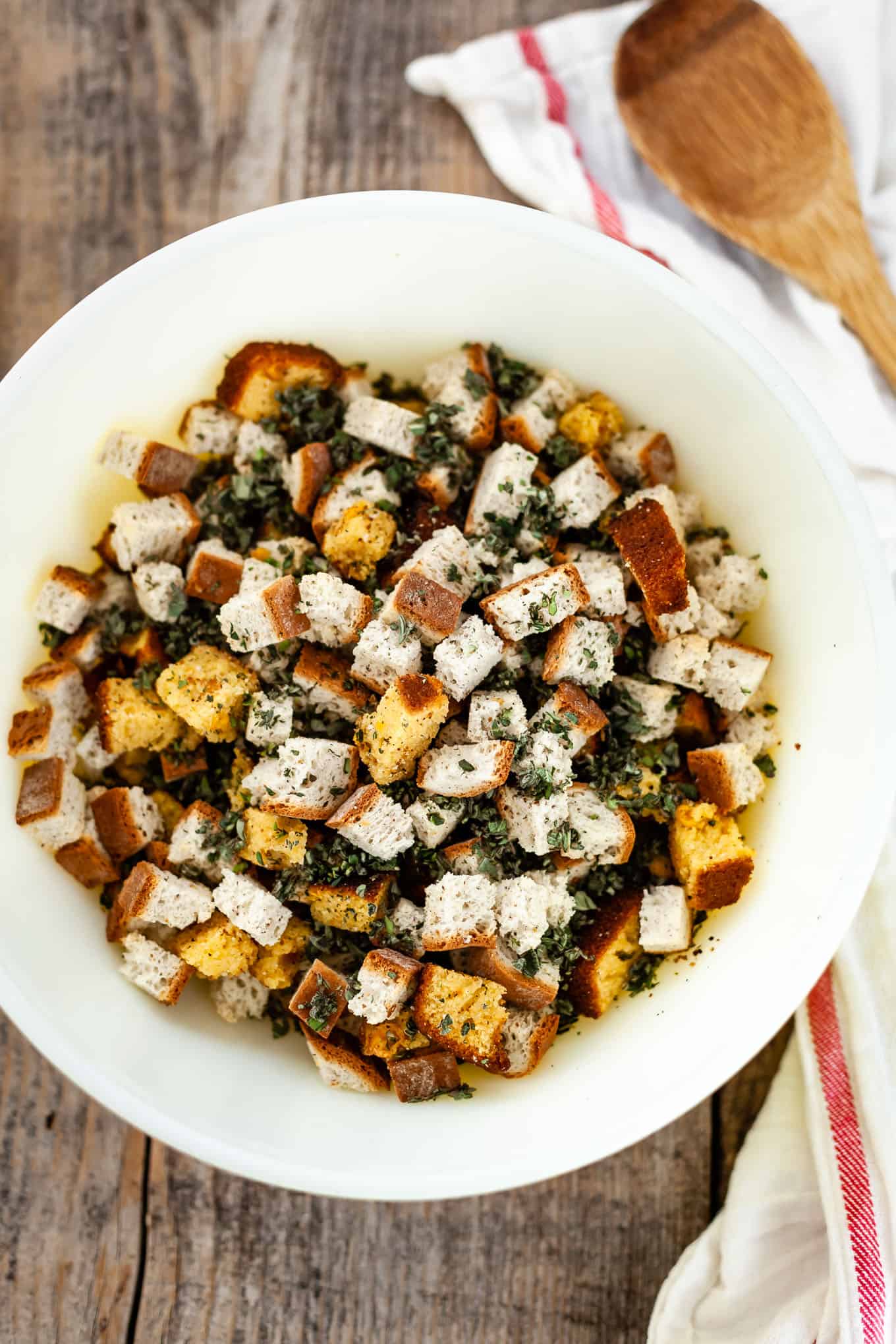 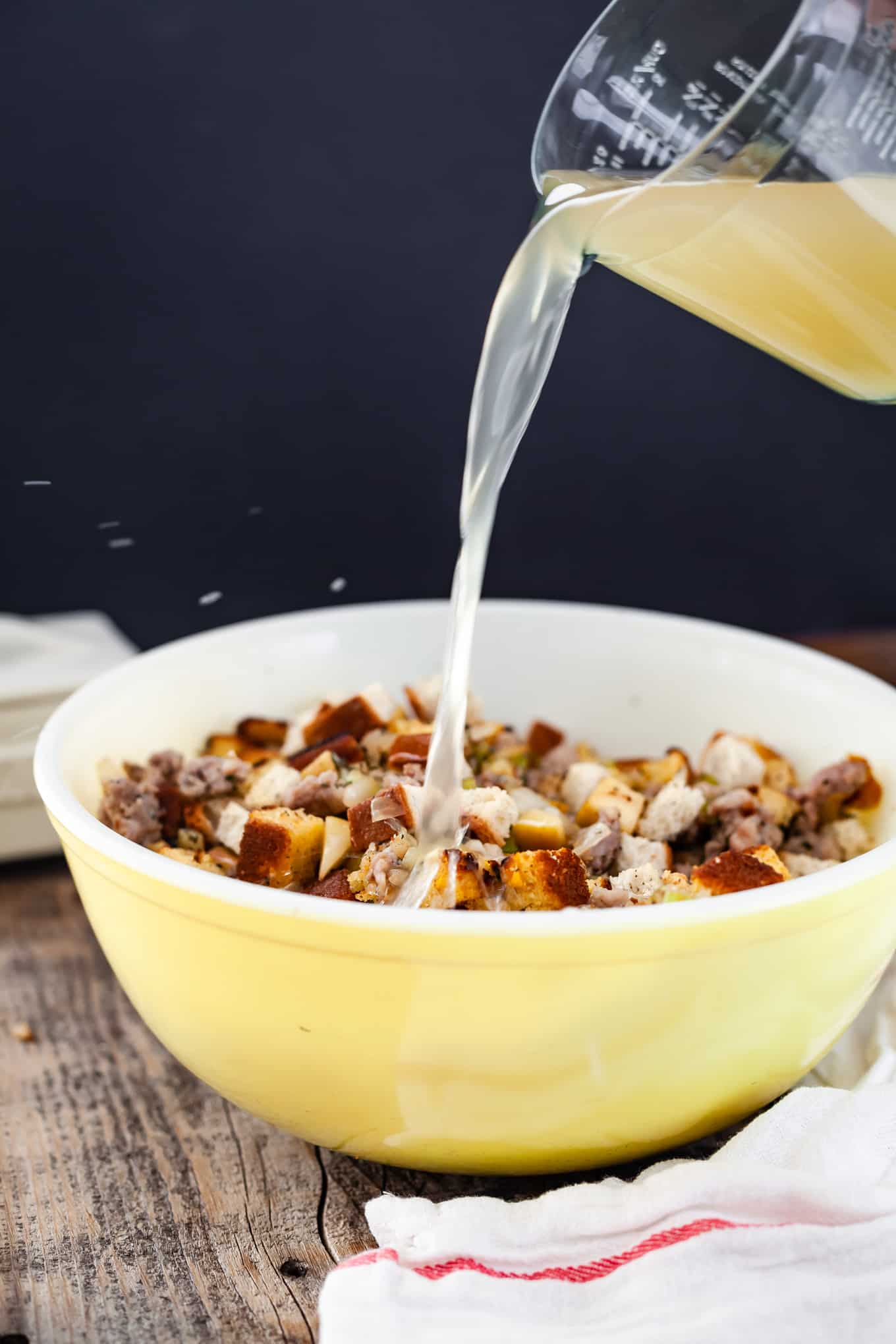 Over the years, this stuffing has gone through many iterations that started with a seasoned cornbread stuffing box mix. The first version didn't have onions, and a couple of years my mom snuck water chestnuts in (I've since vetoed them - it's a texture thing).

With homemade cornbread and fresh herbs, this version is absolute perfection.

How to make Gluten-Free Cornbread stuffing

This stuffing is made gluten-free with homemade cornbread. 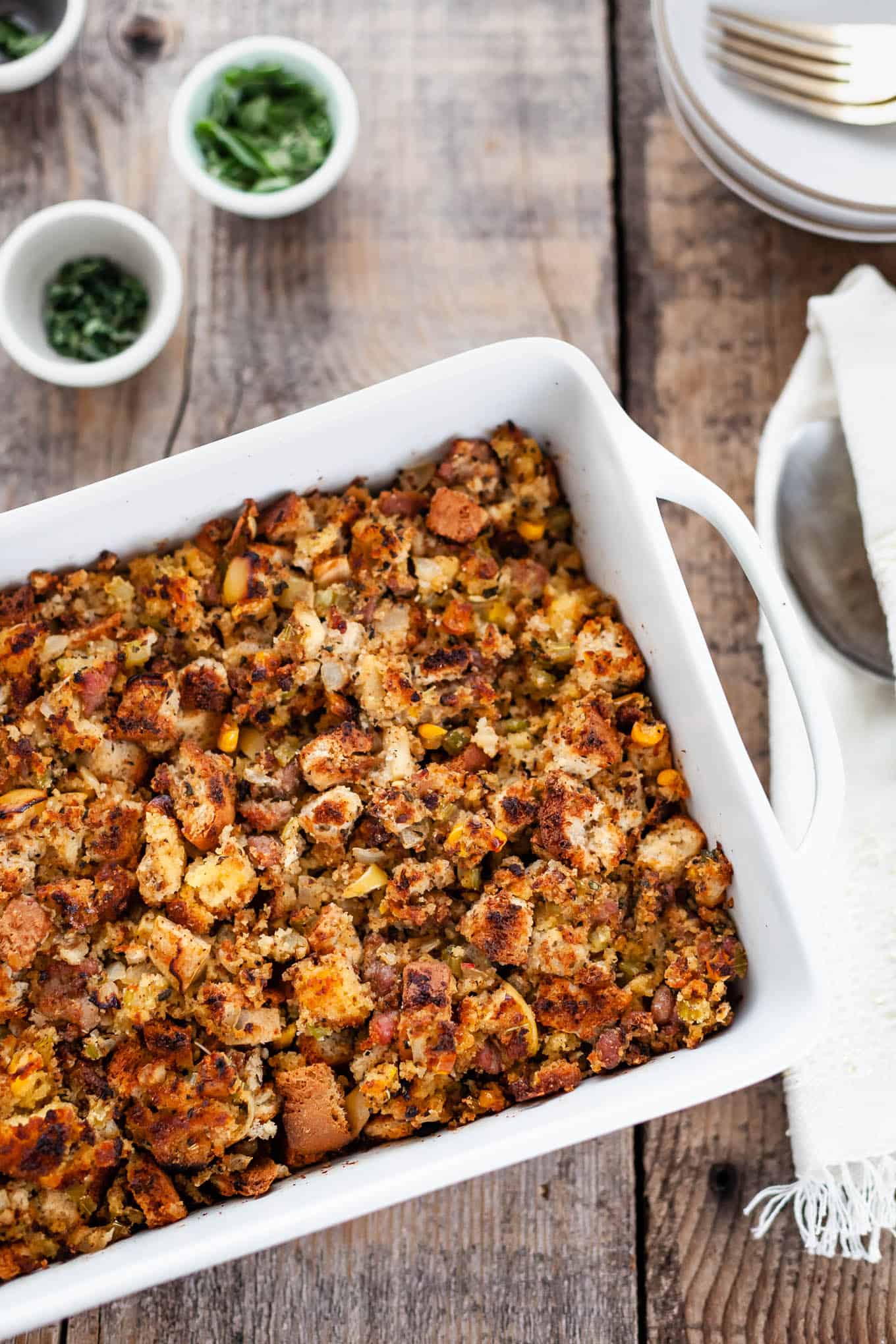 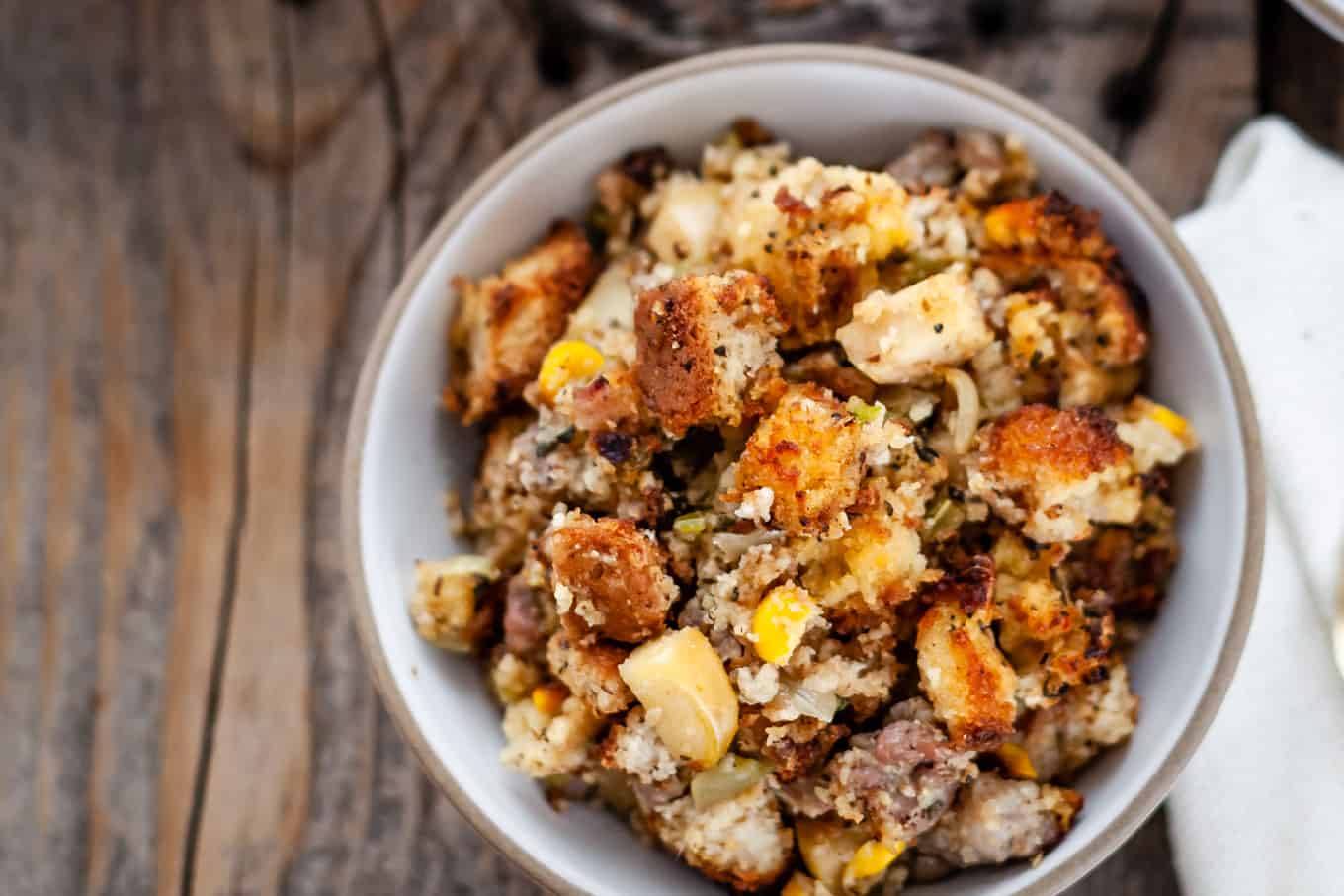 The flavor key to this stuffing is adding sausage. Don't skip it! The spice from the sausage contrasts the sweet apples and corn.

If there's one Thanksgiving leftover that people fight over in our house, it's this apple and sausage cornbread stuffing.

Can you Make Gluten-Free Stuffing in Advance?

Save time by making this gluten-free stuffing a day or two in advance. Bake it all the way through skipping the broiler step, let it cool, then store it wrapped well in plastic in the fridge. Pull it out the morning of to let the dish come to room temperature, then ready, roast it, covered with foil, for 15-20 minutes at 350°F just to heat it through. Remove the foil and broil for 2-3 minutes to make the top crispy again! 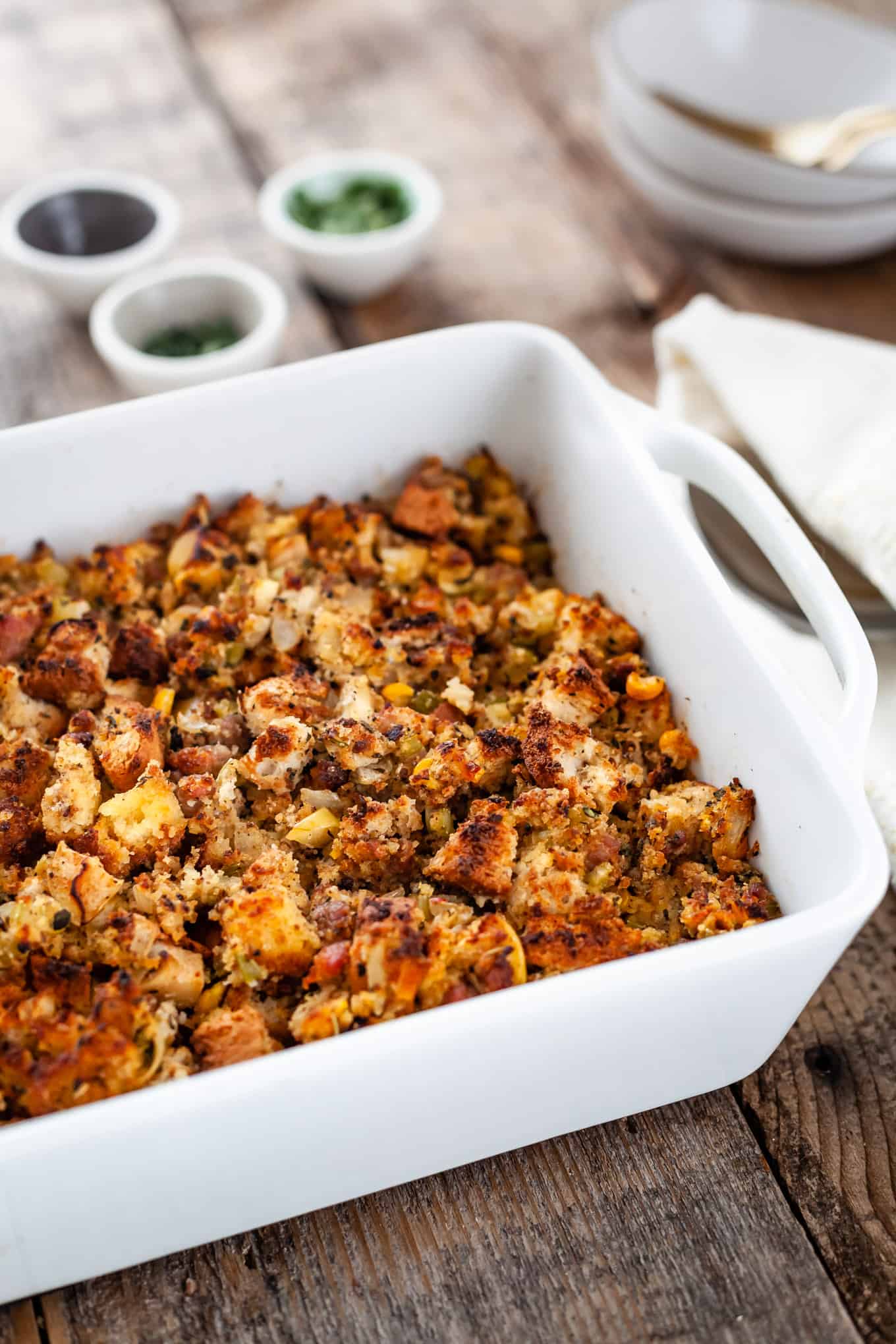 If you're looking for something vegan, I've since developed this gluten-free vegan stuffing as well! 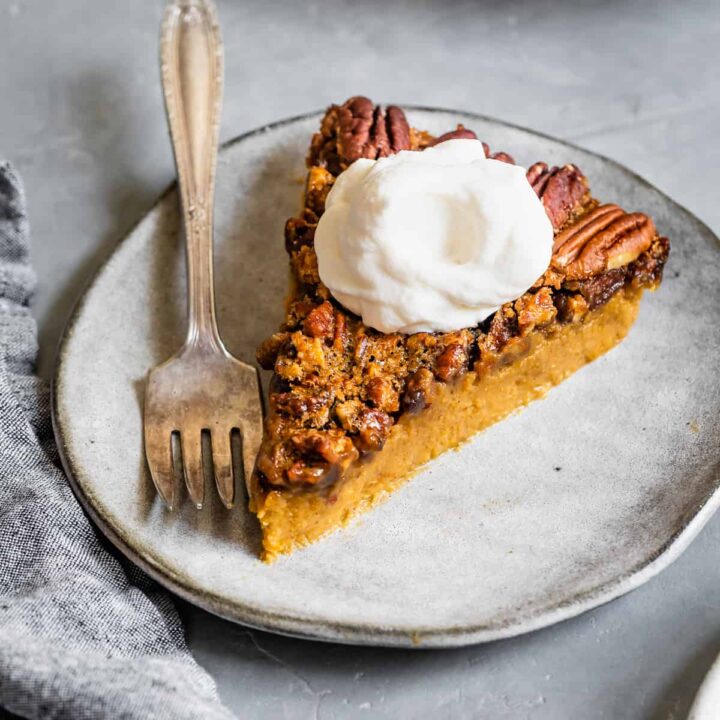 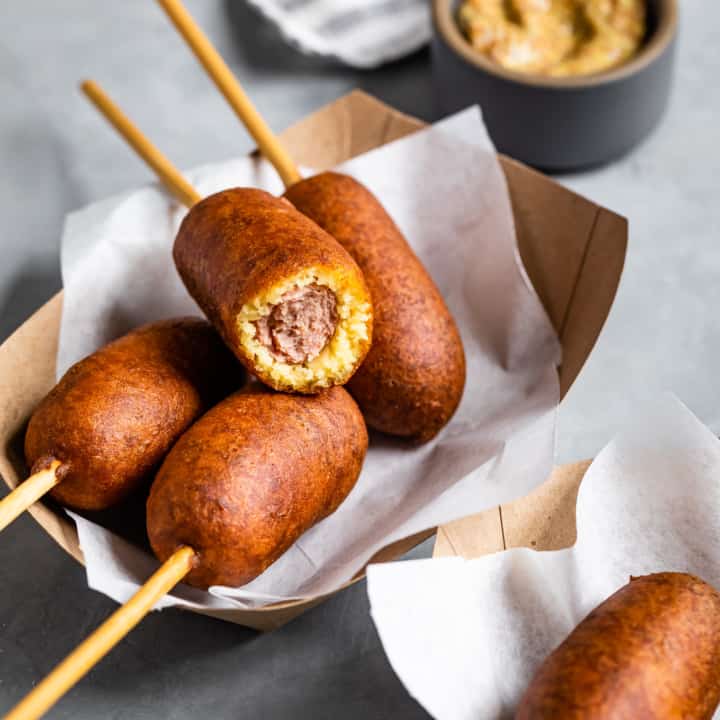 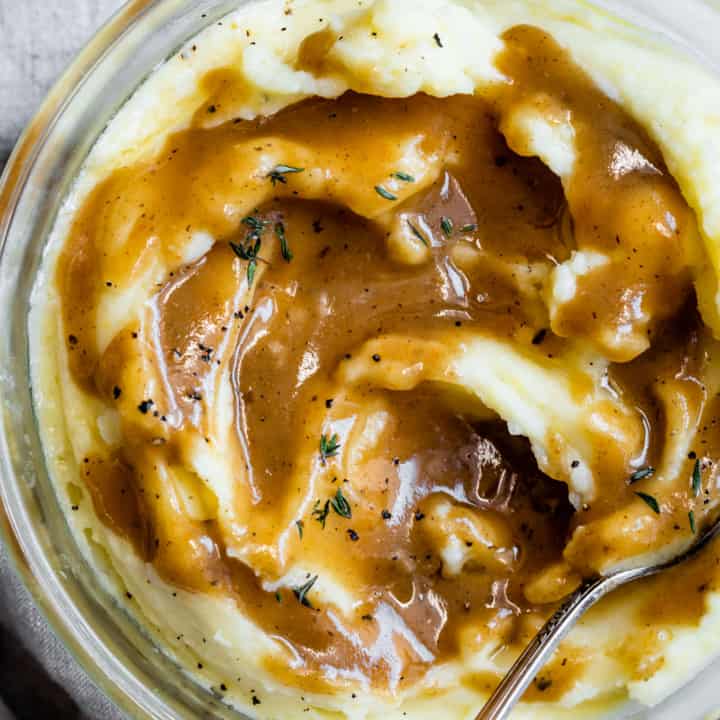 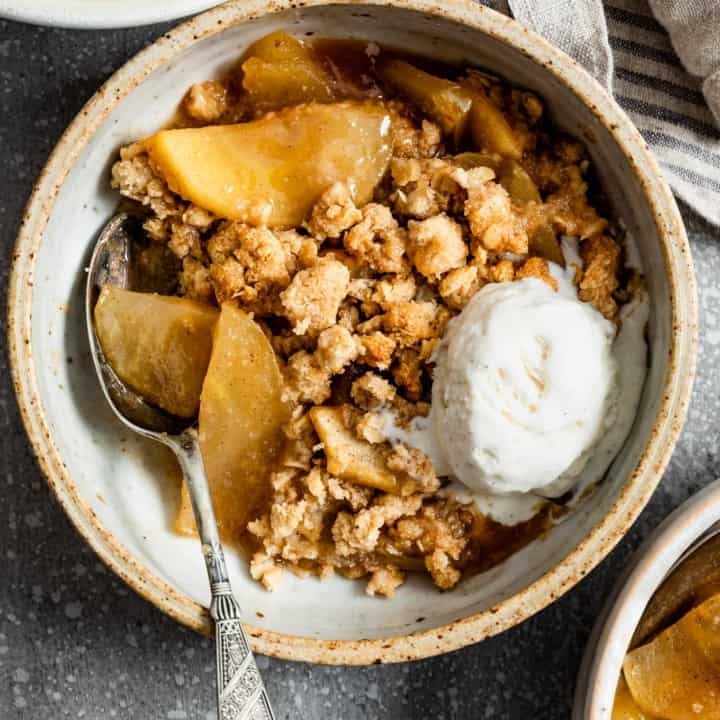