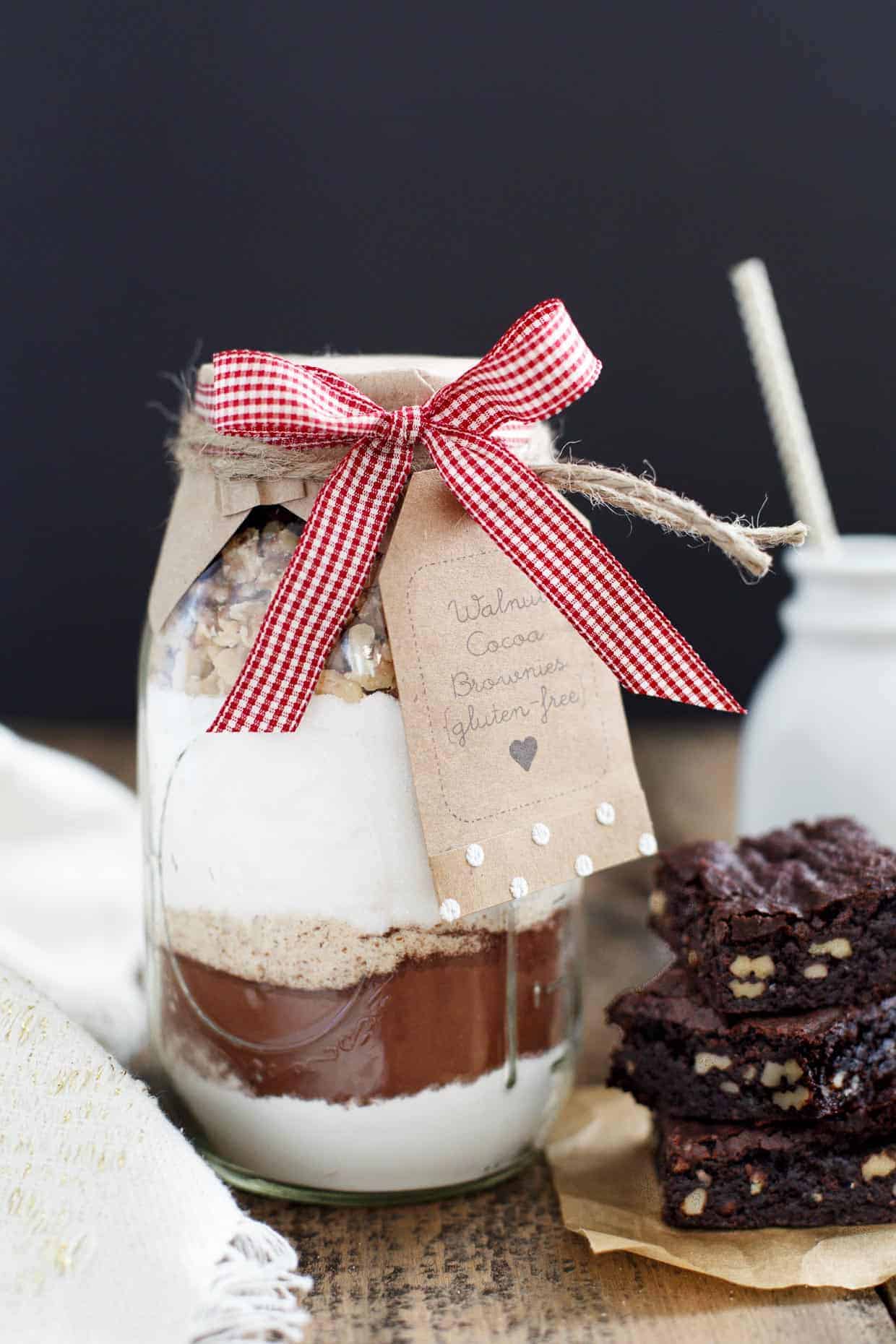 When it comes to gift-giving, I'm all about the homemade kind (as all of our friends who received a set of hand-carved salad spoons, a color-dipped bird's-eye maple cutting board, or a custom-painted kitchen bakery sign as a wedding gift in the past couple of years can attest to). A sentimental streak passed down from my mom who still has a framed card on her wall that I made when I was 5. Nothing says "I Luv U Mom" like yellow construction paper with oil pastels. You know the other direct route to someone's heart? A batch of this Walnut Cocoa Brownie mix all layered up in a jar. 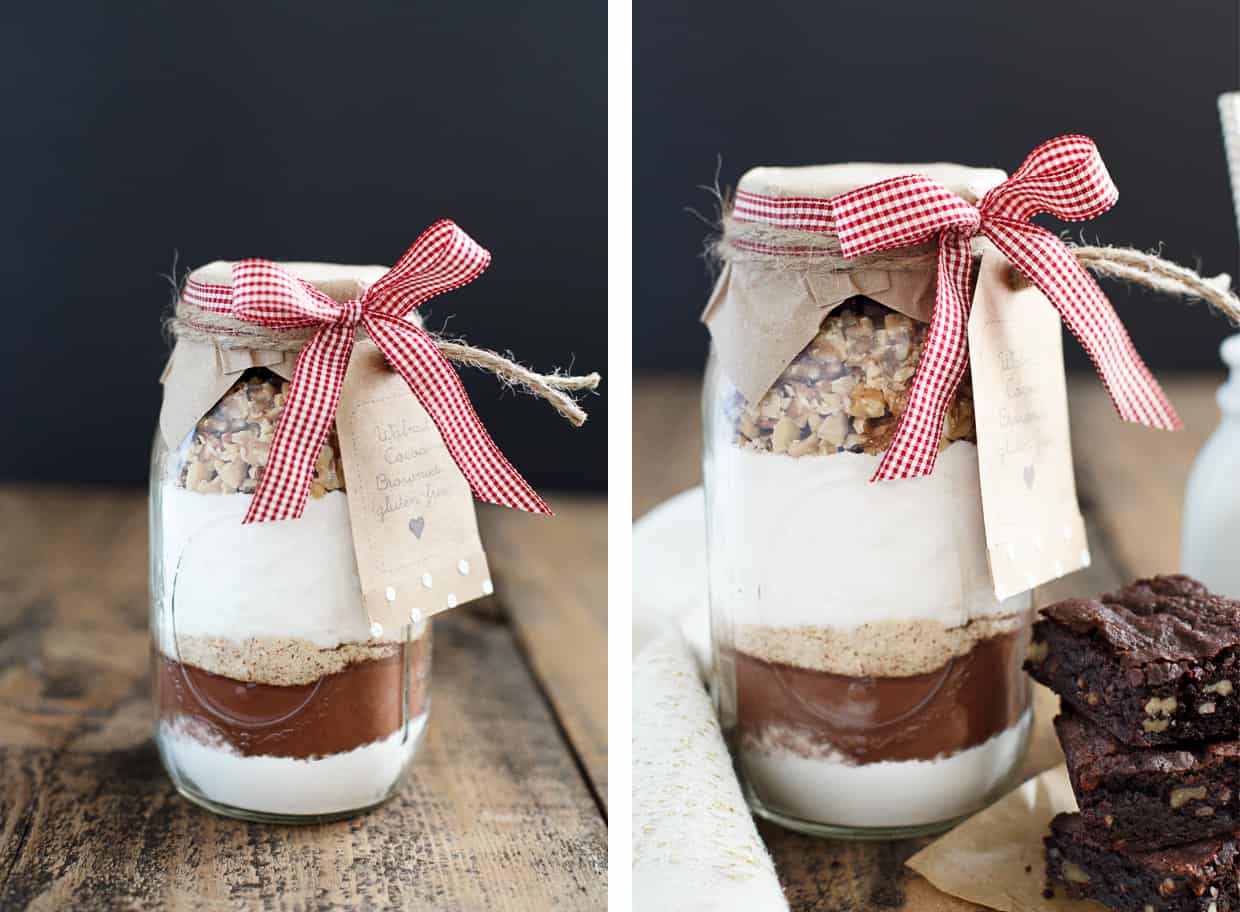 For the second year in a row now, I've been missing my holiday crafting pal. Cas spends just about as much time in the kitchen as I do, and always gives the best homemade holiday gifts - anything from pickled pumpkin to marmalade to pancake mix to hot cocoa mix.

This girl is so creative that she once taught me how to turn an ugly thrift store holiday knit sweater and a hanger into a wreath that's still the most festive Christmas decor we own. Then she used the leftover scraps to make holiday cards with sweater Christmas trees sewn on the front.

Though we couldn't be together last year, she still DIYed the heck out of the holidays and sent me little labeled mason jars filled with homemade rosemary salt, lemon salt, and vanilla salt across the country. Also known as jars oozing with love. 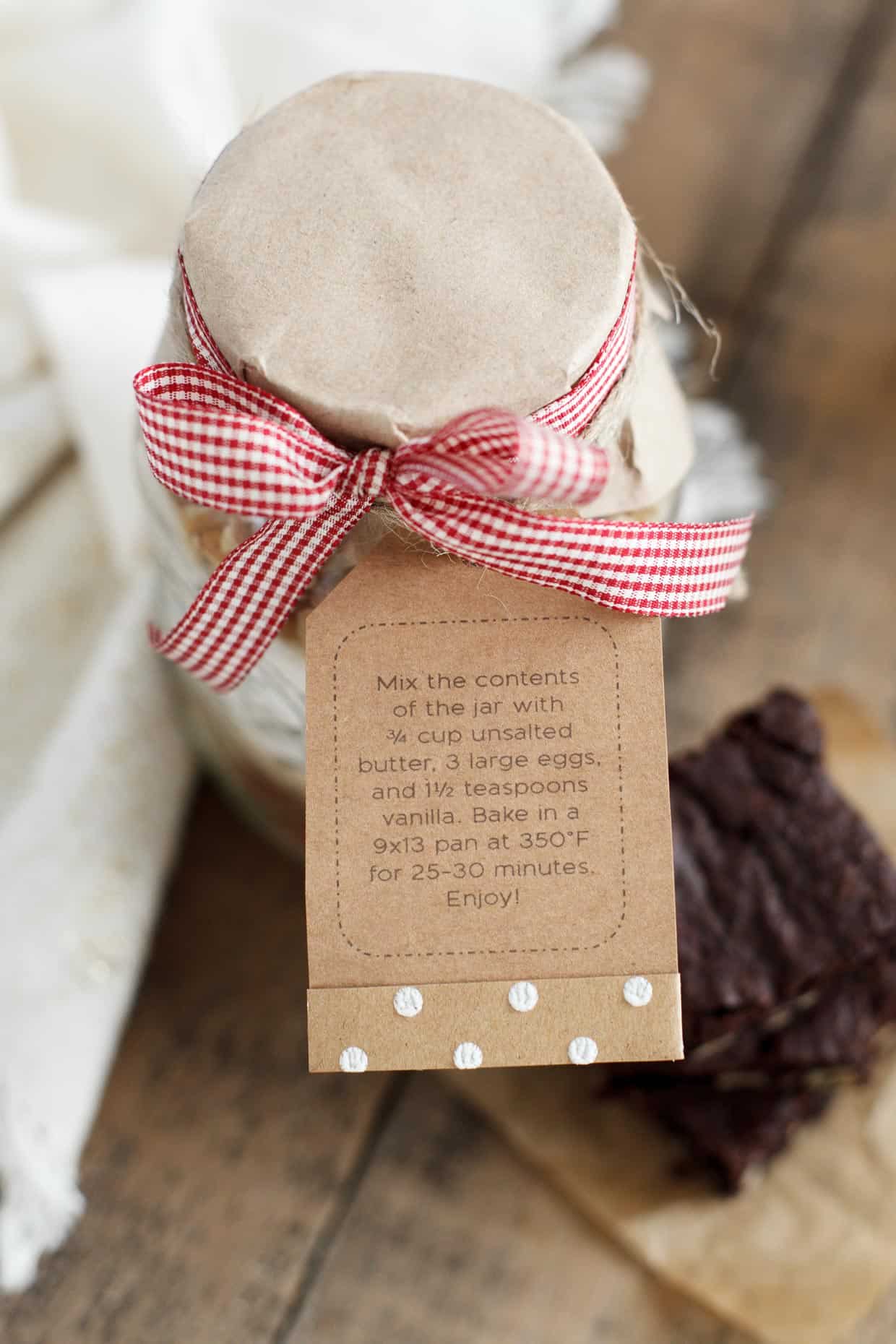 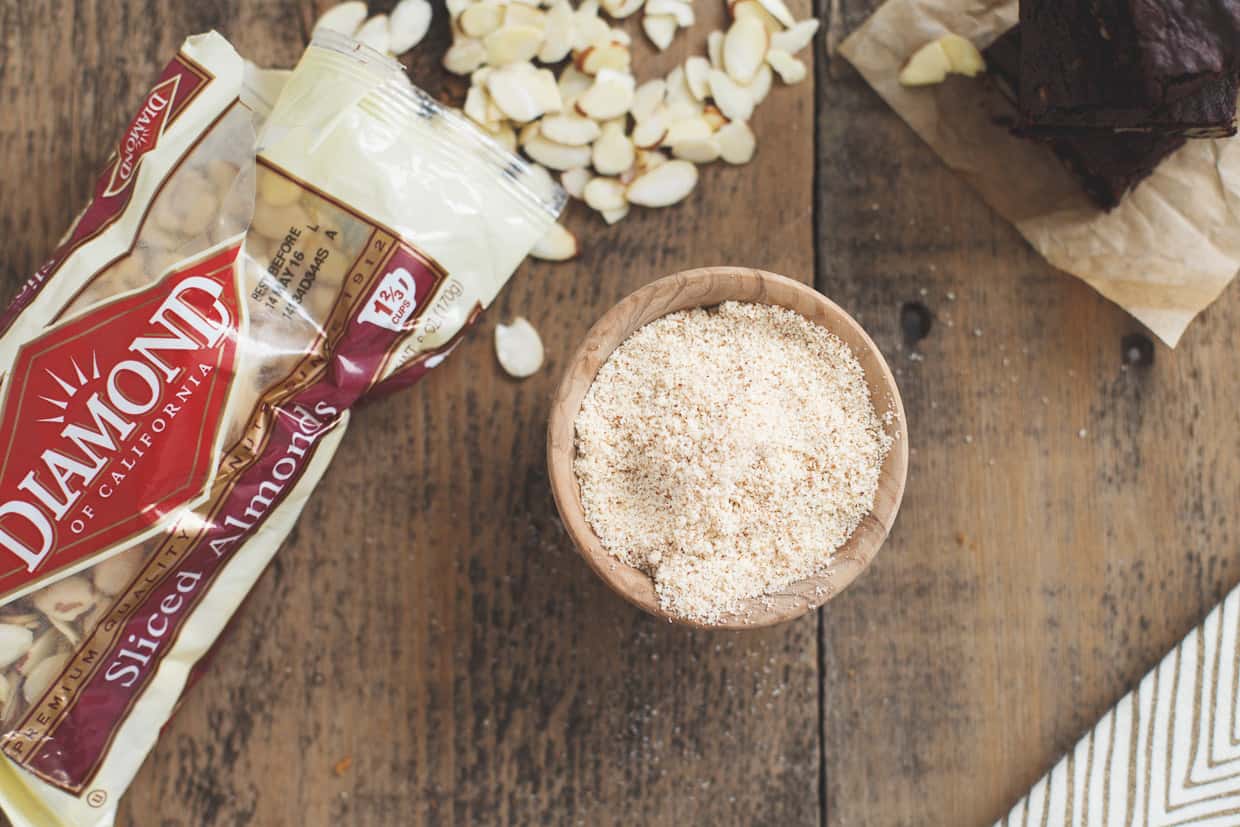 Spoiler alert: I need to step up my game, so this year I'm sending some love her way via this gluten-free walnut cocoa brownie mix in a jar. When I partnered with Diamond Nuts to come up with a layered gift in a jar recipe for the holidays, I instantly knew I'd send my jar to Cas.

Then literally the day after I'd perfected the recipe for these gluten-free walnut cocoa brownies, Cas and I played catch-up on the phone where I learned that her boyfriend Brian recently found out after a series of inexplicable health issues that he's gluten-intolerant. So Brian, these are also for you...from me to Cas to your belly. (Surprise!). 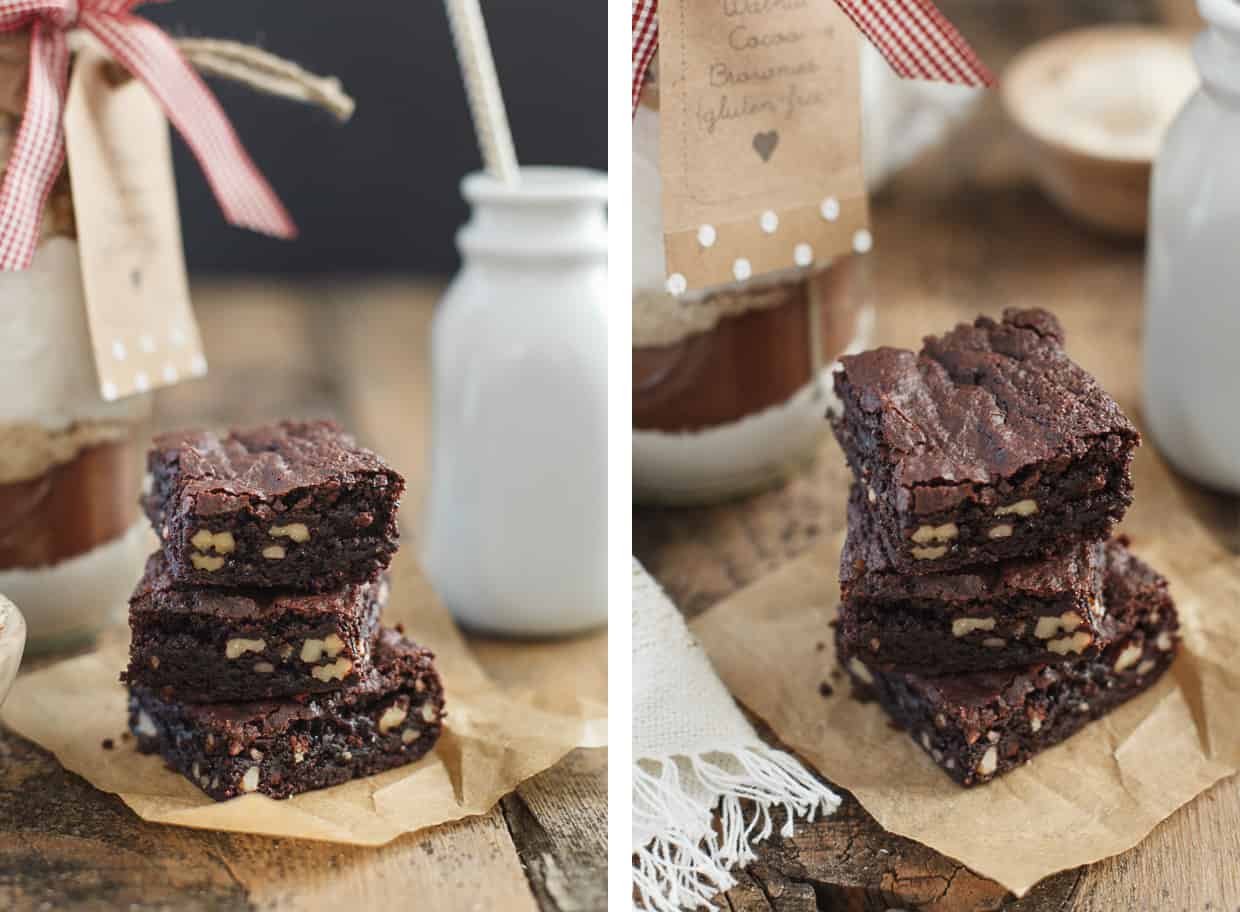 These brownies took a bit of time to perfect; Normally I make my brownies with loads of melted chocolate, so I tried to compensate by putting a little baggie of to-be-melted chocolate as the top layer of the jar. I bet you can guess how not stellar that looked. So instead I whimsically tweaked my recipe and baked up a huge pan of just so-so cake-y brownies.

Which side of the cakey-fudgy brownie battle are you on?

I'm firmly on the moist chewy fudgy side of the tracks (but not in the land of dense this-is-no-longer-considered-a-brownie fudge). And that second cakey attempt just wasn't cutting it. Fortunately Lucas's cousin was in Berkeley for the football game that day and happily took the tray of brownies off my hands. Have you seen a college freshman's face when you offer a batch of freshly baked (rejected) brownies? It's sheer determination. Must get to the brownies by any means possible, even if it means almost missing the last bus back to Stanford. 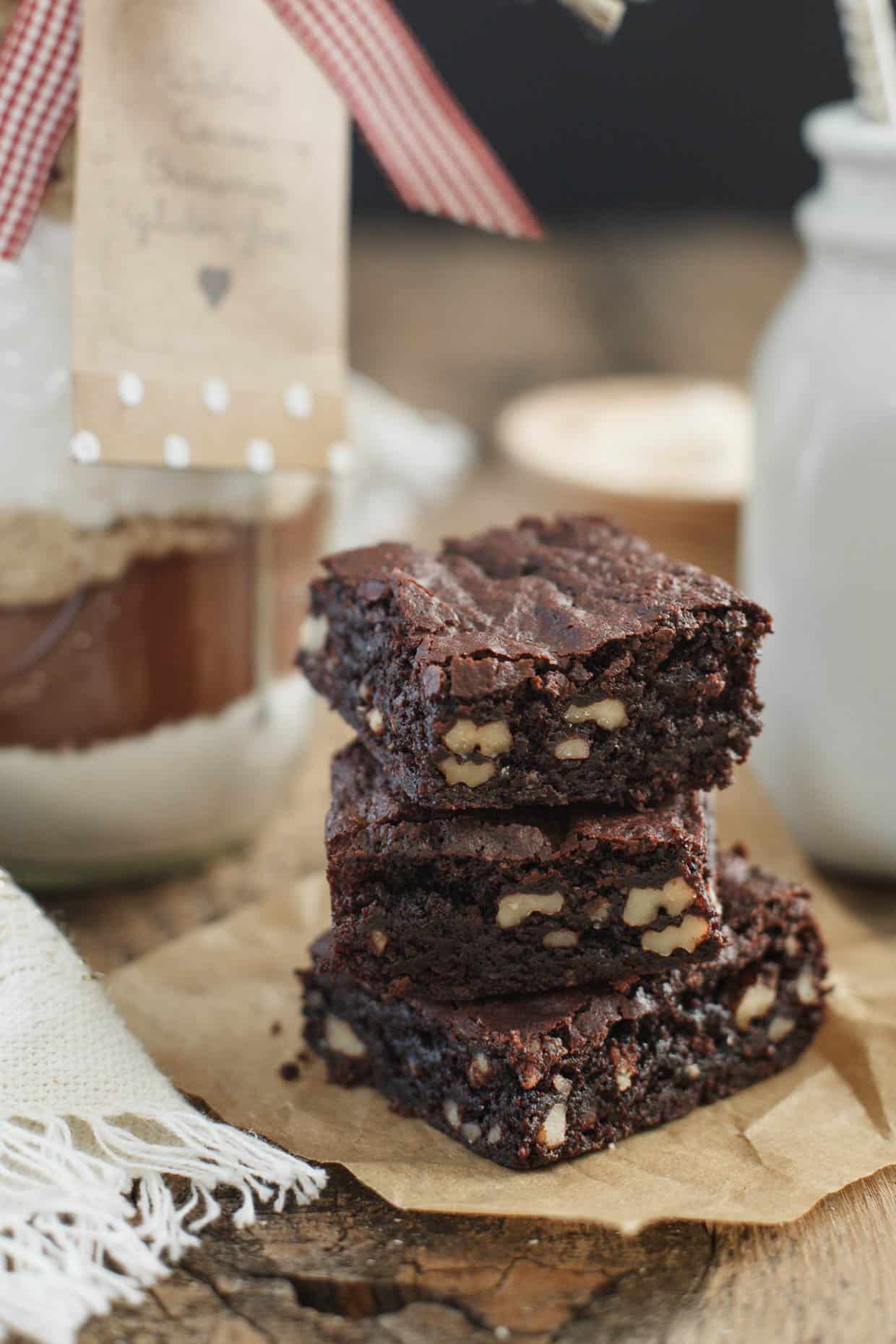 This batch - round three - is exactly what I'd been searching for in a brownie.The key to getting that deeply moist chocolate texture out of cocoa brownies is a generous amount of cocoa powder and a high sugar to flour ratio. These cocoa-based brownies are richly chocolately, super chewy, and incredibly moist, with their tops crackling just so. I used Diamond Almonds to grind up my own almond flour to turn the brownies gluten-free. And the bars get an extra boost with crunchy chopped walnuts studded throughout.

If you're looking for DIY holiday inspiration, this layered walnut cocoa brownie mix in a jar is a sure bet. 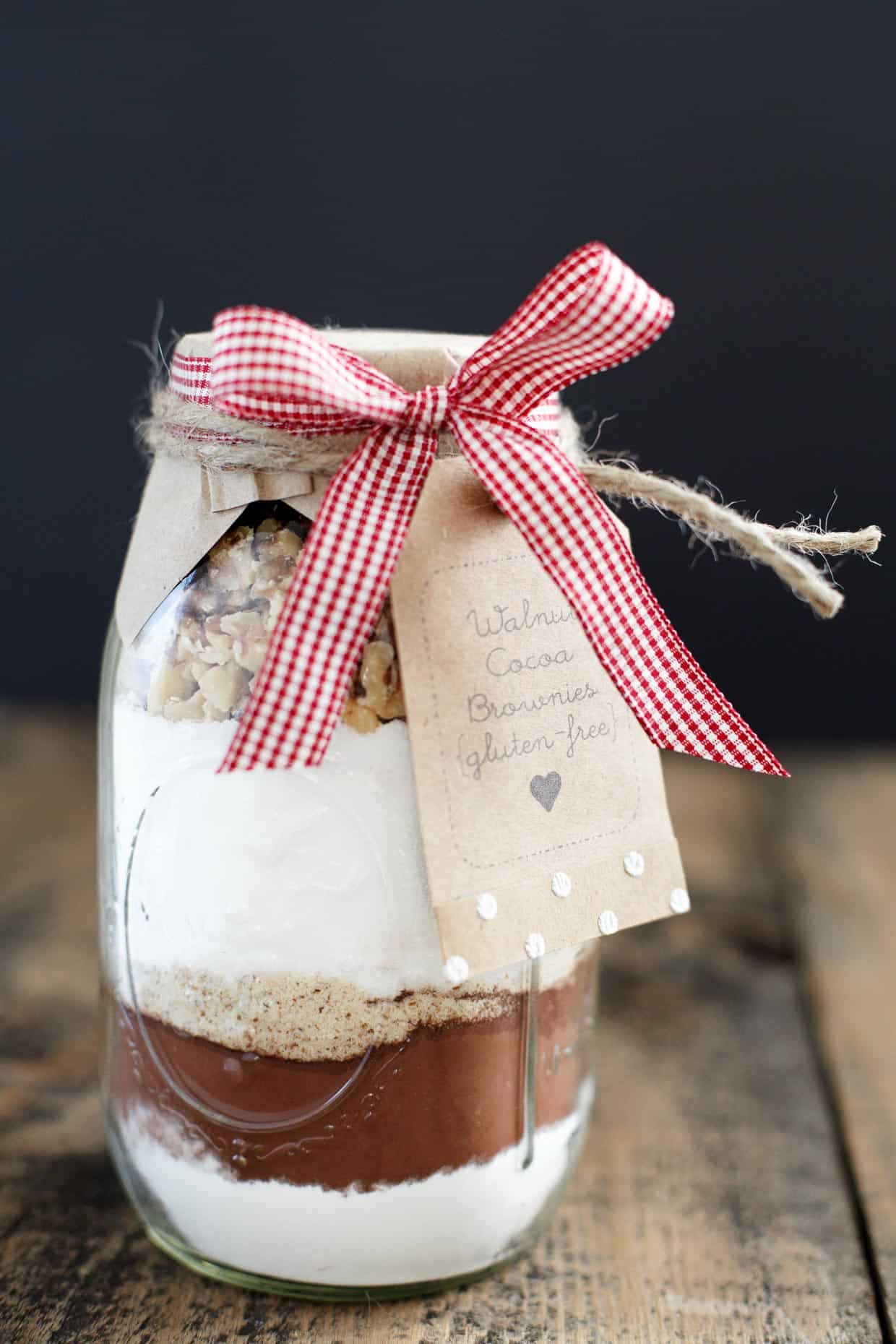 Sweet rice flour is also called glutinous rice flour or mochiko. You can get Koda Farms brand or Bob's Red Mill at many major supermarkets or online. It is different from "white rice flour" or "brown rice flour."


Disclosure: This post is sponsored by Diamond Nuts as part of their Gift-in-Jar campaign, but please rest-assured that all opinions expressed here are 100% my own. Thank you for supporting the brands that keep Snixy Kitchen baking!