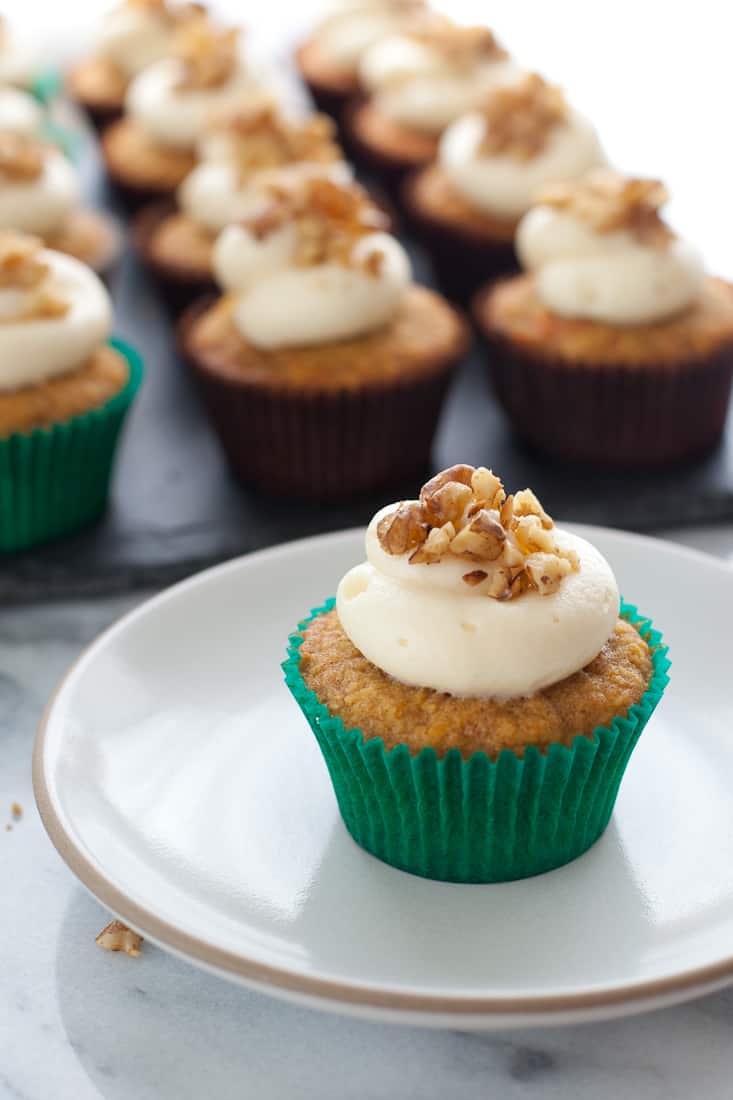 My college boyfriend thought I was a terrible cook. I was offended, and the fact that he explicitly told me so was a pretty clear sign there were better fish in the sea. To his credit though, he was probably right. One of my $1.50 gourmet dinner specialties in college was 35-cent top ramen noodles – replace the seasoning packet with mushrooms, chicken, and snap peas sautéed in soy sauce. I definitely never made anything as fancy as gluten-free carrot cupcakes with honey cream cheese frosting. 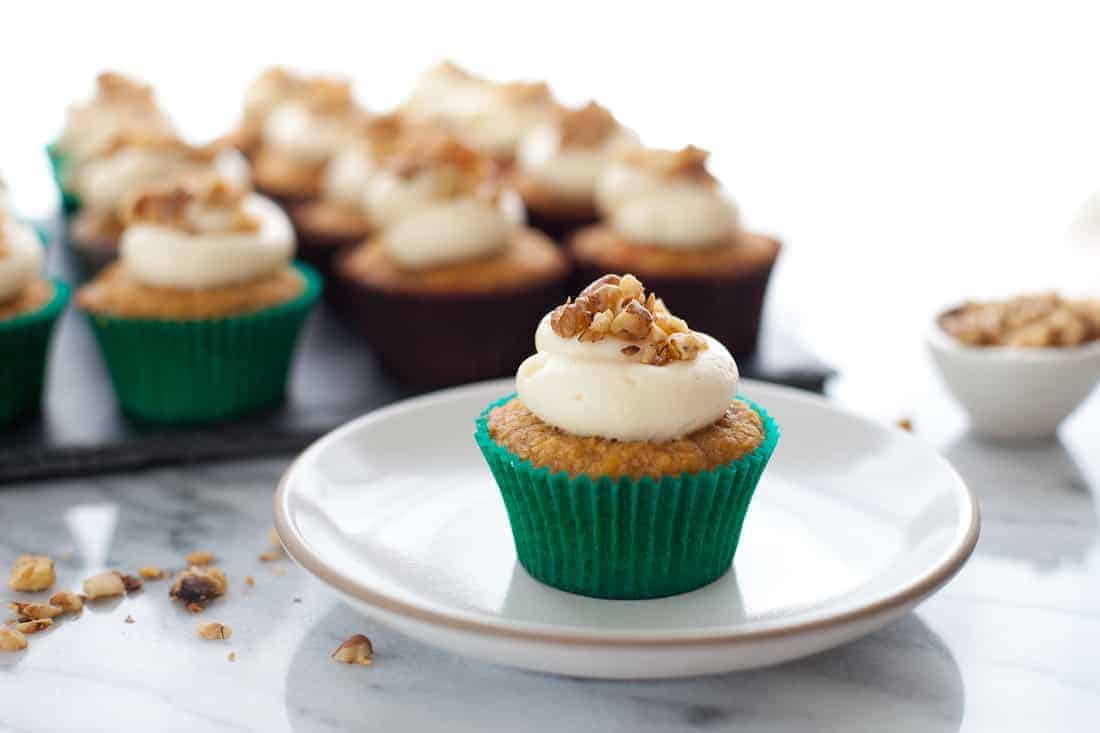 In an effort to recreate part of my family’s tradition, on my first Easter away from home, I served him some deli ham slices and mixed a bucket of cool whip with fruit salad. Barely homemade, but so proud. Now I know you’re probably thinking my creamy fruit salad is dangerously close to one your grandma served with some green JELLO in the 50s, but listen, there isn’t a single thing wrong with whipped cream and fresh fruit. The problem lies in the fact that I served it as a main course on Easter…and it was the most elaborate thing I made.

My husband, on the other hand, thinks I’m a fantastic cook. Even after eating a burrito I fed him that was filled with cinnamon instead of cumin – proof of his patient and kind soul. This Easter Sunday, I’ll be serving, among other things, my aunt’s scalloped potatoes and, for dessert, these gluten-free carrot cupcakes with honey cream cheese frosting. From scratch.

(You drooling yet, Mom?) Carrot cake is my mom’s weak spot. Remember how every Christmas,  Santa would fill my stocking with chocolate candies even though he knew perfectly well I wasn’t a fan of chocolate? Well, this also happened with homemade carrot cake on my 5th birthday. Just what every kid wants – carrot cake topped with tons of shredded coconut dyed green to look like grass and a little bunny figurine as a token of my spring birthday.

Clearly it made an impression - you've got a girl who loves sweets and you serve her everything that 5-year-olds find yucky about dessert - vegetables and the texture of store-bought shredded coconut. Apparently she also played this mean trick on my brother one year too. And guess what? He also wouldn't eat his cake. Here's the thing, if she'd left off the coconut and called it something other than carrot cake, it maybe would have stood a chance. 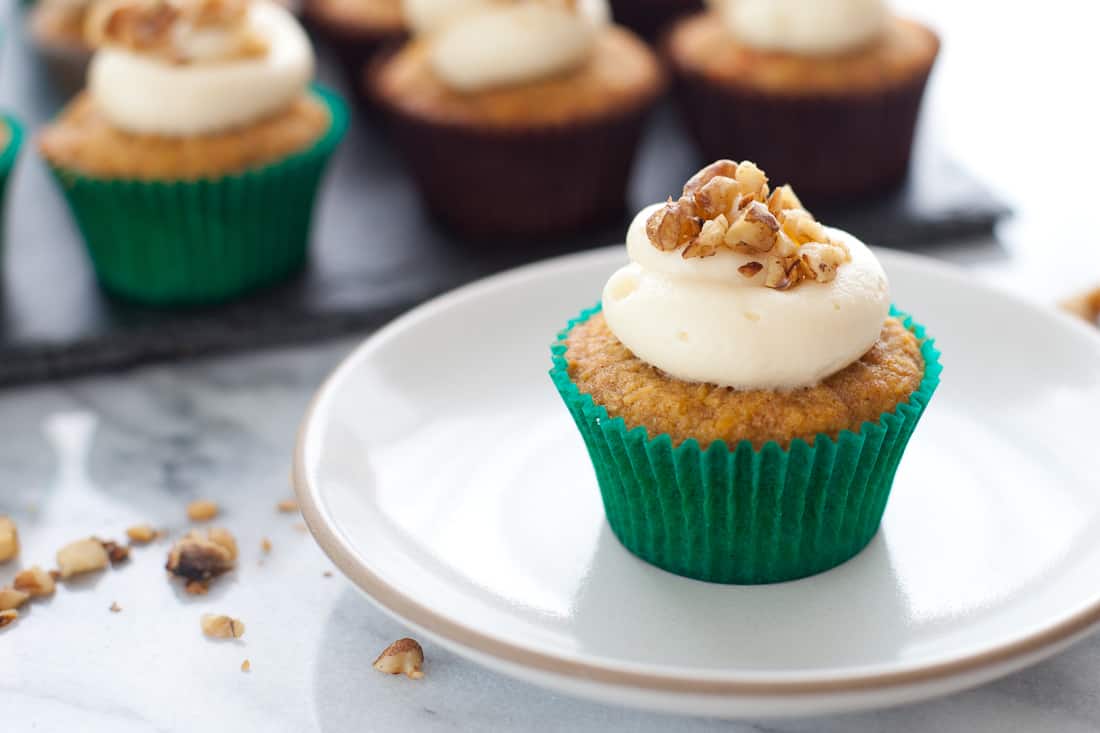 Lucky for mom, I've come around to carrot cake in an intense way. If I'm at a wedding and carrot cake is an option, I'll always take it. Especially if it's topped with a sweet cream cheese frosting. I’ve been tinkering with this carrot cake recipe over the past month to get it just right. I first made a batch for my undergraduate research assistant's birthday, and while the cupcakes tasted spectacular, they were very fragile and peeled completely away from the wrappers as soon as they cooled.

For my second iteration, I changed a few things: I increased the amount flour, increased the oven temperature and baking time, and reduced the amount of oil/butter a smidgen. I served this batch up at my birthday pig roast. When I announced to the folks with the small kids who were escaping the rowdy action and the cold by playing with blocks in the living room that I'd put the cupcakes on the dessert table, they were first in line. And our 5-year-old neighbor was super pleased with the carrot cupcake. 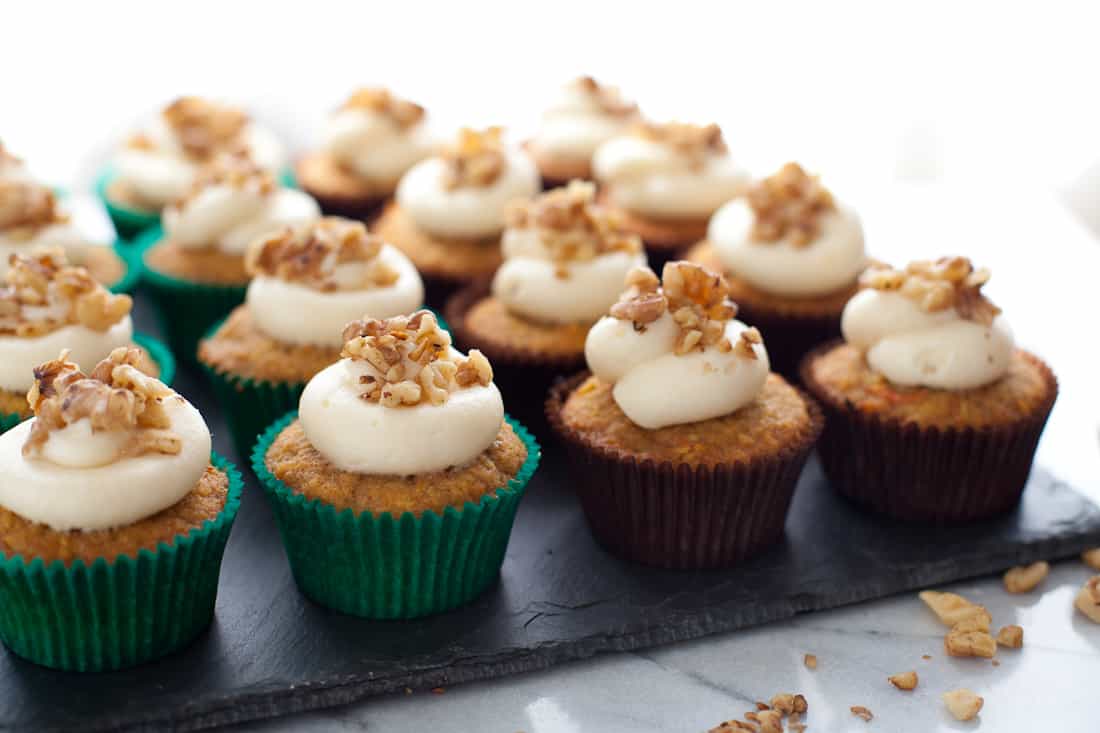 With how moist and fluffy they are, you'd never know these carrot cupcake were gluten-free. This is not a "sub in for gluten carrot cakes, but not quite as good" cupcake - no, this cupcake is delicious in its own right. In fact, my friend Jen was shocked last week when I mentioned that the carrot cupcakes from the pig roast potluck were gluten-free.

The orange zest pops amid the sweet cooked carrot and coconut flavors and the creamy honeyed frosting ties it all together. I could eat so many of these in a row that I've even tried convincing myself this is a muffin and it's totally okay to eat as breakfast. There's carrots and oats in it - that makes it breakfast, right? That's a thing, right?....right? No matter what your dietary restrictions, these will be a hit at your next party.