These cheesy pumpkin taquitos are the perfect vegetarian dish for your holiday spread or weeknight dinner. Topped with a roasted jalapeño crema and toasted pepitas, it's like a cross between enchiladas and taquitos with fall flavors. 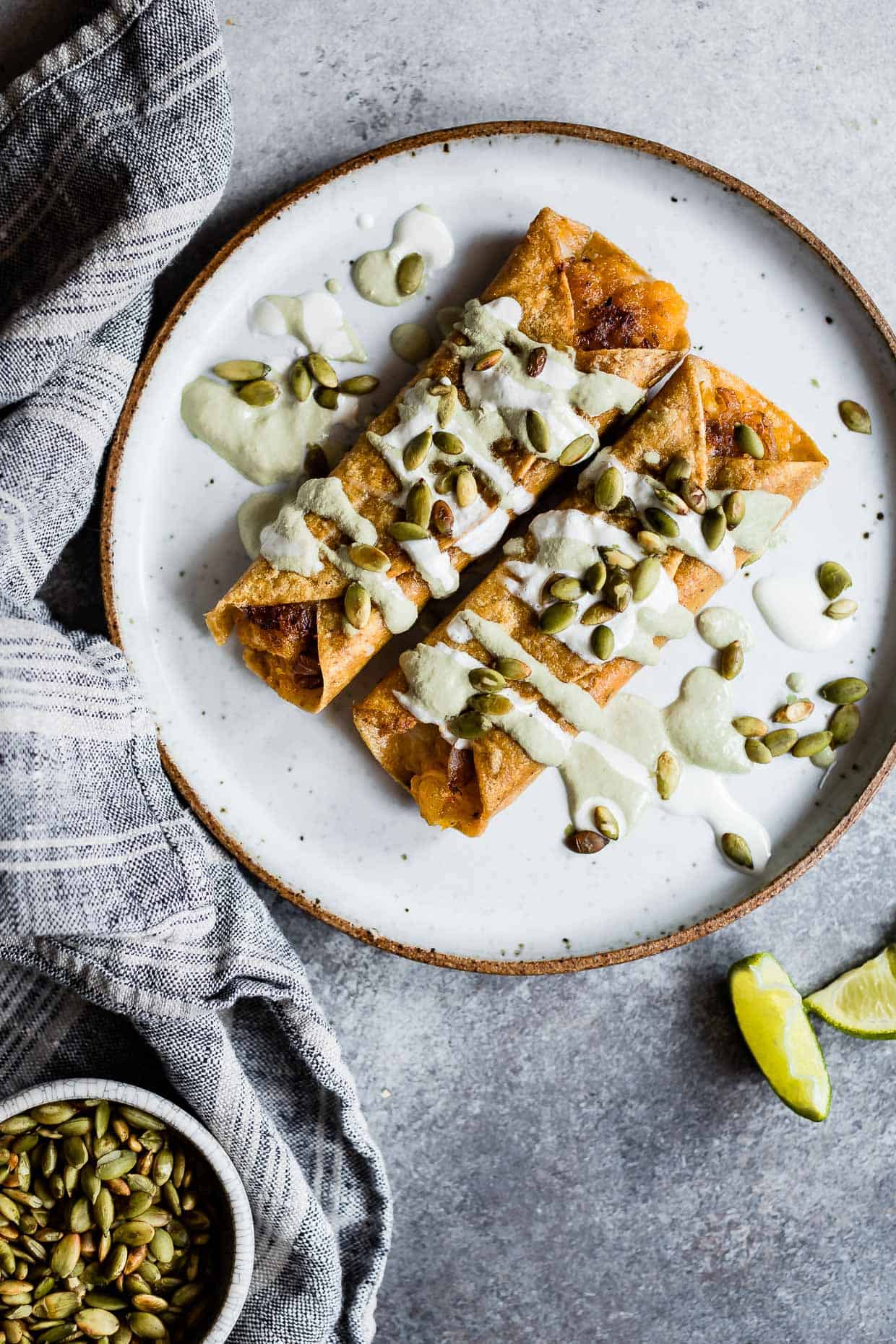 It's officially pumpkin season. Usually I grab a can of purée if I'm looking for pumpkin or turn to butternut when I want roasted squash, but sugar pumpkins deserve their own special seat at the table. Plus, the internet is having a virtual pumpkin party and I wanted to serve pumpkin on pumpkin on pumpkin with these cheesy pumpkin taquitos with roasted jalapeño pepita (pumpkin seed) crema and toasted pepitas.

With my summer menu video series all wrapped up, these fall pumpkin taquitos are kicking off my holiday video series in collaboration with Roth Cheese. While taquitos' reputation proceeds them as a party finger food, these cheesy pumpkin taquitos are best served as a vegetarian main or side dish in your holiday spread. Imagine an enchilada crossed with a taquito with fall harvest flavors -  that's what we're serving up first! Stay tuned for a cheesy holiday appetizer up next. Scroll to the bottom for the recipe and video! 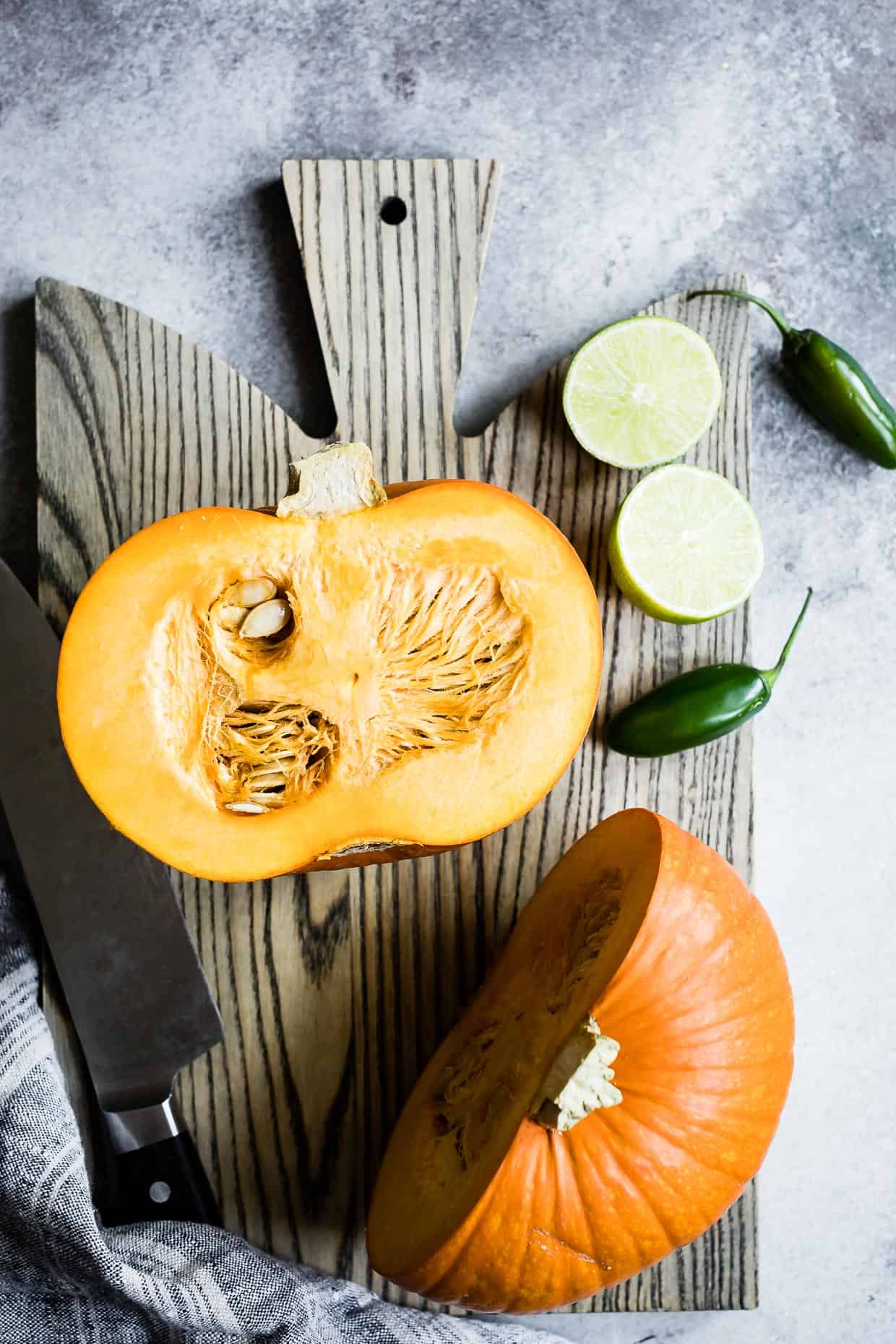 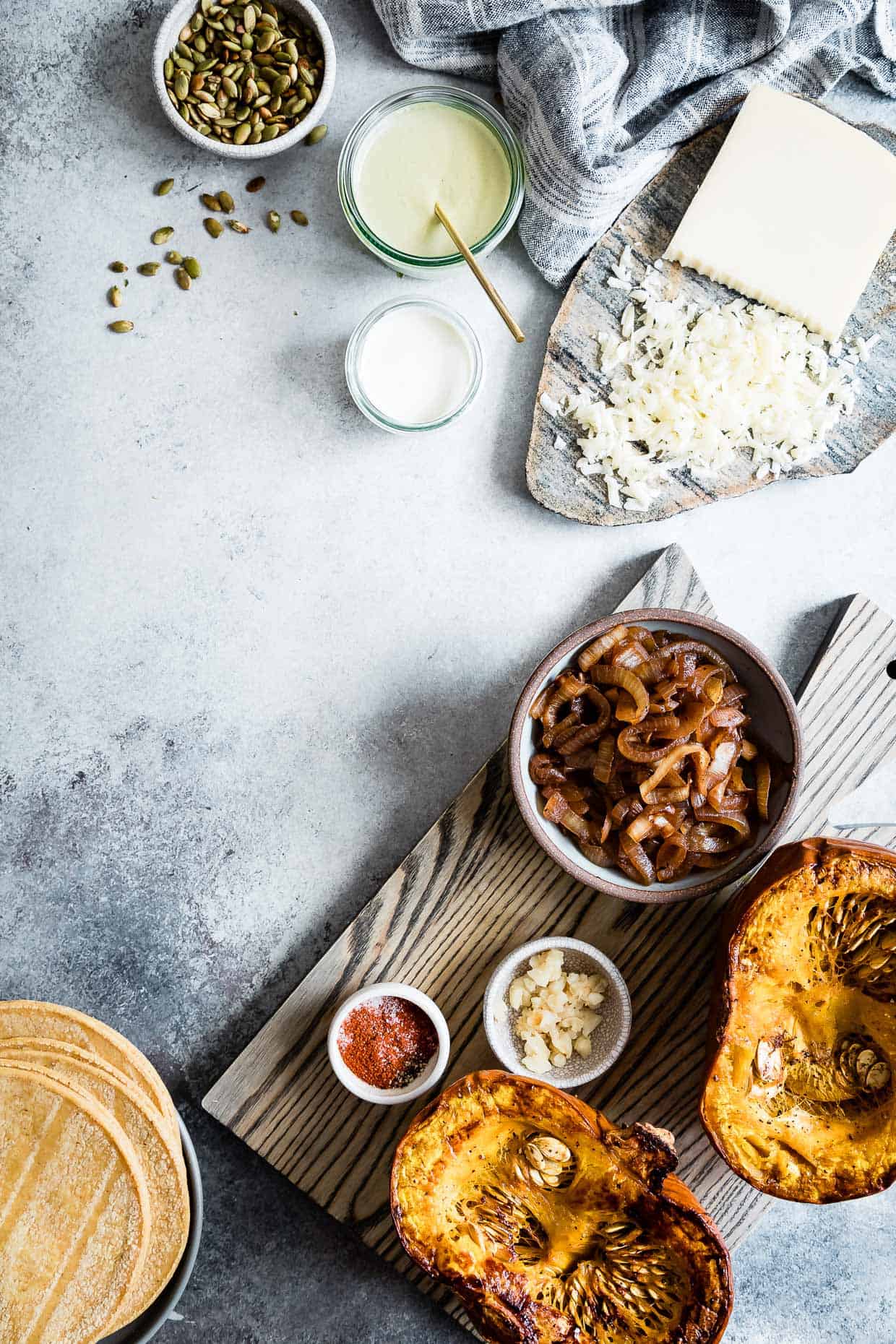 Compensating for my mom guilt from missing out last year, we made sure to hit up a pumpkin patch early this year.  This real-deal pumpkin patch has pumpkins you pick from the vine, a corn maze, a corn pit, a giant hay mountain, and farm animals. Something to satisfy the pumpkin patch nostalgia from my childhood (just as long as I ignored the brightly colored bounce houses and cotton candy/lemonade fairground concessions peeking up from behind the rows of corn). We left with a "daddy pumpkin," "mama pumpkin," and "lella pumpkin" (That's what Zoella calls herself) for our porch.

Two days later, the big pumpkin rotted from the inside out. 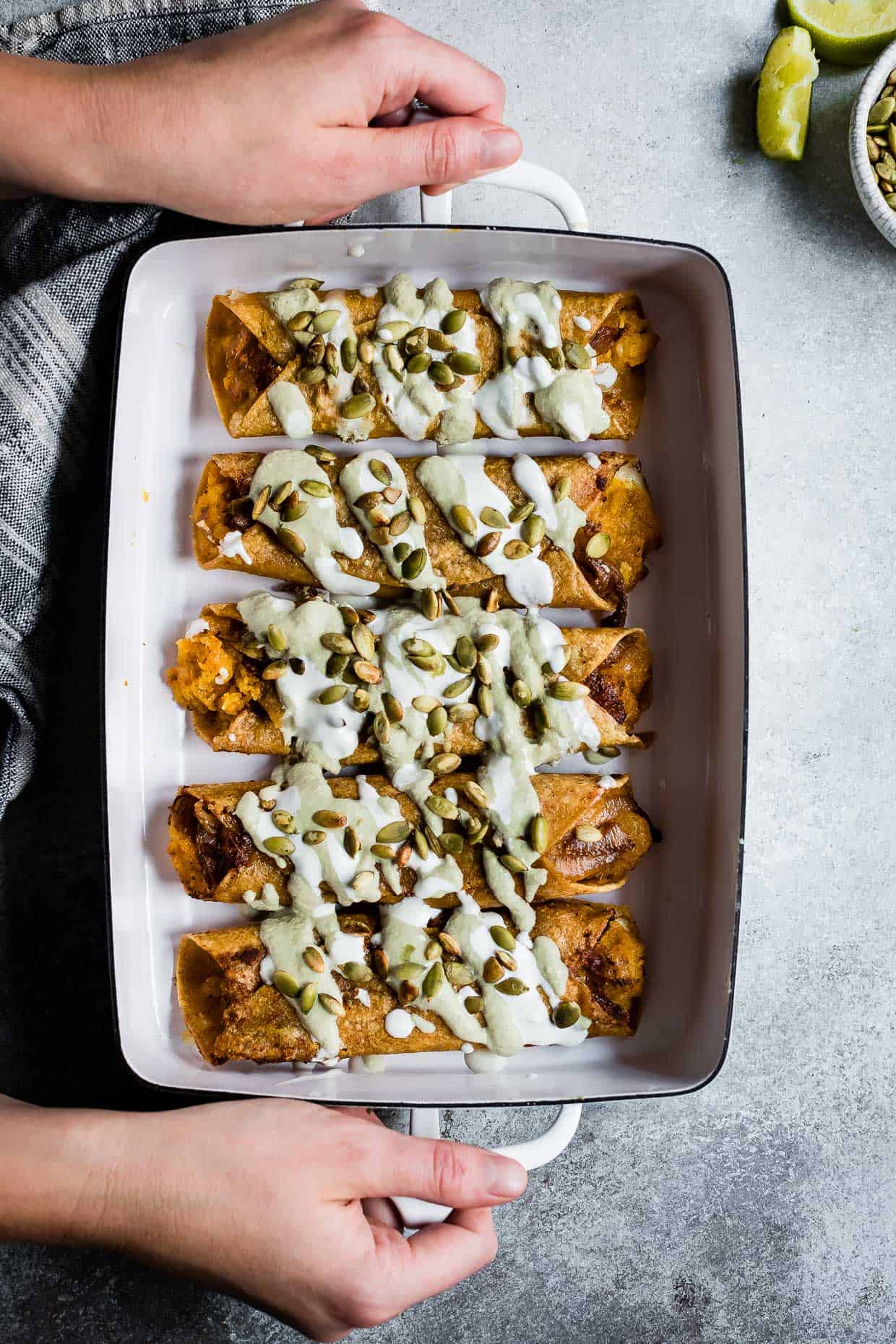 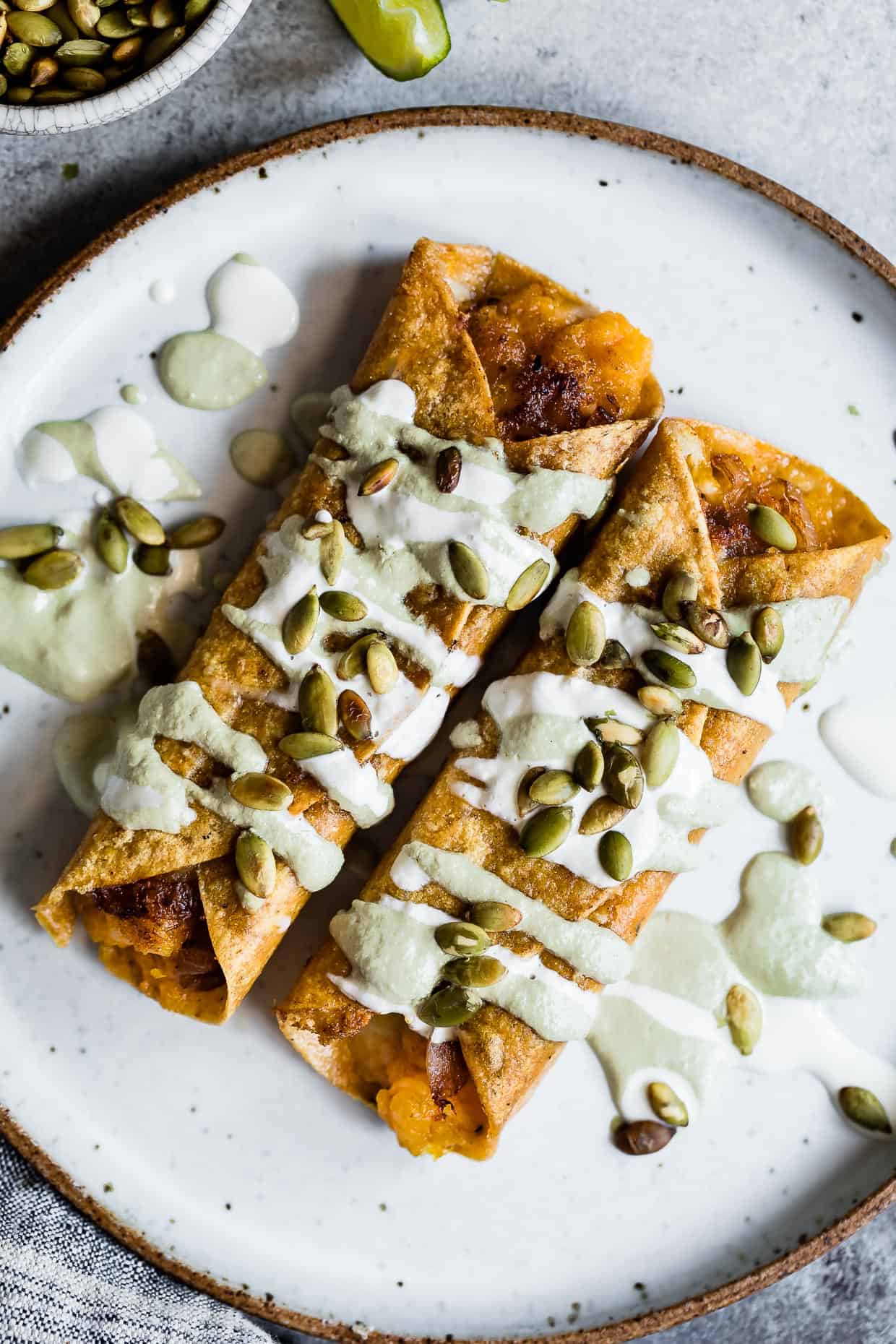 This got me thinking. When we visited my cousin's farm late September, the cherry tomatoes and pluots were trickling out with winter squash ready for the picking. Even so, he told us restaurants weren't yet ready for them. Late summer was still on the menu.

Apparently this is not a concern though because winter squash lasts for a long time. He still has butternuts in his barn from last fall that are perfectly good! "That's why they call them winter squash," he told me.

I can't help but wonder if this means the first butternuts at the market might actually be from last year's crop? (Could it really be?)

And even further, what if our rotten pumpkin was actually from last year's crop too? In my memory, we picked this pumpkin right off the vine, but thinking back, we didn't really. Sure, there were plenty of pumpkins growing on the vines, but there were just as many cut pumpkins littered throughout the rows. And that's what we chose.

What if they were staged?! It's a pumpkin conspiracy! More likely we just bought a rotten pumpkin, but sticking decoy pumpkins into the patch does sound like a pretty good way to peddle old squash, if you ask me. 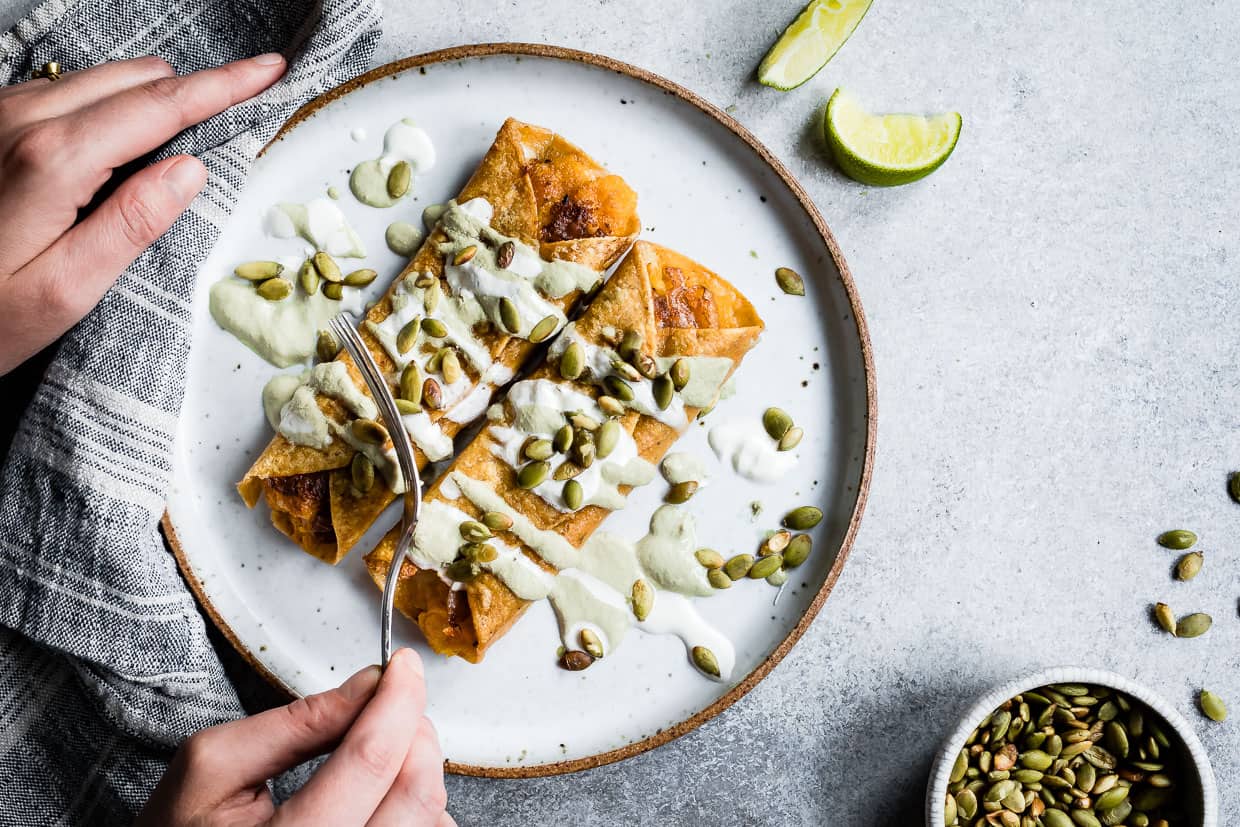 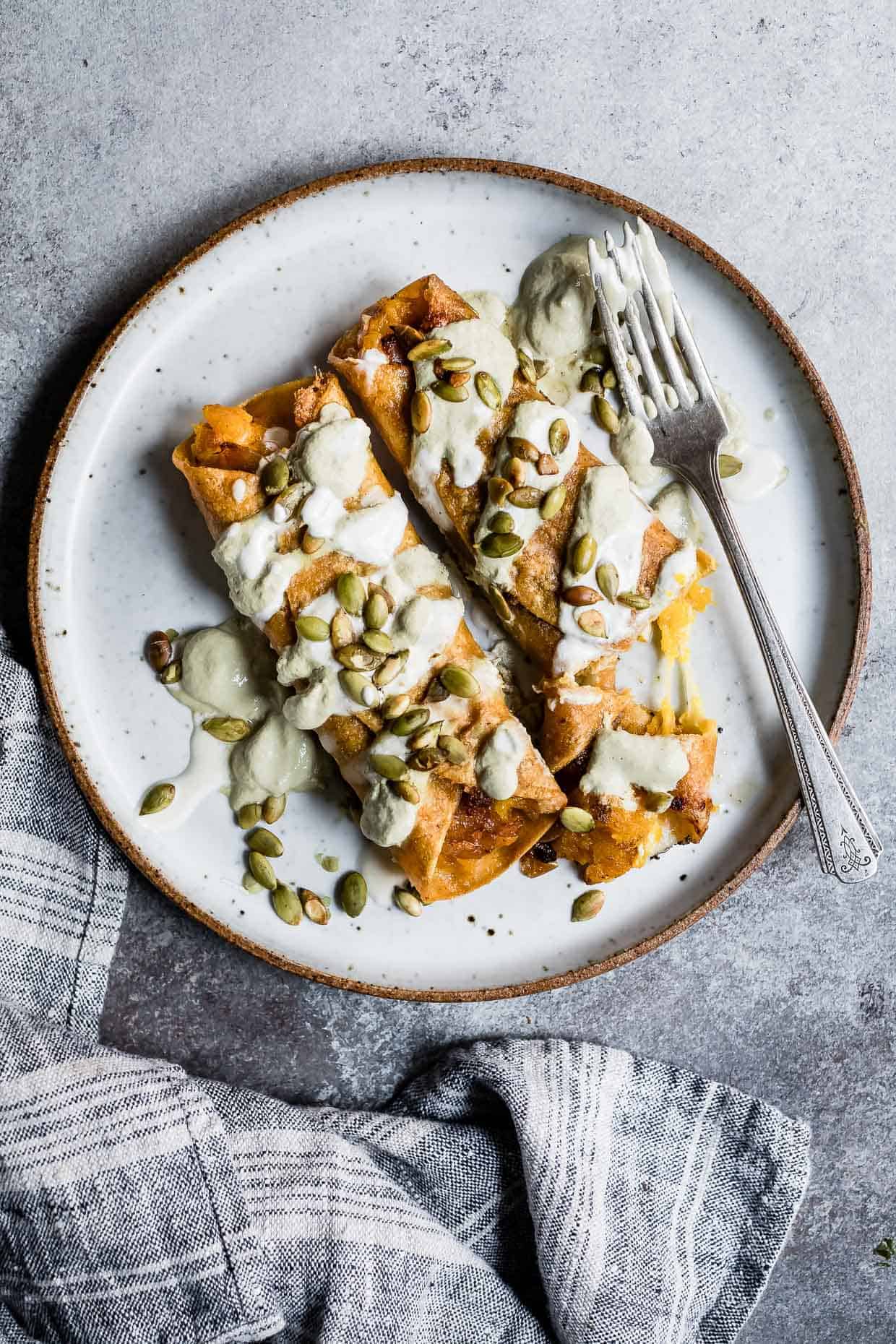 Don't go shopping in a pumpkin patch for these cheesy pumpkin taquitos. You'll need a sugar or pie pumpkin (or a butternut will do too!) from the market. Tortillas rolled up with smoky sweet pumpkin, caramelized onions, and nutty Roth Grand Cru, then fried for a crispy shell and melty cheesy filling. I have a major crush on this cheese and its versatile ability to go from snacking cheese to melty filling.

A roasted jalapeño pumpkin seed crema on top bring a little refreshing heat, but don't let that intimidate you from making these taquitos! If you want to save time, just blend up the roasted jalapeño with some crema or sour cream, a little lime juice, and salt for a modified topping.

But whatever you do, don't skip the cheese.

None of these videos would be possible without the help of my videography partner, Alanna. See more of our videos on our Storied Provisions channel!

Disclosure: Special thanks to Roth Cheese for sponsoring this post! And thanks to you for supporting the companies that keep Snixy Kitchen cooking!
Continue to Content 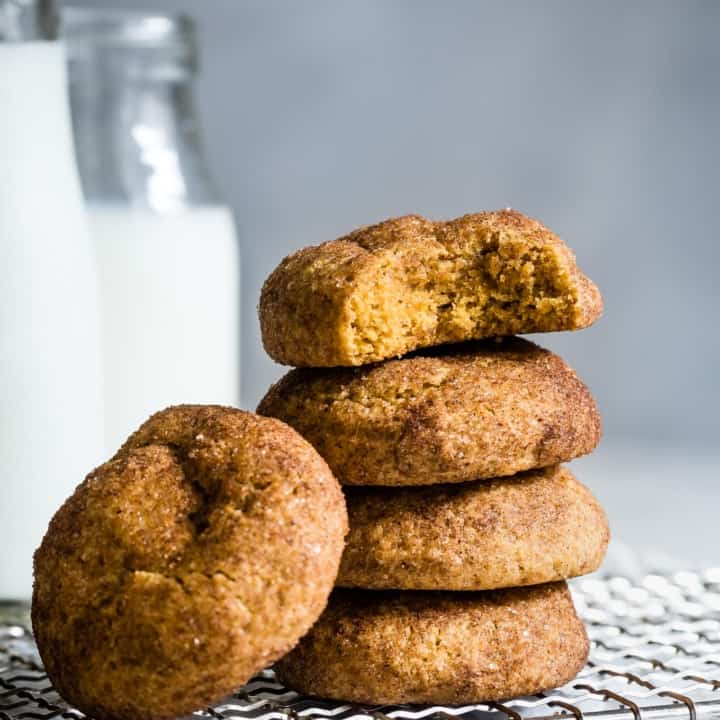